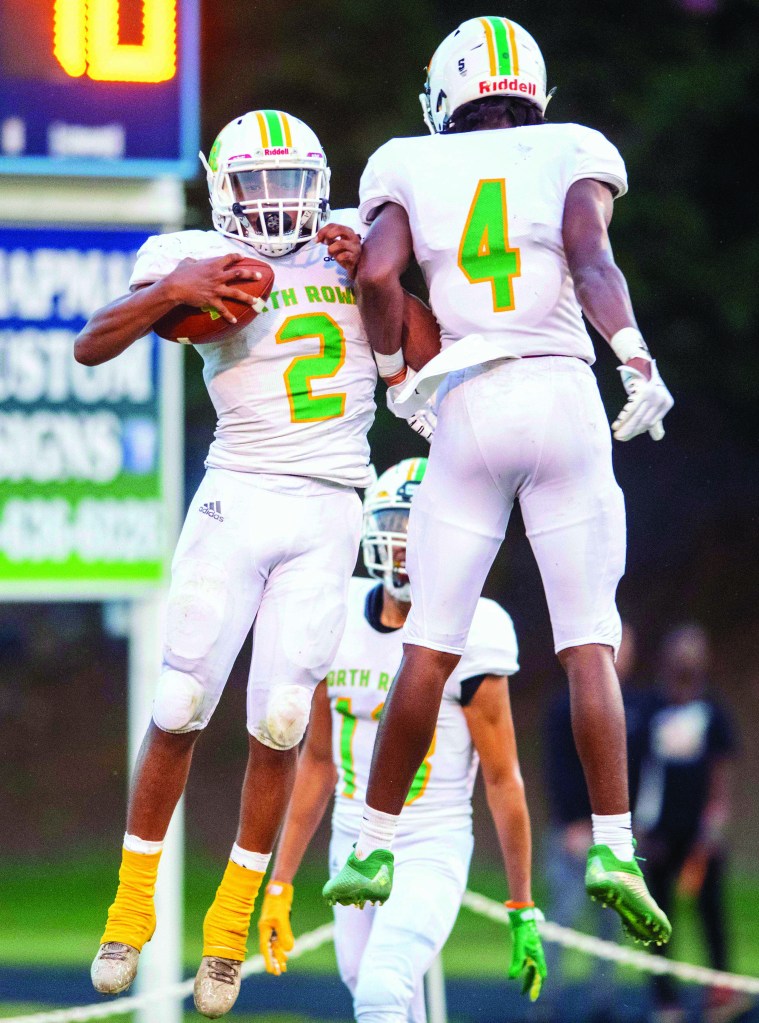 DENTON — Life has a sense of humor, and North Rowan receiver Amari McArthur broke two school records with his starting quarterback on the sidelines.

Naz Stinson, a backup QB who does a little of everything for the Cavaliers, did most of the throwing on Friday because .starter Jeremiah Alford was still feeling the affects of a physical West Rowan game.

“Jeremiah got banged up a little bit,” North head coach Nygel Pearson explained. “Jeremiah was cleared to go for South Davidson, but we wanted to be extra-cautious (with Thomasville next week), so we went with Naz.”

McArthur, a 6-foot-3, 190-pound wideout who has offers from Richmond, Elon, South Carolina State and Lenoir-Rhyne, had not gotten off to a quick start this season.

Through four games, McArthur, who earned the nickname “The General” during his monster 2021 season, owned a modest 12 catches for 150 yards and a touchdown.

Stinson hit McArthur for the touchdown pass that started the scoring at South Davidson. That was the 23rd TD catch of McArthur’s career. Miller had 22 TD receptions before he moved to quarterback midway through his astounding career (1998-2001).

The rest of the half belonged to North’s junior running back Jameias Morrow. Morrow had a 13-yard scoring run and a 30-yard scoring run. When a snap was fumbled, Morrow picked it up and went 73 yards for another touchdown.

South Davidson scored late in the second quarter on the ground, so the Cavaliers took a 26-6 lead to halftime.

When a South Davidson onsides kickoff was unsuccessful at the outset of the second half, North scored in just 30 seconds. Stinson found McArthur from 27 yards out for his second touchdown pass and McArthur’s 24th career touchdown.

“We got Amari going a little bit tonight,” Pearson said. “That was good.”

When Stinson got banged up, Alford entered the contest and proved he was healthy. He hit jayvee star Ason Best for a 57-yard touchdown with 2:12 left in the game.

North generally beats South Davidson by more than that, but Pearson was satisfied with the effort.

“South Davidson is better than they were last year, and we were down quite a few guys tonight,” Pearson said. “Most of them should be back next week.”

McArthur came into the game with 1,881 receiving yards and was able to surpass Gaymon’s school record of 1,990. Gaymon set that record in 2007.

McArthur is in the all-time top 10 in receiving yards in the county.

Now the Cavaliers have to get ready for a hard-running Thomasville team that was whipped 35-12 on Friday by Salisbury.

But North’s defense is a lot better than it was a year ago — and now “The General” is heating up.