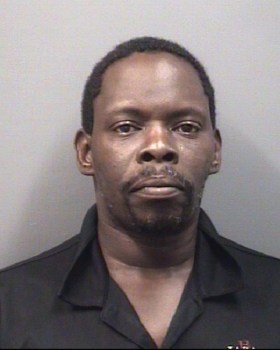 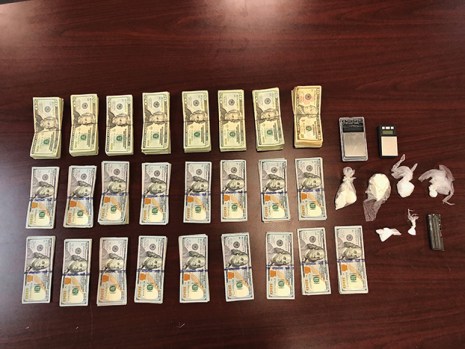 The money and drugs seized during a search of a home on Wildwood Road, which authorities targeted due to the residence's role in several crimes. Photo submitted by the Rowan County Sheriff's Office.

SALISBURY — Rowan County deputies recovered $24,500 in cash and more than two and a half ounces of cocaine during a raid on a house at 5840 Wildwood Road on Wednesday.

They also arrested and charged Lerenzo “Grump” Harris, 39, with a number of drug offenses.

Detectives had been investigating the residence since the deceased body of Rodney Craig Edwards was found discarded near High Rock Lake in Rowan County on April 2. Edwards, 56, apparently died from an overdose. Weeks after the body was discovered, the Rowan County Sheriff’s Office arrested and charged Jonathan Paul Holshouser, 39, and Bobbi Jo Rowland, 40, with concealing Edwards’ death. In early May, a third person, Suzy Ellen Moody, 37, was charged with the same crime.

While investigating the incident, authorities say they learned that narcotics were being sold out of the home by Harris, and that he may have also been involved in the concealment of Edwards’ death.

Detectives continued to stay focused on the Wildwood Road home when Ronnie Dale Hoots was killed there on May 20. The Rowan County Sheriff’s Office arrested Erick Brown for the crime. During a search of the home as part of that investigation, a small amount of drugs were located, and as a result, arrest warrants were obtained charging Harris with possession of cocaine.

When detectives arrived to arrest him on those charges on June 1, Harris was found with a substantial amount of “crack” cocaine and money in his pockets, according to the Rowan County Sheriff’s Office. Detectives were able to obtain a search warrant for the property, and located a total of 72 grams of cocaine, or about two and a half ounces, and “crack” cocaine along with various types of paraphernalia, such as baggies and scales. They also found more than $24,500 in cash hidden in the home.

In 2007, detectives with the sheriff’s office were able to charge him with similar charges related to selling cocaine out of his residence. He was only 24 years old at that time.