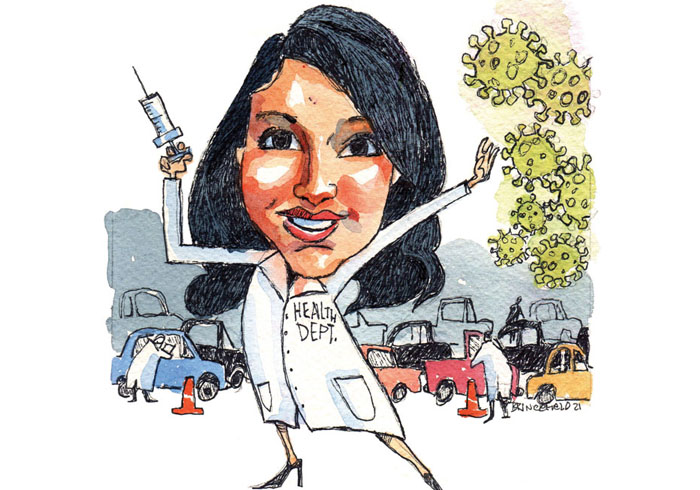 2021 Newsmaker of the Year: Health Director Alyssa Harris. Illustration by Mark Brincefield, for the Salisbury Post.

SALISBURY — Whenever Jane Smith-Steinberg sees her granddaughter’s name in the newspaper, she grabs a pair of scissors, cuts out the article and posts it in a scrapbook.

Smith-Steinberg started collecting clippings when Alyssa Harris, her granddaughter, first appeared in the news for her work with Healthy Rowan, which is a coalition focused on identifying and addressing health and quality of life issues. She has continued her scrapbooking hobby as Harris has risen the ranks at the Health Department.

Smith-Steinberg and her scissors had a busy 2021.

Harris was selected as Rowan County’s Health Director in May after leading the department as interim director since mid-February. She has been front and center since — at Board of Commissioners meetings, talking to the Rowan-Salisbury School Board, providing the most current information and advice on television interview and; coordinating vaccine clinics at West End Plaza.

“She has been phenomenal,” said Dari Caldwell, chair of the Board of Health. “She stepped in and hit the ground running.”

During a year in which the COVID-19 death toll in America surpassed 800,000, the Salisbury Post’s newsmaker of the year is the 32-year-old who has helped orchestrate Rowan County’s pandemic response while keeping the rest of the more than 80-person department running.

With rain coming down and the forecast showing a chance of hail, Harris was handed a walkie-talkie. Suddenly in charge, it was her call whether to go through with the planned vaccination clinic at West End Plaza.

“That was a really scary first day,” Harris said.

Harris had only been named interim director of the Rowan County Health Department the day before, tasked with filling in for Nina Oliver, who left the position for a similar role in Eastern North Carolina.

“We needed somebody to step in immediately, like that day, to take over and keep things rolling until we could do the complete search for a director,” Caldwell said. “Alyssa was the obvious candidate because she had the credentials to serve as a health director.”

The unpredictable, stormy weather on that February day added another challenge to an already complicated task. The Health Department was in the midst of making improvements to its vaccination clinics, which had at first been plagued by long wait times and confusion. Despite having little to do with the organizational planning of the clinics prior to that day, Harris suddenly found herself overseeing one.

“Literally at the end of that day, we were sitting down and trying to make a plan to figure out how we were going to move forward when we were having such bad weather with vaccine events,” Harris said.

Not only did Harris have to deal with that on day one, but she also was suddenly part of the county’s response to complaints over a resident using deer carcasses to feed his dogs. The carcasses, neighbors told the Rowan County Board of Commissioners, were drawing hordes of buzzards.

“It was 8 p.m. and I got an email asking for an update on the carcass situation,” Harris said.

As Harris puts it, there was “a lot going on those first couple of days.”

Despite the avalanche of new responsibilities, Harris didn’t shy away from the task and honed in on making the clinics better.

“What had previously been pretty much chaos around trying to organize the vaccines for this county, she quickly brought organization and structure to it,” Caldwell said. “She was able to reach out to the community to all of the other providers that had a finger in the pie around vaccines, pull everybody together and help create a comprehensive approach for our county.”

Having proven to herself that she could handle the role, Harris applied to be the county’s permanent health director when the Board of Health initiated a country-wide search in April.

“I felt like I was successful and was able to do it,” Harris said. “So, I was like, ‘I want to keep doing this. This is great. We’re helping people. We’re moving forward.’ I just saw so much opportunity and I didn’t want to lose the opportunity.”

Harris was born in Charleston and spent her first few years in Connecticut, but was raised in Rowan County after her father retired from the Navy and moved back home. Harris attended Erwin Middle School and was among the first classes to graduate from Gray Stone Day School. She enrolled at the University of North Carolina at Chapel Hill and went on to earn a master’s in health promotion, education and behavior from the University of South Carolina.

Harris returned to North Carolina to work with the Healthy Cabarrus organization. Soon after, Caldwell and other public health leaders in Rowan asked if she could help them run a similar program.

“Watching her ability to get a tremendous amount accomplished in a short amount of time, seeing her organizational skills, I just looked at her and thought, ‘Holy cow, here’s a leader for the future,’” Caldwell said. “Absolutely. Hands down.”

What Caldwell saw in Harris years ago proved to be true. After several rounds of interviews, Harris in May was elevated from her temporary title and announced as health director.

Harris became a mainstay at local board meetings, especially when school came back in session in the fall and quarantine numbers skyrocketed. With nearly 1,000 students quarantined due to exposure, Harris encouraged the Rowan-Salisbury School Board to implement a temporary mask mandate.

The recommendation received pushback from public commenters and several school board members. The board voted 4-2 in favor of the mandate, which Harris considered to be a win for public health.

After the mandate went into effect, more than a dozen people criticized the decision publicly during the next board of education meeting. Others vented their frustration online, some calling out the Health Department and Harris specifically.

“Social media is a great thing and it’s a terrible thing,” Harris said. “Seeing people talk about me in comments on things and not know me as a person is so frustrating. Wanting to say I’m big government or I’m the pocket of whoever is so crazy to me because a person, a Rowan County citizen. That has been hard and it’s hard not to respond and it’s hard not to take it personally.”

When COVID-19 case numbers spiked in the fall, Harris was asked to weigh in on the safety of hosting large gatherings. Due to risks of bringing thousands downtown when Rowan was seeing a high rate of transmission and hospital beds were once again in short supply, several major events including the Cheerwine Festival and Pops at the Post were canceled.

Others, including the Rowan County Fair and Autumn Jubilee, were hosted with COVID-19 protocols in place. Harris and her staff at the Health Department helped formulate procedures for the Autumn Jubilee, which attracted several thousand people to Dan Nicholas Park.

With the promotion, Harris became one of only 87 health directors in the state of North Carolina. She gained purview over an almost $10 million budget, more than 80 staff members and a half-dozen different divisions.

The Health Department offers a wide range of services, including dental care through its Smile Center, the Women, Infants and Children (WIC) nutrition program, immunizations, onsite wastewater assessment and food and lodging inspections. The department is so large that it can’t all fit in its main building on East Innes Street.

Although the pandemic demanded much of the Health Department’s attention again in 2021, Harris had to ensure the rest of the department continued to function normally as well.

“There’s lots of different facets to the Health Department, and (Harris) understands all of those and understands how important they are,” Caldwell said. “So, when you do have a pandemic, and it becomes overwhelming, you still have to figure out a way to get all the other stuff done too.”

In the summer, Harris and the department navigated Medicaid transformation — a statewide overhaul of the way health departments care for patients.

“It was fee for service. So, you’re coming in and your insurance company is paying because you got a vaccine,” Harris said. “Versus now we’re looking at how a person exists in a system and the (insurance company) is going to pay us money to keep them healthy and everything that surrounds keeping them healthy.”

In the fall, Harris and the Rowan County Board of Commissioners also moved forward with conducting a space study to determine the department’s biggest physical needs and how to meet them.

Earlier this month, Harris came before the Rowan County Board of Commissioners to request funding for the department’s Post Overdose Response Team. Established in 2019, the small team works to prevent and respond to opioid-related overdoses in the county. The team has been nearly overwhelmed with work since the pandemic started, as overdoses in Rowan County skyrocketed.

PORT was set to run out of funding at the end of 2021, but Harris and others were able to convince commissioners to fund the program through June.

“To me, that was a huge, huge victory,” Harris said.

Whether it’s responding to a pandemic or leading the Health Department’s normal programs and services, Caldwell said Rowan Countians should be glad to have Harris in charge.

“The community would be well-advised to put a tremendous amount of trust in (Harris) and her decision making,” Caldwell said. “She truly has the best interest of the community at heart.”