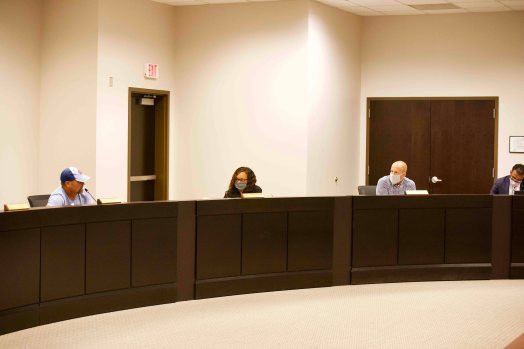 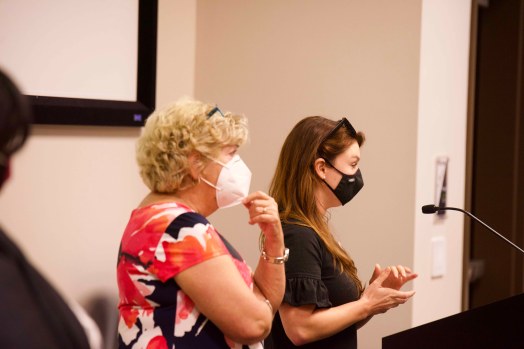 Carl Blankenship/Salisbury Post - Rowan County Health Department Director Alyssa Harris and Rowan County Board of Health Chair Dari Caldwell at the podium. Harris advised the board her job is to keep cascading infections from happening.

SALISBURY — The Rowan-Salisbury Schools Board of Education will require masks in its buildings for the next two weeks after a 4-2 vote at an emergency meeting on Wednesday.

The motion requires everyone, regardless of vaccination status, to wear a mask indoors. Masks are not required outdoors. They are required on school buses.

Byrd-Clark said one positive case is too many for her and that the district is starting the school year on the wrong foot.

“For me, getting vaccinated and wearing a mask is beyond politics,” Byrd-Clark said. “It has nothing to do with my political affiliation.”

Just one week into the school year, Superintendent Tony Watlington on Wednesday said the district has 751 students in quarantine, not including an individual school which may have 100 quarantines on its own. RSS Chief Student Services Officer April Kuhn said there are at least 50 students who never stepped foot on campus and are not included in the quarantine total.

Watlington said the number of quarantines would cause attendance rates to be “counterproductive to our goal of keeping students in school five days a week” if RSS didn’t change course. The superintendent also said he is concerned about an emotional toll from the instability of increased quarantines.

On Wednesday, there were 26 positive staff cases and 64 staff in quarantine, though a total of 200 staff were absent that day. There also were 35 student positives — a number that has jumped significantly. Only three student and 19 employee positives were reported Friday. Kelly Education, the company RSS contracts with to manage its substitutes, was only able to fill just over half its 201 absences on Wednesday.

The meeting on Wednesday filled to seating capacity and there were four police officers present. People in the audience variably clapped or jeered at comments from the board in favor of mandating masks or keeping them optional. Most of the audience was masked.

“I can’t think of anybody more precious than a student,” Kennedy said. “I’m not trying to impress anybody. As a parent, had my children been in school, or my grandson, and something like this happened, I would want him to be where he’s safe. I’m so sorry you’re not getting what you want to do. Things will never be the way they have been. We’ll have to adjust our lives to what is best for us.”

Jones said he voted for masks being optional in July. In the first week, however, Jones sid he has seen too many people who have not had the choice to stay in school because of quarantines.

Hightower openly considered whether he would vote for the mandate and decided he would vote in favor to help keep kids in schools.

“Our position as a board should be to keep kids in school because that’s the best way to educate them,” he said.

Hunter announced his intention to vote against the mandate because he believes families should have a choice. Allen compared the freedom to not wear a mask to his opinion about Black Lives Matter protests last summer.

“The narrative across the nation last year was to stand up for your rights, to protest, to do what you want to do, don’t take it from the government, stand up, burn that building down if you want to burn it down, but stand on your rights,” Allen said. “If it works for them, it can work for us.”

The vote is in line with state guidance strongly recommending masks. An hour before the meeting, Gov. Roy Cooper held a briefing and told a reporter the state is looking for local buy-in for the guidance and focusing on the vaccine program. Though, state mandates are still on the table in the future.

Other nearby districts, including Kannapolis City Schools, Mooresville Schools and Cabarrus County Schools have reversed course on mask requirements heading into the current school years, citing the explosion of cases.

Now, a majority of students in the state will attend schools with mask mandates this semester.

Besides masks, the quarantine duration for Rowan-Salisbury Schools was a major topic of discussion on Wednesday. The Rowan County Health Department sets the duration at 10 days. A student is considered exposed, per state guidance, if they are within 6 feet of a student who has tested positive for 15 minutes or more. Exceptions to the rule include people who were correctly wearing masks at the time in school and people who are vaccinated. The maximum recommended is 14 days but Rowan County Health Director Alyssa Harris said that 10 days covers the majority of times between exposure and infection.

“My job as the public health director is to prevent the spread of disease,” Harris said. “It is to prevent people from going back into the school and leading into this cascade of other positives.”

Allen asked what repercussions would result if the district refused quarantine rules.

Board attorney Ken Soo said disobeying quarantine rules would be a violation of the law, which the board members all took an oath to uphold.

Hightower pointed out there are inconsistencies in quarantine policies between southern states, with some instituting broader rules than others. He said the number of quarantines does not make sense to him because many of those students will not contract COVID-19.

“Common sense tells me that maybe one or two of them probably got it if we go off a percentage,” Hightower said.

Harris said of the 164 positive cases in people age 0-17 in the county in the last two weeks, none have been hospitalized, but that is not the point.

“That’s not where want to go,” Harris said. “Our goal is to not have students hospitalized, it’s not see pediatric ICUs fill up and we also don’t know the long term effects on children for COVID. Our goal is not to have sick kids in this community.”