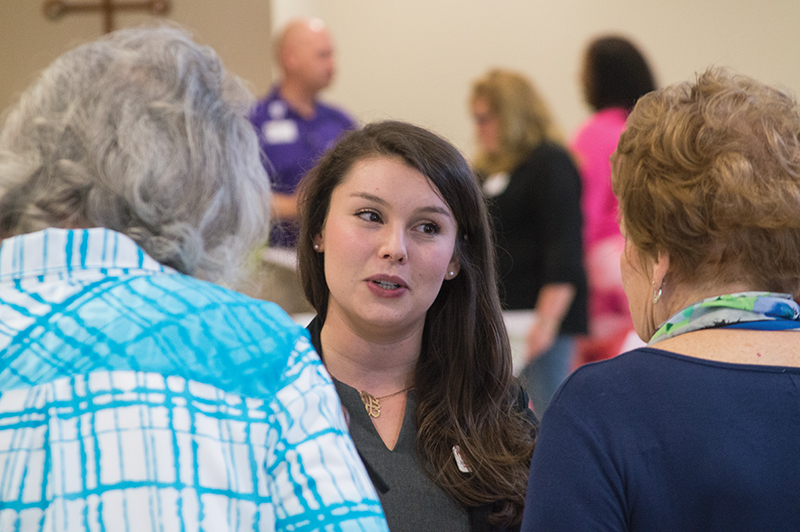 Josh Bergeron / Salisbury Post - Alyssa Harris in 2017 talks with attendees at a Rowan County Chamber of Commerce Power in Partnership Breakfast. She spoke about health indicators in Rowan County.

SALISBURY — The Rowan Board of Health named Alyssa Harris the county’s health director during a called meeting Tuesday night.

“I am honored to have been selected to lead the Rowan County Health Department. I am excited for the opportunity to promote and protect health in Rowan County as public health enters a renaissance,” Harris said in a news release. “We have a dedicated team of public health professionals who are committed to the citizens of Rowan and have done a fantastic job in response to the pandemic.”

Harris has been acting as interim health director since Nina Oliver resigned to take a similar position in Carteret County in February. The “interim” title can now be removed.

“(Harris) has a lot of good experience and we felt that she was hands down the best candidate,” said Dari Caldwell, chair of the Board of Health. “We felt that she answered the questions well during the interview and I really think she brings a breath of fresh air to the Health Department.”

As health director, Harris will oversee a department of over 80 personnel. She will be charged with establishing and directing the execution of programs to ensure health of Rowan Countians is protected and that community health needs and problems are identified and met.

“My goal is for all citizens to see the health department as a place they can receive information to promote healthier lifestyles, to prevent the spread of illness, and that we work diligently to protect the health of our community,” Harris said. “I plan to ensure Rowan County public health remains a strong and forward-thinking community partner as we work towards a healthier future.”

Harris graduated from the University of North Carolina Chapel Hill with a degree in psychology and holds a master’s in public health from the University of South Carolina. She has 10 years of experience in health programming and research. Harris, a Rowan County native, came back home for work as the executive director of Healthy Rowan. She was hired as community health manager for Rowan County in 2019 and served in that position until she was elevated to interim health director earlier this year.

Harris was chosen as health director after a nationwide search was conducted with the help of consultant Fred Pilkington. The board whittled applicants down to 12 finalists, conducted interviews with the top five and finally focused in on the top two candidates.  The final two were interviewed by a panel of community stakeholders, a panel of health department staff members and the Board of Health.

“The feedback was overwhelming in favor of Alyssa Harris,” Caldwell said.