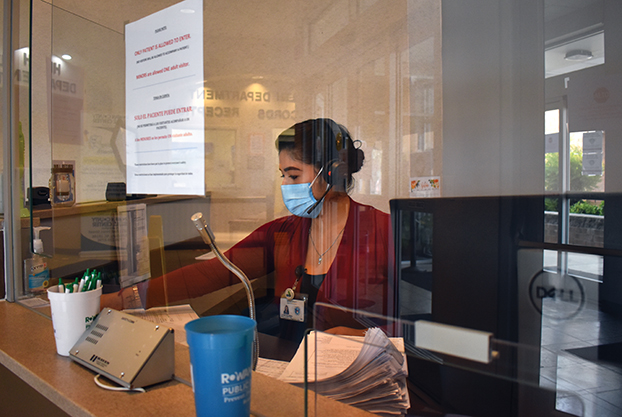 SALISBURY — Walking through the maze-like hallways of the Rowan County Health Department, Health Director Alyssa Harris sees a lack of room for improvement.

There are small, roped-off waiting areas and “cube farms” where employees work together in close quarters. A repurposed community room is filled with COVID-19 response staff. Boxes of supplies are stacked in the corner of an office with nowhere else to go.

The Health Department is primarily located at 1811 E. Innes St. in a renovated Brendle’s store. The building contains the Smile Center, administrative offices, exam rooms and laboratory space. It’s also where the department administers its Women, Infants and Children Program, provides immunizations and helps clients with family planning and care management, among other services. The Environmental Health Division, which is under the Health Department’s purview and conducts soil inspections and food and lodging inspections, is located several miles away at 402 N. Main St.

While the Health Department’s headquarters have supported its operations for the past two decades, Harris said the growing division has outpaced its facilities.

“We are in pretty tight quarters,” Harris said. “I’m not saying we want the department to grow unnecessarily, but if there’s an opportunity for us to address and support the community, we want to do that and part of that is having a good space to do it in.”

That’s why Rowan County is in discussions with ADW Architects for the Charlotte-based firm to conduct a space needs study for the Health Department. The study will evaluate the department’s current facilities and make recommendations for the future. County Manager Aaron Church said the contract with ADW Architects will likely be on an upcoming agenda for the Rowan County Board of Commissioners to consider.

ADW Architects conducted a comprehensive study in 2015 that included all of the county’s various divisions, from social services to tax administration. The results of the study indicated the Health Department was one of many in need of more room.

The study showed the Health Department’s physical footprint boasted several positives. Its primary location on East Innes Street was deemed satisfactory for customer access. The exam rooms and negative pressure rooms were of adequate number and use. The lab was sufficient and the physical facility was found to be in good condition.

The Health Department also is attached to the Department of Social Services, which helps the two divisions communicate and provide collaborative care for clients. The county has discussed moving Social Services as well, another department identified as having space needs in the 2015 survey.

The list of challenges highlighted by the 2015 study for the Health Department was twice as long.

The study indicated there was generally no room for growth, not a sufficient number of parking spaces for clients and the appointment desks were not private enough. Additionally, the study indicated the physical separation between most of the Health Department and Environmental Health was not ideal.

“What they found in that space study was that by this time, 2020-21, we would really need a much larger space,” Harris said. “We’re going back to work with ADW to ask them to reassess. Where are we from where we said we needed to be? Do we need that much space? Is that still an appropriate response?”

The Health Department’s need for space has been worsened by the COVID-19 pandemic, which forced the department to make physical and strategic adjustments.

The community room has been converted into the department’s COVID-19 command center, where a handful of staff members coordinate the county’s response to the ongoing pandemic.

Since the community room is where the Board of Health meets, the 11-person advisory committee has been convening virtually since the start of the pandemic. Having adequate space for the board to meet, board member and county commissioner Judy Klusman said, would be helpful.

“We have several new members and other than knowing their face and their name and a few comments they make at the meetings, I don’t really know these folks,” Klusman said. “I would love to get to know them because I know they’re dedicated to public health.”

The community room isn’t the only area inside the Health Department building impacted by the pandemic. Several small waiting rooms for clients have been roped off because they aren’t spacious enough to allow for social distancing. 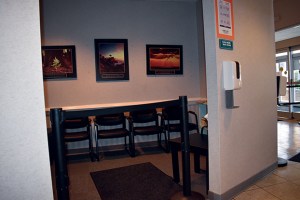 A small waiting area at the Health Department has been roped off because it does not allow enough room for social distancing. Rowan County is preparing to conduct a study to assess the department’s space needs. Ben Stansell/Salisbury Post

To keep contact between clients to a minimum, a staff member is stationed at a newly-constructed enclosed desk to screen clients for COVID and direct them to the right spot.

“We do not have proper separation of patients,” Klusman said. “Someone who maybe has a virus would have to sit in the same area with someone who has a baby who is doing a well check.”

Even when the pandemic is over and several temporary positions are no longer needed, Harris said the space needs won’t go away.

The roughly 70 employees who work at the Health Department’s East Innes Street location are close together, but they could be forced even closer if the department fills a number of open positions. There’s also the chance, Harris said, that the department could add new positions if state funding for public health workforce development comes to fruition.

“If that leads to additional funding for staff it’s really going to be a struggle to find them places to sit,” Harris said.

The Health Department already has to host department-wide meetings at West End Plaza because it’s the only place large enough. That requires its staff members in two separate locations to drive across Salisbury.

Although the county likely won’t take action on moving the department until the study is completed, signs point to West End Plaza as the department’s eventual home. The county-owned former mall is where the department headquartered its COVID-19 response earlier this year.

“With the pandemic itself, being able to set up like we did out at West End Plaza was so valuable,” Klusman said. “We learned so much by doing that. The previous commission purchased the building saying that we needed to look at putting DSS and the Health Department out there and so we’re starting with health because they’re the folks who have the most dire need.”

Klusman also pointed out that there is little room at 1811 E. Innes St. for the county to build onto the department’s current facility without taking much-needed parking spaces away from clients.

Harris agrees that West End Plaza would serve the Health Department well and already has ideas for how she might use the additional room. At the top of her wishlist is a large community gathering space, bigger than the room currently being used as the COVID command center.

“If we could have more activities where people from the community are coming here, I think that would help people understand what it is that we do and why we’re important and see us as that chief health strategist place, that they know the Health Department is where they go to get healthy,” Harris said,

Having more room would also allow the department to bring environmental health and the rest of its services together in one place.

“We have a whole department that isn’t even here,” Harris said. “I think that’s another big issue is we don’t have all of our staff under one roof. Not that it’s necessary for ensuring all of the stuff gets done, but I think being that one-stop-shop for citizens is really important for me.”

More space, however it comes, would fit in with her vision of making the Health Department “a place for everyone,” Harris said.