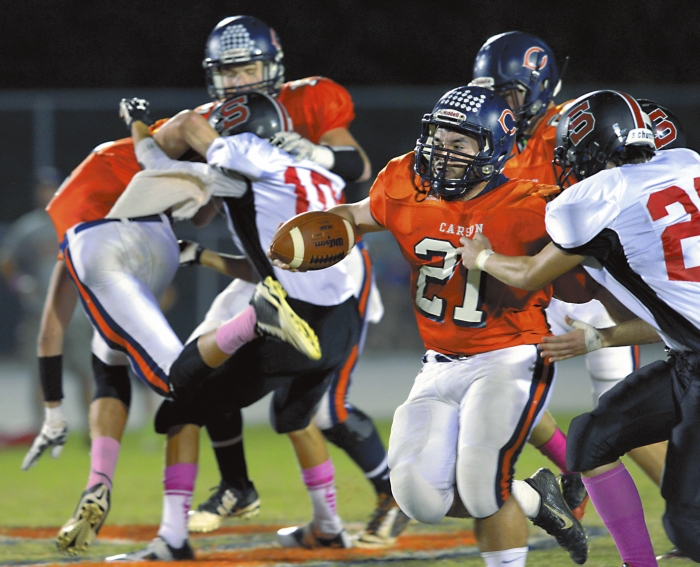 Carson's Dylan Livengood 21 on a nice run up the middle. photo by Wayne Hinshaw, for the Salisbury Post

CHINA GROVE — Carson trampled South Rowan for 424 rushing yards, got three touchdowns from Dylan Livengood and beat the Raiders 51-10 on Friday for their sixth straight win in the neighborhood rivalry.
But for one play, at least, South Rowan beat Carson at its own game.
Carson’s pet call is the hook-and-ladder pass play, but South Rowan scored a touchdown on its first offensive snap when QB Heath Barringer, receiver Tyler Rary and slot back Austin Chrismon teamed up to burn the Cougars on the hook-and-ladder for 87 yards. Barringer passed to Rary at the 20, and after taking a lateral from Rary in stride, Chrismon’s wheels did the rest.
“We put that play in early this week,” said a battered Barringer, who managed a small smile. “The hook-and-ladder, that’s Carson’s play. We wanted to hit them with it on our very first play.”
Carson coach Joe Pinyan wanted to fume as Chrismon went racing down the sideline, but he had to smile on the inside. South’s first-year head coach Daniel Yow is a former Pinyan apprentice when they both coached at Salisbury.
“There was nothing to do but tip the hat to South on the hook-and-ladder,” Pinyan said. “Hey, give them credit. They executed.”
Other than that one scintillating dash that got South fans fired up, five booming Marshall Long punts (he averaged 47.8 yards) and a 45-yard Brennan Lambert field goal late in the first half, there wasn’t much for the visitors to shout about.
Carson led 23-10 at halftime.
“It was a tale of two halves,” Yow said. “The first half was one of the best halves we’ve played this season, but the second half was one of the worst.”
Carson (4-3, 2-3 SPC) owned the line of scrimmage on both sides of the ball and buried the Raiders (0-7, 0-5 SPC) in the third quarter, pulling away steadily as South’s defense wore down.
“That’s the best our O-line has blocked all year,” said Livengood, who darted for 152 rushing yards, 124 of them before halftime. “All week the coaching staff preached to finish off our drives and tonight we did. We weren’t doing anything fancy — just tosses and traps mostly — but with the kind of blocking we had, they couldn’t stop us.”
Carson went ahead 8-0 on the first drive of the game, smashing 80 yards, with Owen White throwing short passes and Andy Lear (119 rushing yards) breaking tackles.
South answered with the hook-and-ladder to make it 8-7.
Livengood capped two drives with short TD runs for a 23-7 lead, but Lambert’s field goal sent the Raiders to the break down 13 points and believing they still had a chance.
Carson’s defense was on the field first in the second half and forced a quick three-and-out.
“In the first half, we were squeezing in and Barringer was breaking containment outside and getting yards,” Carson linebacker Blake Daniels said. “We stopped that in the second half.”
Long flipped field position after that stop with a soaring punt, but Carson rolled 73 yards. Livengood’s third TD made it 30-10.
Then South’s second possession of the second half also bogged down.
“Carson’s defense was really quick off the ball and we had a tough time blocking them,” Barringer said. “Sometimes the pressure was coming inside, sometimes it came from the outside, but it was always coming from somewhere. In the first half, we moved the ball, but in the second half, we just stopped.”
After Carson’s second stop of the half, Pinyan reached into his own bag of tricks for the backbreaking play. It was a throwback pass to his sophomore QB, with receiver Brandon Huneycutt tossing the ball downfield to a wide-open White. White broke several tackles on a 78-yard play that went all the way to the South Rowan 5-yard line. Then White got the TD on a sneak from the 1, and it was 37-10.
“They pulled a trick on us, so it was only fair us to use one too,” Pinyan said. “Our quarterback led us in receiving yards tonight and our receiver probably led us in passing yards. That’s not an average night.”
Carson played everyone that had a uniform, but South turned it over frequently. Matthew Beaver recovered a fumble for the Cougars, while DJ Fulcher and Luis Cipres picked off passes.
Reserve backs Bailey Rayfield and Jay Wilkerson punched in fourth-quarter TDs as the score mounted.
“We lost the penalty battle tonight, and that’s one we couldn’t afford to lose,” Yow said. “We stopped ourselves with penalties a lot. We’re not good enough to make first downs if we have a penalty or a negative play.”
Carson’s Austin Lear had a solid game, gaining yards wearing No. 23 and then getting more yardage after his jersey was ripped and he had to change to No. 26.
But most of the ripping was done by the Cougars.
“We needed a game like this,” Pinyan said. “We finished the drives on offense and we stayed hungry on defense.”
Carson went 4-1 against Rowan opponents this season.