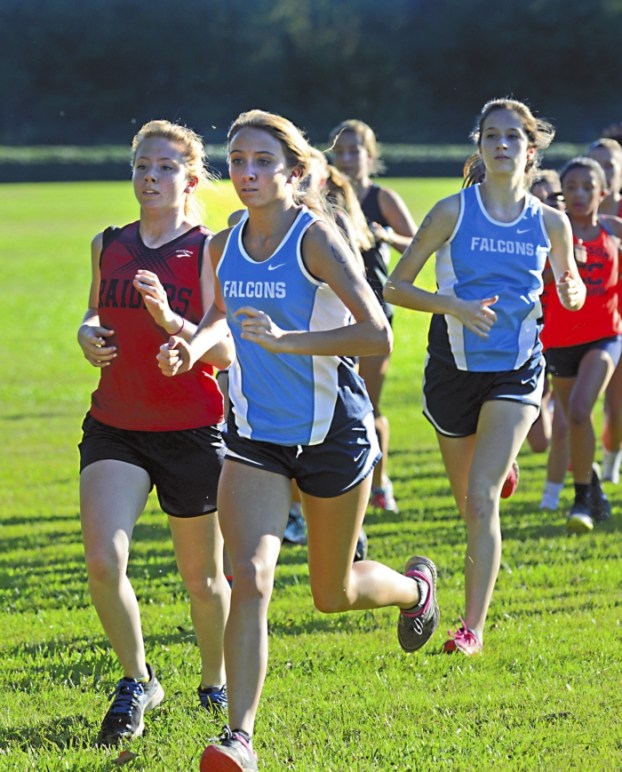 At the start fo the girls Rowan County Cross Country Meet West's Josie Heglar, in the center of the photo, went on to win the county championship. photo by Wayne Hinshaw, for the Salisbury Post

SALISBURY — East Rowan junior Faith Faller ran a personal best in the Rowan County Cross Country Championship at Dan Nicholas Park.
It still wasn’t enough. West Rowan senior Josie Heglar repeated as county champion with a clocking of 20:34. Flying down the stretch like she was running the 100, Heglar finished nearly 7 seconds ahead of Faller.
Faller won the pre-county meet, grabbed the lead early in Wednesday evening’s race and set the pace most of the way. Still, in the back of her mind, she knew Heglar was coming.
“Josie is great running the hills, I knew that, and sure enough that’s where she caught me,” Faller said. “But I can’t complain about second place when I ran a P.R. And I know I ran as hard as I could.”
Heglar and several teammates didn’t compete in August’s pre-county meet, but in the race that counted the most in the county, she performed brilliantly, just as she did last year.
“I didn’t expect Faith to be running as well as she was today,” Heglar said. “I’ve been beating her in meets this year, but she keeps getting faster every time. I just had to try my hardest to beat her again. I’m glad we practice hills so much and I’m thankful God gave me the ability to run.”
While Heglar and Faller were battling for first place, Carson was easily repeating as team champion. The Cougars placed five runners — all sophomores — in the top eight for a team score of 28. Carson also won the title in 2014 when its current sophomores were freshmen.
“We ran like I expected us to run,” Carson coach Les-Lee Peeler said. “Not that there isn’t room for improvement. This is still a very young team.”
Carson faces stiffer competition in its conference than in the county, but Peeler is optimistic the Cougars can challenge Northwest Cabarrus and Cox Mill for honors in the upcoming South Piedmont Conference Meet.
“It’ll be tough, but if we run like we did today, we’ve got a chance,” Peeler said.
Taylor Wiggins, a tiny basketball buzz-saw who didn’t compete in cross country last year, continues to be a remarkable story. She took third place in 20:50 to pace the Cougars. Jesse Nichols, always near the top, finished fourth. Summer Blais, Hannah Venable and Olivia Gabriel, another basketball whiz, placed sixth, seventh and eighth, respectively.
Senior Faith Blume finished fifth and helped East (50) beat out West (70) for second place.
The top 12 finishers achieved all-county status and received medals.
Salisbury’s Ellen Simons was ninth and paced Salisbury (100) to a fourth-place finish. Micah Helms was 10th to lead fifth-place South Rowan (132). East’s Anna Louise Alexander was 11th. Salisbury’s Mary Kaufmann was 12th.