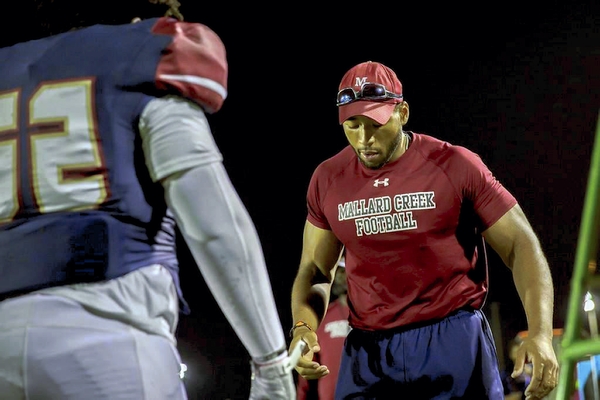 Vinson Smith while battling his weight issues in 2007. Submitted photo.

Vinson Smith was a high school football player at A.L. Brown High School in Kannapolis, playing all four years. He is now the strength and conditioning coach for Mallard Creek High School football, currently ranked eighth in the nation. But Smith has a much bigger story to tell.

Always a big kid, Smith’s weight ballooned to 500 pounds following the death of his dad and his graduation in 2006. “I was the fat and funny guy with quick comebacks who could lighten the mood. I could make fun of myself real quick. But I was an emotional eater.” Smith was a senior at A.L. Brown when he lost his father to liver cancer in 2006.

Smith knew all the tricks about how to eat large amounts of food. Once he ate 100 chicken wings at one setting. “The waitress brought the whole amount and I drank Diet Coke without ice as I ate them. The Diet Coke made me belch and every time I did, I could eat more. My buddies thought it was cool to know someone who could eat that much.” Smith once ate four Big Macs at one setting.

The excessive eating caused Smith to wear clothes that he could only buy in a few places. He eventually wore an 8X shirt, 64-inch waist jeans and size 18 shoes. “Even my feet were fat. I could only stand for 45 minutes before my back would really hurt.” he said.

While living at home and with his weight out of control, Smith knew that he needed to make a change, saying, “Nobody was going to hire a 500-pound person. They would think I was lazy. So I decided to get my weight under control in hopes of a good job and eventually having a family.”

Coming from a family that included the likes of Haskell Stanback, one of the best football players ever to play in Kannapolis, Smith was proud that his dad and uncle had both been college football players as well. His family was also one of strong faith, an influence that would play a huge part in Smith’s approach to righting his life. Smith said, “My dad started three churches over the years. I knew that God would give me the opportunity to battle the weight.”

And battle it, Smith did. He started by walking “stop sign to stop sign” and reading the labels on the foods that he chose to eat. Smith decided to join a gym. “Going into a fitness center while you are morbidly obese is tough. You think that everyone is looking at you, saying that this guy really needs to be in here. But my goal was much bigger than any insecurity. My passion was to be the best and I had to lose the weight. My passion gets me up in the morning,” he said.

Smith continued, “There ain’t nobody in the gym worried about you. They all have their own pain and struggle. That is something that we all share. It could be that they need to lose weight or even gain some. Maybe they have a competition of some sort coming up.”

Using mostly a proper diet and a mix of cardio and strength training, Smith eventually set a goal of reaching 225 pounds. Just 13 pounds short of that goal, Smith now works as a personal trainer. He enjoys helping those who struggle with their weight just as he has, with many of them facing the same issues. He said, “I quit many times. My zeal has to outweigh the insecurities. I had to live to lose the weight.”

Describing himself as forever the 500-pound guy inside, Smith tells his clients, “My own weight struggle is for you. The results are for me.” Applying his own experiences and successes to his work as a personal trainer, Smith starts his overweight clients off by asking them to keep a food journal. The results of that journal allow him to evaluate their mindset. Smith said, “If they aren’t willing to record their food intake, then I can’t work with them. Of course, I can tell when they are not truthful. It’s time for them to put the foot on the gas and go hard. Most have never tried before to lose weight. I communicate with each client daily.” Smith uses the same mix of cardio, strength training and diet improvement for his clients that proved to be successful for him.

The coaching staff at Mallard Creek High School has been role models for Smith. He said, “They make me want to be a better man. We have great parents and kids too.” Smith has worked with current professional football players DJ Humphries and Devin Flowers, and five Division I standouts during his eight years as strength coach.

Just last week, Smith’s sister Roshunda passed away. With his father and sister now both gone, he looks forward to spending more time with his mom. Smith credits Janet Smith as being the strongest woman in his life, his source of faith, courage and inspiration. He plans to take her overseas soon.

As his weight loss goal nears, Smith can still enjoy certain foods on occasion. “There is nothing like a good burger, especially one made with fresh ingredients. I love a good salad too, anything that comes from the local farmer.”

Vanity Sports and Fitness is Vinson Smith’s own venture. He has a website coming soon, but you can contact him at vanityfitnc@gmail.com or on Facebook. He continues work on what he hopes will be an exercise science degree. For now, Smith is just glad to be enjoying life and remains very humble and thankful for having lost the weight. He said, “I will never want to take my weight issues for granted again.”