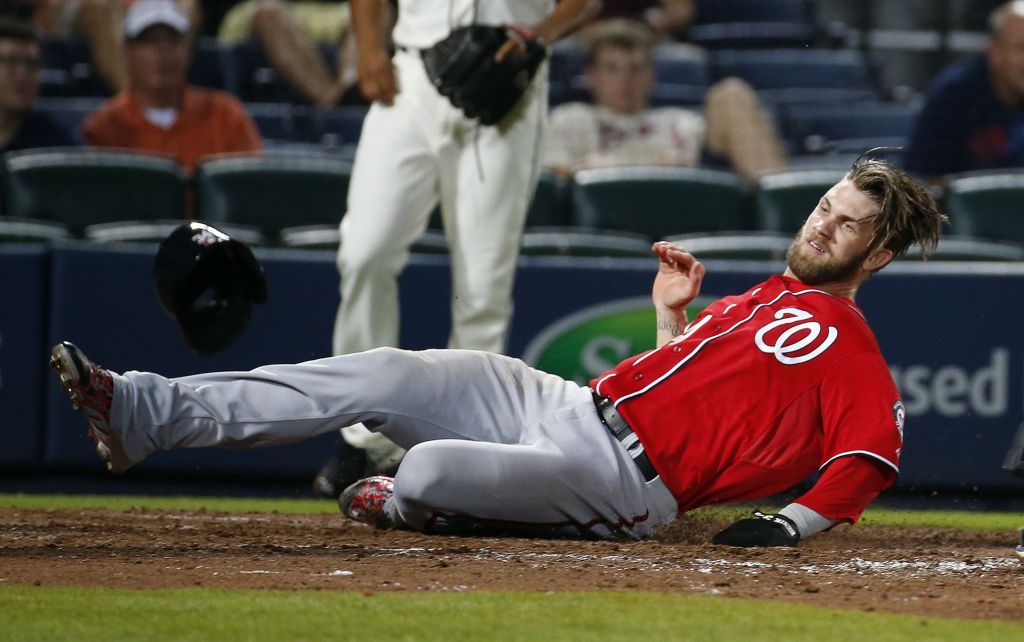 ATLANTA (AP) — A long rain delay and extra innings tested the Washington Nationals’ mental and physical strength.
Matt Williams said he was impressed his NL East-leading team finally found a way to win.
Wilson Ramos’ bases-loaded single sparked Washington’s three-run 11th inning, and the Nationals beat the Atlanta Braves 4-1 on Saturday night.
The start of the game was delayed by 3 hours, 41 minutes, and the final out wasn’t recorded until Sunday at 2:29 a.m.
“Considering all that happened today and the way we had to fight through the last couple of days, it was pretty good for us,” Williams said. “We fought all the way.”
It was the Braves’ ninth loss in 10 games. The Nationals increased their lead in the division over Atlanta to 41/2 games.
Anthony Rendon and Adam LaRoche led off the 11th with singles against David Carpenter (4-2). After left fielder Justin Upton made a leaping catch of Ian Desmond’s liner, James Russell walked Bryce Harper to load the bases.
Ramos then drove in Rendon with a single up the middle off Anthony Vavaro, Atlanta’s third pitcher of the inning. Devin Frandsen’s double to right field drove in two runs to make it 4-1.
Ramos was initially ruled safe at home on the play, but the call was overturned following a replay challenge by Braves manager Fredi Gonzalez.
Tyler Clippard (7-2) pitched a scoreless 10th inning, and Rafael Soriano got three outs for his 26th save in 30 chances.
The Braves, who snapped an eight-game losing streak Friday night with a 7-6 win over the Nationals, were frustrated by leaving 11 runners on base. More offensive struggles wasted a strong start by Aaron Harang, who allowed one run in seven innings.
“It’s tough, especially against a team that we know we’re trying to make up ground on,” Harang said.
LaRoche’s homer in the sixth gave Washington a 1-0 lead, but the Braves tied it in the bottom half.
Washington’s Tanner Roark and Harang opened with five scoreless innings before LaRoche led off the sixth with his 16th homer.
The Braves settled for one run after loading the bases with no outs in the sixth. Tommy La Stella scored on Jason Heyward’s broken-bat fly ball to shallow center field.
Roark also lasted seven innings, allowing one run, six hits and three walks.
BOOS FOR BRYCE
Nationals outfielder Bryce Harper, booed consistently by Braves fans, might have tried to send a message back to the fans by scraping his cleat over the Atlanta “A” carved into the dirt behind the batter’s box, as if trying to scuff it. Fans responded with more boos.
SPAN THE MAN
Denard Span’s fifth-inning triple gave him a 13-game hitting streak. He has reached base in 35 consecutive games, a streak that began on June 28.
ALUMNI SOFTBALL
Newly inducted Hall of Famer Greg Maddux, and Chipper Jones were among the former Braves players who played in a legends softball game. Jones, wearing shorts and striped socks, homered in his first at-bat. Maddux settled for a double. John Rocker and Ryan Klesko were among other players to easily clear the short fence for homers.
TRAINER’S ROOM
Nationals: Right fielder Jayson Werth was scratched from the lineup as he continues to be slowed by a sore right ankle and right shoulder. He walked as a pinch-hitter in the 11th and should start on Sunday night, according to Williams. … Outfielder Steven Souza, who hurt his shoulder in a collision with the right-field wall and left Friday’s game, entered as a pinch-runner for Werth.
Braves: Shortstop Andrelton Simmons’ sprained left ankle is improving. Gonzalez said Simmons might play by Tuesday. Simmons was no longer wearing a soft cast, but had the ankle wrapped. … Right-hander Shae Simmons, on the disabled list with a right shoulder strain since July 27, said he “felt really good today” throwing in the outfield. He still hasn’t thrown off a mound.
UP NEXT
Nationals: Left-hander Gio Gonzalez will try to end a streak of four straight losses in his last five starts at Turner Field on Sunday night. He won his first two career starts in Atlanta before a long string of bad luck. Gonzalez has received one run of support in each of his last five starts in Atlanta.
Braves: Left-hander Alex Wood will look for his first win since July 20. Wood is 0-2 in his last three starts, dropping him to 7-9 with a 3.20 ERA for the season. Wood is 1-1 with a 2.25 ERA in two starts against Washington this season.