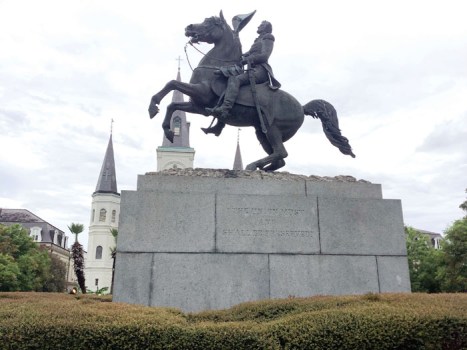 The famous statue of Andrew Jackson that adorns the beautiful park named after him. David Freeze photo 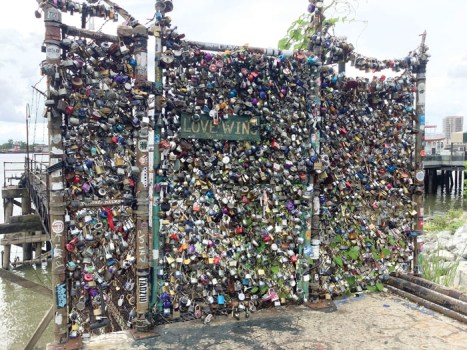 Hundreds of locks fill this gate to an unused pier. People stopped to take photos in front of the collection often. David Freeze photo 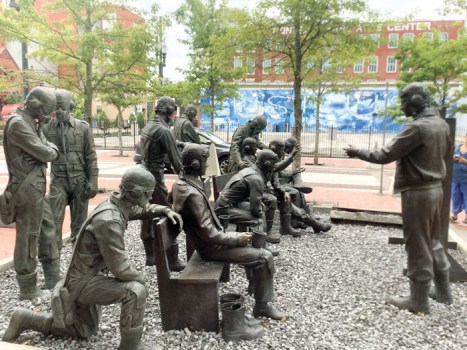 Moving statues of a fighter group preparing for another mission. Those with full oxygen masks on are gray, meaning that they were recently killed. David Freeze photo. 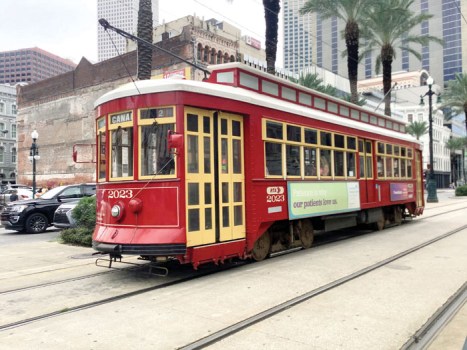 Trolleys are a regular mode of transportation in New Orleans since 1835. David Freeze photo 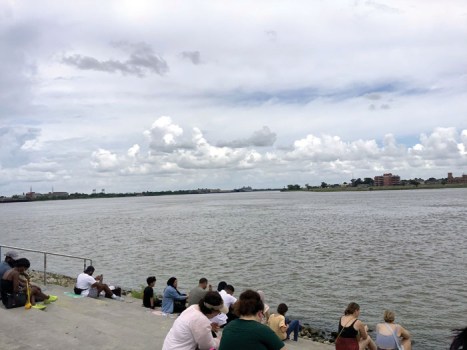 A view of the Mississippi looking south later in the day. David Freeze photo 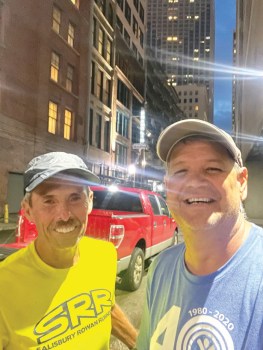 Freeze with David Bourg who brought him into the New Orleans on Saturday night. 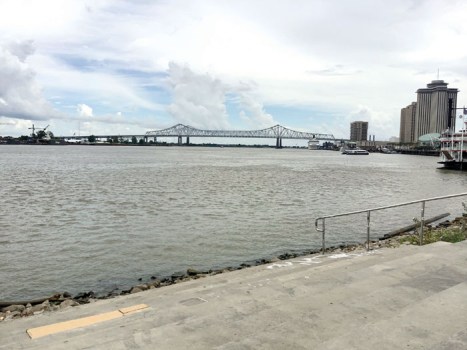 Editor’s note: David Freeze has cycled along the Mississippi River from Dubuque, Iowa, to New Orleans. Contact him at david.freeze@ctc.net.

Today was about seeing New Orleans and I planned to get as much done as possible. First up was the World War II Museum, followed by some time at the Mississippi River and a sightseeing tour if there was time.
I walked 6 tenths of a mile to the museum with few people on the streets. Just a few folks wandering around the museum plaza anxious to get in. There were just a couple odd guys, one of them standing in the street and hollering to the cars that passed by. There were a few statues and plaques outside to see and I made use of that time to read about the museum. We got in at 9 a.m., which they do nearly every day of the year. Once inside, I paid for the ticket and Tom Hanks’ movie that celebrates the museum and honors those who fought. Galleries follow all the different portions of the war from having an undersized and ill-prepared armed forces that would soon take on war machines already operating with vast power.
Historian and author Stephen Ambrose along with movie producer Stephen Spielberg got credit for starting the museum, and Hanks and many others have joined in. Those galleries were impressive to me, especially the stories in their own words from the heroes that fought and survived. Brave soldiers who didn’t survive have their stories told too. The equipment displays are real, from all the armies that were involved. A wonderful place worth seeing, worth a least a full day and maybe two, already recognized as New Orleans top attraction.
Hanks produced the movie in 4-D, meaning the screen is wide angle, the sounds are incredible and the chairs and floor shake at appropriate times.
After five hours, my first thing when outside was to find a small amount of food. A $5 large cookie and $3 bottle of water. I walked back then to Jackson Square, seen by many as the center of old New Orleans. There is a great viewing area of the working river, and I watched tugboats push barges by. A couple of military ships and a riverboat were also close by, with a small cruise liner moored in the distance.
I took an hour and a half tour of the city, the last one available for the day. New Orleans is vastly cleaned up and much brighter than when I was here last. I found out that the city is in fact an island, visitors and residents unable to leave except by plane, boat or bridge. Insurance is often more than the house payment, and celebrities like John Goodman and Sandra Bullock have their primary residences here. Beyoncé just bought a huge old church that is a block long and is making it a residence too.
The trolley system has operated since 1835 and one car still operates that is almost 90 years old. The Mississippi at the viewing spot is about a half mile wide and 200 feet deep. The street performers that I remembered from my last visit no longer perform in Jackson Square, which is now a nice park. But some of those performers entertain at other locations near the square.
I walked a lot, nearly all day and really enjoyed the city. I did get a standard bag of three beignets, French donuts. Very popular were the places selling them and one stays open 24 hours a day, 7 days a week. I did order mine without powdered sugar and it took the girl a long time to get them that way. The line never stops at Cafe Du Monde. There is a fantastic downtown market that has all kinds of gifts and probably at least a hundred open air vendors.
Typically, I usually listen for scams and found a few, but I think that is part of the game. One guy who set up his truck near the beignet place, where water and soft drinks were really high, had a sign that said bottled water for $2. I asked for two and he said, “$5.” I told him I wanted the $2 water and he still pulled them out of another cooler and said, “You get it for a discount!”
I got a huge slice of pizza twice at the same place and got a few things for my granddaughter. Finally, after one more visit to the river with a street performer playing great organ music, and I have called it a day.
My train, the Crescent, leaves at 9 a.m., but riderless bike and I will walk there early. My longest train ride was to New York City close to 20 years ago, and I am really excited about this one. It should be about 752 miles and will last about 20 hours.
One more day of traveling and then this journey will be ending. There is some sadness when they all end, but with that sadness comes an opportunity for planning the next one.
I hope you will join me tomorrow when I write from the Amtrak Crescent while seeing yet another part of America. See you back here then and as always, thanks for your prayers!