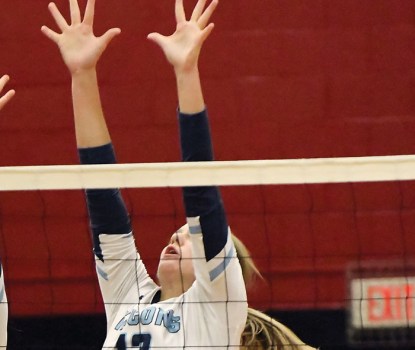 Emma Clarke, a 6-foot junior, has been involved with softball camps but should make an impact as soon as she turns her focus to the volleyball court. File photo by Wayne Hinshaw, for the Salisbury Post 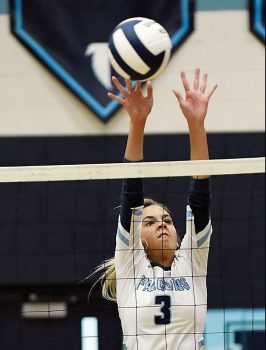 Ashlee Ennis had 195 kills as an undersized hitter last season. She also led the Falcons in aces and was second in digs. File photo by Wayne Hinshaw, for the Salisbury Post

Third in a series of reports on local volleyball teams …

MOUNT ULLA — West Rowan is on a roll in volleyball.

Not much of  drop-off is expected this season, even without star Kelcie Love.

West head coach Jan Dowling kept it going after Tori Hester graduated and after KK Dowling graduated. Love’s 304 kills obviously will be missed, but the Falcons will figure out how to replace her.

Since the program got over the hump in 2017, West has combined a strong work ethic and a high skill level with a few outrageous athletes. Junior Emma Clarke should be about as outrageous as it gets this season. The 6-footer is going to get her blocks and kills. There’s not much anyone can do about it.

“We don’t have Emma in the preseason because she’s going to softball camps, and we get that she’s big-time in softball,” Dowling said. “We know it’s going to take a few weeks to get her back in volleyball mode, but she’s such an athlete that she’s still a difference-maker.”

While Clarke should be something to behold once she settles in, West has plenty of options while she finds her timing. The Falcons have a huge senior class of eight. Two of those girls — Ashlee Ennis and Brooke Kennerly — have been standouts.

Ennis is as versatile as anyone in the county and can excel at any position. She posted 195 kills as an undersized hitter last season, while leading West in aces and finishing second in digs.

She’s moved to the setter position as a senior, and that might be where she’s best. She had 39 assists in West’s 3-2 win against South Iredell on opening night.

“She’s going to be at the helm,” Dowling said. “Great all-round player and she can run whatever we need her to run.” 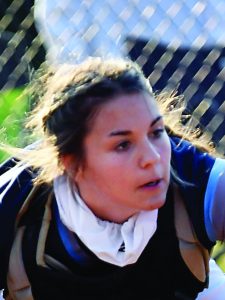 Kennerly, an Appalachian State softball commit, led the team in digs in 2021 and returns as the libero. She’s strong and tough and gets to a lot of balls.

The player most likely to make a jump as a senior is outside hitter Anna Grace Blackledge. She was part of West’s committee of hitters last season, helping out Love, Clarke and Ennis, but she’s ramped up her game in the last year.

“She’s just worked and worked, and she’s changed her level of  conditioning,” Dowling said. “She’s solid as they come. She’s strong and now he can just go and go and go.”

Blackledge, who totaled 134 kills as a junior, careered with 19 on opening night.

Veterans Maia Gaeta (139 kills in 2021) and Madelyn VonCanon (98 kills) contributed frequently last season and will get more hitting opportunities. D’Ajua (Dede) Cuthberson is a senior hitter, who gives the Falcons some basketball explosiveness.

Joining Kennerly on the back row defense will be seniors Karsen Simpson and Kristin Hammonds and juniors Brinley Batts, Ava Gusler and Abigail Evenden.

Hammonds, who is making a volleyball comeback, is a surprising hitter, but at 5-foot-5, she fits best on the back row.

West has welcomed Rocky River transfer Skyy Ruben to the program. The sophomore has some size (5-foot-10) and some bounce.

“She’s got some things to work on, but she can be a big part of our future,” Dowling said.

West has 14 girls on the varsity, and Dowling likes to play a lot of people. They’ll all get chances in the non-conference portion of the season.

The chief challengers to West in the South Piedmont Conference are likely to be Lake Norman Charter and county rivals East Rowan, Carson and South Rowan.

West, which has won 10 playoff matches in the past five years, hasn’t lost to a county opponent since Oct. 9, 2018, at Carson. The Falcons’ county winning streak stands at 18 matches.

“We’ve got some depth,” Dowling said. “Now we have to figure out who fits best together.”

Playoffs: Lost to Fred T. Foard in 4th round