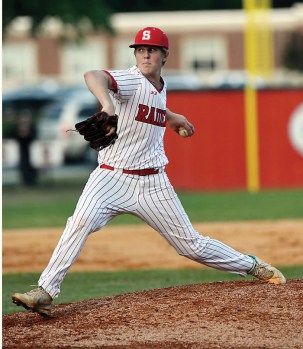 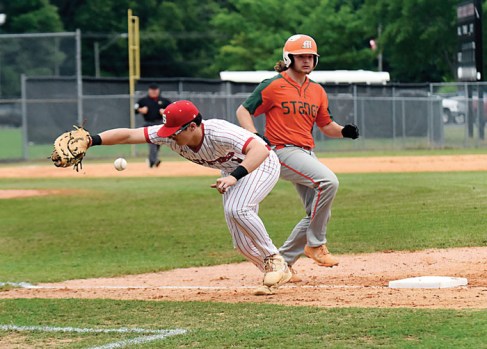 South's JD James 11 going at a wild throw as East Lincoln's Gavin Houser 8 was safe at first base. photo by Wayne Hinshaw, for the Salisbury Post 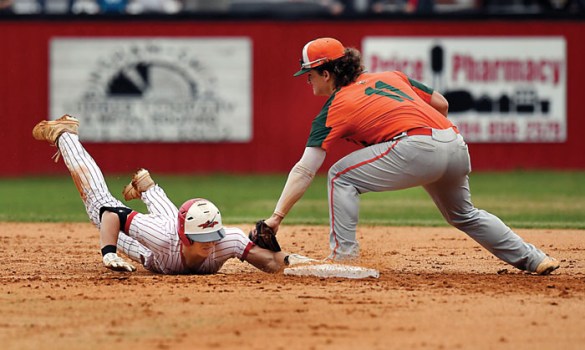 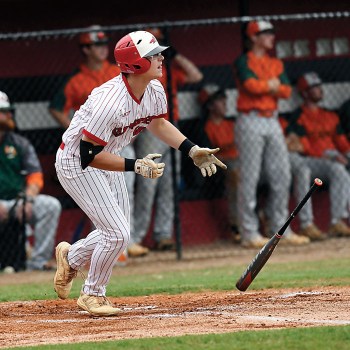 South's JD James 11 getting a double. ., photo by Wayne Hinshaw, for the Salisbury Post

LANDIS —  After a dozen Haiden Leffew strikeouts and a string of clutch doubles, South Rowan’s surging baseball team holds a 1-0 lead in the 3A West Championship Series.

The first contest with 11th-seeded East Lincoln was no contest at all. Top-seeded South scored four runs in the first inning on Wednesday and went on to rout the visitors 11-1 via the 10-run rule.

The best-of-three series continues Thursday night in Denver. East Lincoln is 8-2 at home. South is 7-1 on the road.

East Lincoln (20-7) got a solo homer from N.C. State-bound catcher Graham Smiley to start the second inning, but that was all the damage the normally hard-hitting Mustangs managed against Leffew, a polished junior lefty who has committed to Wake Forest. Leffew allowed only two hits and two walks against a powerful lineup that has slugged 35 homers and includes three major Division I recruits. East Lincoln has a lot of lefty hitters, and it was a good matchup for Leffew.

Leffew (10-1) neared the pitch-count limit of 105 as he struck out the side in the sixth. South coach Thad Chrismon didn’t have to decide on who was going to pitch the seventh, as the Raiders (27-4) ended the game early in the bottom of the sixth.

South got the quick start it wanted with a four-run first inning against East Lincoln starter Isaac Armstrong (5-1), who lost for the first time this season.  One-out hits by Nathan Chrismon and Ty Hubbard set the table. Leffew’s two-run double to center got the Raiders rolling. JD James’ two-out, two-run double made it 4-0.

With this game slipping away quickly, East Lincoln got Armstrong out after two innings and 50 pitches. He’ll be eligible to pitch again on Saturday if the series goes three games.

Smiley’s solo blast, his seventh of the season, provided the Mustangs  with temporary hope, but South got that run right back in the bottom of the second.

South made it 8-1 with a three-run third. Kane Kepley’s two-out, two-run double was the big blow.

It was 9-1 heading to the sixth, and James’ two-run single sent fans to the exits.

South pounded out 14 hits, with Hubbard going 3-for-3 with three runs scored. James had three hits and knocked in four.

NOTES: Leffew has won his last six decisions. … Carson Crainshaw (8-0) is the probable starter for South Rowan tonight against East Lincoln sophomore Carson Dahle (5-2). … East Lincoln slugger Garrett Michel (Virginia Tech signee, 16 homers) hasn’t been pitched to much lately and walked four straight times in the fourth round, but Leffew got him out twice.