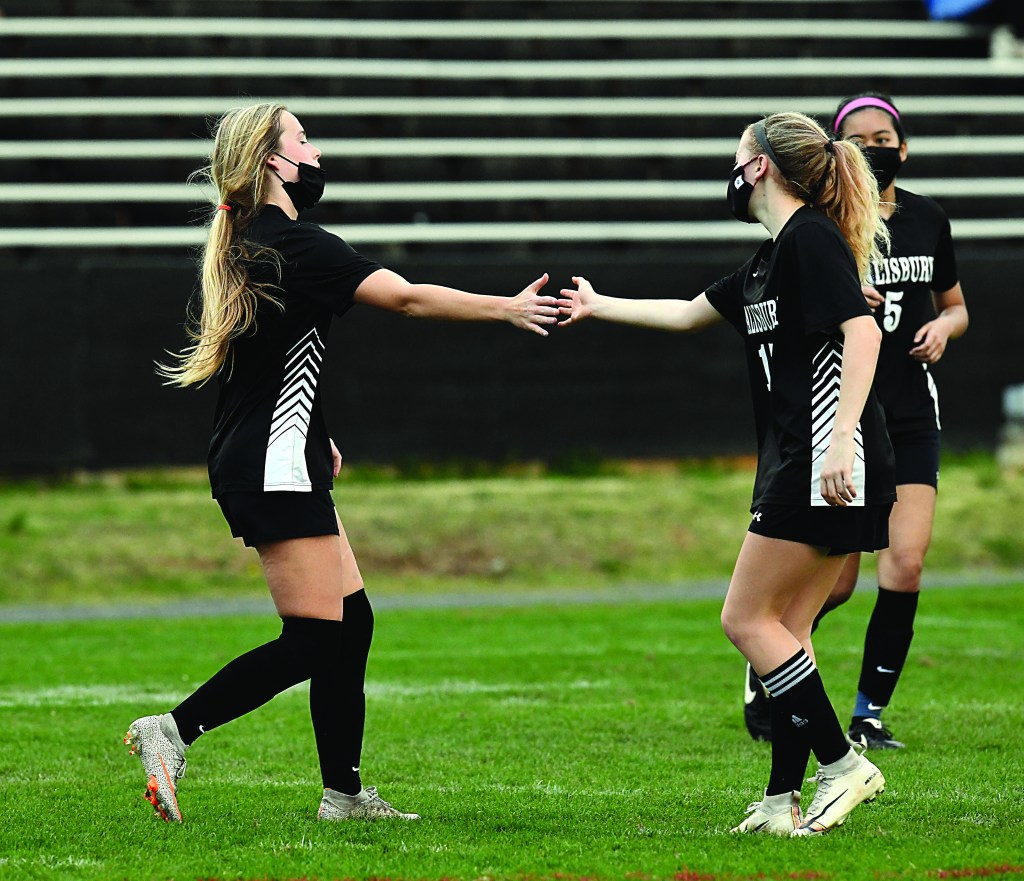 Salisbury's Sutton Webb 8 on the left gets a hand from Izzy Banish 15 after scoring a goal. photo by Wayne Hinshaw, for the Salisbury Post

The Georgia recruit has eight goals in the Hornets’  first two games and 90 for her career.

Freshman Angelee Garcia recorded her first career goals, while Kendall Colwell scored for the second contest in a row.

Sophomore Izzy Banish had four assists for the Hornets.

“Right now, we are just trying to sort things out,” Salisbury coach Matt Parrish said. “I’m trying to implement a new system, all while acclimating almost every player to a new position. It is going to take time (and patience) to learn to play without graduated players and with each other. I am proud of all of them for their patience and perseverance these first three weeks. To earn two wins is just a bonus.”

Next up for the Hornets is another road match Monday versus Concord. The Spiders are led by former SHS assistant coach Taylor Strode.

The match  scheduled for Thursday with Ledford has been moved to April 12.

Lyerly led the Spartans in the Dorado Beach Collegiate tournament on Feb. 27 to March 1, posting a 14-under-par 202 performance to capture the tournament title. Lyerly shot 66-68-68 and finished 14-under to win by one stroke.

Livingstone golfers finished 1-2-3-4. Ronald Otile led the way with rounds of 69 and 70 and won by seven strokes.

Mooresville won 8-3 against Carson on Wednesday.

Ellie Goins homered for the Blue Devils. Morgan Smith was the winning pitcher.

Brooklyn Stewart had two  hits for the Cougars.

Brooke Kennerly had the walk-off hit.

Emma Clarke homered for the Falcons on her first at-bat of the season. Arabella Shulenburger had two hits.

Ashley Yang, Ella Trainor and Caroline Cozart had hits for the Hornets.

Addie Hendrix struck out 11 and led Davie to a 3-0 win against East Surry.

Hickory Ridge’s Sherree Gidney is the daughter of former Livingstone star Rodney Gidney. She made all-conference.

Bryanna Troutman (Salisbury) had 24 points, eight rebounds and three blocks, as top-seeded  Wingate got by No. 8 seed  Tusculum 57-53 in first round of the SAC tournament on Wednesday.

Abigail Wilson (West Rowan) scored nine points in UNC Asheville’s 68-59 win over NC A&T in the Big South Tournament. Next for the Bulldogs is USC Upstate on Thursday.

Carleigh Perry (Carson) averaged 6.0 points and 6.5 rebounds as a freshman for Guilford.

Colbie Perry (Carson) played in 17 games for Converse and made 13 3-pointers.

Jacob Efird went 4-for-4 in Carson’s 19-0 win against North Rowan on Wednesday.

Mikey Beasley was the winning pitcher.

Padgett allowed one hit and one walk and struck out 12.

Cobb Hightower hit a home run for the Mustangs.

Hayden Simmerson had  three hits for the Cougars, while Emory Taylor, Aaron Coe and Jordan King had two each.

Salisbury lost a 16-12 slugfest with Gray Stone on Tuesday.

The Knights had a 10-run fourth inning.

Watauga  outscored Davie 17-15 in a wild game on Wednesday.

Coy James had three hits, including a homer, to lead the War Eagles.

Seamon won low net score, while John Mitchell was the Super Senior with a net of 66.84.

The seventh-seeded Catawba men are on the road at second-seeded Queens.

Kary Hales (Carson) homered in Catawba’s 7-5 loss to Queens on Tuesday in the first game of a doubleheader.

Hales and Brittany Ireland drove in two runs each.

Mackenzie Sprinkle (East Rowan) is batting .313 for Belmont Abbey. She hit her first homer of the season against Augusta.