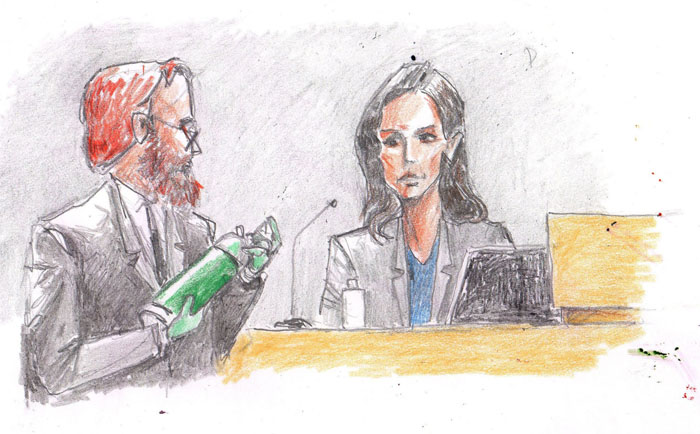 SALISBURY — Slowly turning a silver, blue and green cylinder over in his gloved hands, Assistant District Attorney Brian Taylor held an oxygen tank for each juror to see up close.

The tank was used by 72-year-old Eugene Chunn to help him breathe, but prosecutors believe it was also the weapon used by his son, Juan Chunn, to bludgeon his father to death in April of 2018.

The trial of Juan Chunn continued in Rowan County Superior Court on Thursday morning, more than two years after he was arrested and charged with first-degree murder for the slaying of his father. Eugene Chunn was found dead in the living room of his home at 816 E. Franklin St. in the early morning hours of April 19, after Juan Chunn placed a call to 911 calling for help.

Juan Chunn, 52, told authorities at the time that he’d moved into the home weeks before from Georgia, there to take care of his ailing father.

On the first day of the trial Wednesday, prosecutors utilized testimonies from several of Eugene Chunn’s neighbors and multiple law enforcement officers to build their case against Juan Chunn. On Thursday morning, the state sought to recreate the crime scene for the jury by employing dozens of photos, the testimony of detective Meredith Walker and physical evidence, including the alleged murder weapon.

Walker was responsible for processing the crime scene in the hours after Eugene Chunn was found dead. She walked the jury through the scene with prompting from Taylor and with aid from photos, which illustrated what the outside and inside of the home looked like that night.

The graphic pictures showed Eugene Chunn’s body where it was discovered on his couch, his discolored and disfigured head slumped on his left shoulder and his chest covered in blood.

The oxygen tank, smeared with blood and stationed upright in the middle of the living room next to the victim’s bedroom slippers, was shown from several angles. Blood splatter on the walls, living room floor and on the floor of an adjacent bedroom could be seen in the photos as well.

Walker noted that Eugene Chunn’s teeth were protruding from his mouth. The gold necklace around his neck and the gold ring on his finger, Walker said, were still in place when she processed the scene. There were no apparent injuries on the victim’s hands, Walker said.

The murder weapon wasn’t the only physical evidence Taylor displayed to jurors on Thursday.

With Walker’s assistance, Taylor unraveled in the middle of the courtroom floor the blanket that was covering Eugene Chunn’s body. Additionally, Taylor unpackaged from an evidence bag the green pillow that was on the couch next to the victim, with blood on the downturned side. Walker said the pillow must’ve been turned over after the murder occurred because of the blood’s location. As he had done with the oxygen tank, Taylor walked the pillow around to show each juror.

Other photos of the crime scene showed the den, two bedrooms and the kitchen, where a chair was wedged under the back door handle. The kitchen door and the door to the living room, Walker testified, were the only two entrances to the residence. Although the chair was blocking the kitchen door, Walker said there were no signs of forced entry anywhere in the home.

Walker testified there were neither narcotics nor money seized from the house that night.

Under cross examination by Juan Chunn’s defense attorney, John Basinger, Walker testified she had not seen any visible signs of blood on Juan Chunn’s shoes or clothes that night.

By the time Walker’s time on the stand ended, prosecutors had introduced almost 160 exhibits into evidence — most of them crime scene photos.

The next witness called by prosecutors was Victoria Young, a detective with the Salisbury Police Department who specializes in crime scene investigation. Young’s presence on the stand served as proof that the chain of custody — the chronological documentation that records the sequence of custody, control, transfer, analysis, and disposition of evidence — was followed appropriately by investigators.

The third and final witness called by prosecutors on Thursday was Summer Maffett, a forensic science supervisor with the North Carolina State Crime Laboratory. Taylor tendered Maffett as an expert witness in latent fingerprints. Latent fingerprints, Maffett explained, are those that are usually hidden or invisible to the naked eye. Maffett said she was responsible for processing the oxygen tank believed to have been used to kill Eugene Chunn.

Maffett said she was able to find some “ridge detail” on the tank, but was ultimately unable to unveil any fingerprints that could be used for comparison.

With prompting from Taylor, Maffett testified latent fingerprints are oftentimes difficult to find and not difficult to remove. “Fingerprints, by their very nature, are fragile,” Maffett said.

Maffett also explained to jurors why the oxygen tank they’d been shown earlier was smeared a shade of blue instead of the bloody red seen on the tank in the crime scene photos. The blue coloration, Maffett said, was a result of a test to check for usable fingerprints.

The jury was released following Maffett’s testimony, but the court was not yet recessed for the day. With jurors out of the room, Basinger made his case to Judge Lori Hamilton that he should be permitted to introduce information that would indicate Eugene Chunn was possibly dealing drugs. Basinger said the prosecution should not be able to represent Eugene Chunn as fundamentally a “saintly” person and portray his son and alleged killer as a fundamentally bad person.

Basinger wanted to introduce information about past crimes at Eugene Chunn’s residence, including burglaries and a suspected arson that occurred in January 2017. He also asked for the ability to question Sgt. Hill, the lead investigator on the case, about the suspects he questioned.

The point of the questioning and introduction of new information, Basinger argued, would be to explore whether the Salisbury Police Department conducted a thorough and complete investigation, not to pin the murder of Eugene Chunn on someone else.

Basinger’s requests were generally denied by Hamilton, who said she understood his arguments but disagreed with the relevance to the case. Hamilton said Basinger could call witnesses to back up his claims but not going to explore it through questioning of state witnesses and the addition of specific evidence.

The trial will continue today with the prosecution calling a medical examiner to the stand.