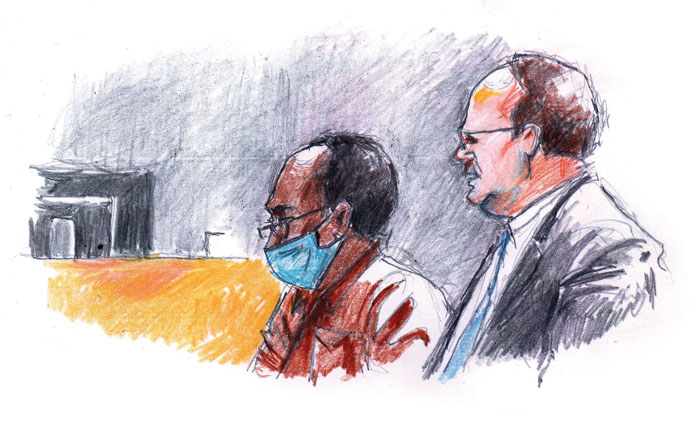 SALISBURY — During a frantic 911 call, Juan Chunn pleaded with the dispatcher to send help for his father.

“Somebody did something to my daddy,” Juan Chunn exclaimed before telling the dispatcher he believed his father, Eugene Chunn, was dead.

The brief recording, played aloud Wednesday morning for jurors at the Rowan County Courthouse, was the first piece of evidence introduced by the state in its case against Juan Chunn.

Juan Chunn, 52, is facing a charge of first-degree murder for beating his father to death. Eugene Chunn was found deceased, bloodied and slumped on the couch in his own living room in the early morning hours of April 19, 2018. Eugene Chunn lived alone at 816 E. Franklin St. before Juan Chunn had moved in several weeks before the incident.

The trial began on Wednesday with the prosecution and defense delivering their opening arguments. The prosecution also brought forward several witnesses in the trial’s first day, including several members of law enforcement who responded to the scene and three witnesses who provided a glimpse into Eugene Chunn’s final days.

In his address to the jury, Assistant District Attorney Brian Taylor framed the case as a story of “murder and betrayal” in which Eugene Chunn was bludgeoned to death by his son with the same oxygen tank he relied on for “breath to breathe.” Taylor foreshadowed the gruesome pictures and videos shown and asked jurors to pay close attention to Juan Chunn’s statements presented as evidence throughout the trial.

Attorney John Basinger, representing Juan Chunn in the trial, sought to poke holes in the prosecution’s case before they even had a chance to call witnesses. Basinger said he didn’t believe the prosecution would provide a witness who saw the murder, a confession from Juan Chunn or any forensic or physical evidence that leads jurors to a conclusion that Juan Chunn is the killer.

Basinger told the jury they would be left only with “suspicion, accusations and innuendoes” at the end of the prosecution’s case.

The first witness brought to the stand by the prosecution was Sherry Earnhardt, the dispatcher on the other end of the 911 call. Earnhardt, who recently retired as a battalion chief, could be heard attempting to pry pertinent information from a distressed Juan Chunn. Earnhardt’s time under oath was brief and her presence in the courtroom appeared to serve only as verification of the authenticity and credibility of the call.

The second witness brought forward was Kenneth Gibson, who lived a few blocks from Eugene Chunn and considered the 72-year-old to be his best friend of 20 years. The friends shared oxygen tanks occasionally since they both suffered from Chronic obstructive pulmonary disease, or COPD, Gibson said. He visited Eugene Chunn for several hours every other day and saw him alive for the last time two days before he was found dead by police officers.

Gibson saw Eugene Chunn on the day he was found deceased, when he said he was brought to the scene of the crime by Juan Chunn. Gibson’s voice was heard briefly on the 911 call as well. Assistant District Attorney Marsha Goodenow, the other half of the prosecution team, asked Gibson to relay his account of the day in question.

When Goodenow asked Gibson if he’d talked to Eugene Chunn about his son staying with him, Gibson testified that Eugene Chunn thought Juan Chunn had stolen several hundred dollars from him and was “on drugs.”

Gibson also told his version of the days leading up to Eugene Chunn’s death. Gibson said he visited his friend on April 17. On that day, there were at least two other men at the house, according to Gibson’s account. They included Earnest Goode, commonly known as “Ratman” and Thurman Cowan, known as “TC.” Goode was in the midst of caulking and painting Eugene Chunn’s front porch, Gibson said.

Goode was the next witness called by the prosecution and delivered an account largely mirroring Gibson’s. Goode said he spent time at Eugene Chunn’s house on April 17, but no one answered the door when he came back to do more painting on April 18. Goode said he assumed Eugene Chunn had gone to the doctor and asked Cowan to reach out to him before eventually learning of Eugene Chunn’s death the following morning — on April 19. 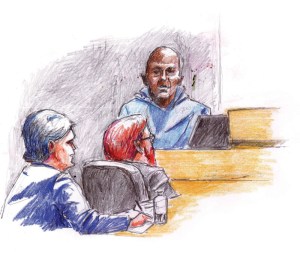 Witness Kenneth Gibson testifies during court on Wednesday. Gibson is being questioned by Assistant District Attorney Marsha Goodenow, seated next to fellow prosecutor Brian Taylor. Artwork by Mark Brincefield, for the Salisbury Post.

Cowan followed Goode on the stand. Cowan said he met Eugene Chunn 20 years ago. The two men were so close, Cowan said, that Eugene Chunn lived with him for more than a year while his house was being repaired after it caught on fire.

Cowan said he called Juan Chunn on April 18 in search of Eugene. Cowan said Juan Chunn told him he wasn’t at his father’s home and that he’d relay the message to his father when he got back.

The next two witnesses were former Salisbury Police Department officers who responded to the East Franklin Street home around 1 a.m. that morning.

Officer Patrick Lavender testified he was responsible for clearing each room in the house upon arrival. While Lavender said he didn’t find any people in the home, he noted that there were no signs of struggle in any of the rooms, but the back door to the home had a chair wedged under its handle. Lavender said he saw a bloodied Eugene Chunn initially with a sheet covering his face and noticed blood both on an upright oxygen tank near Eugene Chunn’s feet and on the wall. The splatter on the wall, Lavender said, appeared dry.

Officer Joe Wilson was next to take the stand. His testimony was accompanied by roughly 30 minutes of body camera footage captured during his response to the 911 call. In the footage, shown to the jury on a large screen, Juan Chunn was seen waiting for officers on the front porch of his father’s home.

Once Wilson and Lavender secured the scene, the video depicted an ensuing conversation between Wilson and Juan Chunn. During the conversation, Juan Chunn told Wilson he moved from Georgia to Salisbury several weeks before the incident to “help my father.”

Juan Chunn was arrested in Georgia in August of 2018, months after being indicted for first-degree murder. He was extradited back to Rowan County and booked into the Rowan County Detention Center on a $1 million bond.

In the body camera footage, Juan Chunn told Wilson he cooked dinner for his father on the night of April 17, left the residence and came back to check on Eugene Chunn the next morning. Juan Chunn said he walked by his father’s covered body in the living room at that time, but assumed he was sleeping. When he returned later, Juan Chunn said he pulled back the sheet, saw his father’s bloodied face and ran from the house to find help and call 911.

In the video, Juan Chunn attempted multiple times to retrieve belongings from the home and from his father’s white Chrysler car. Juan Chunn said he’d been the last person to drive the Chrysler.

During his cross examination of Wilson, Basinger asked if he’d noticed any blood on Juan Chunn’s clothing. Wilson said he had not, nor had he noticed any in the Chrysler.

The final witness called during the trial’s opening day was detective Meredith Walker, who was responsible for processing the crime scene. In conjunction with her testimony, prosecutors submitted dozens of pictures taken of the outside of the home and of the Chrysler that night. The individual photos were passed around and examined by the jurors.

Walker’s testimony was put on hold as court recessed at the end of the day, but additional crime scene pictures of the inside of the home are likely to be introduced when the trial continues today.