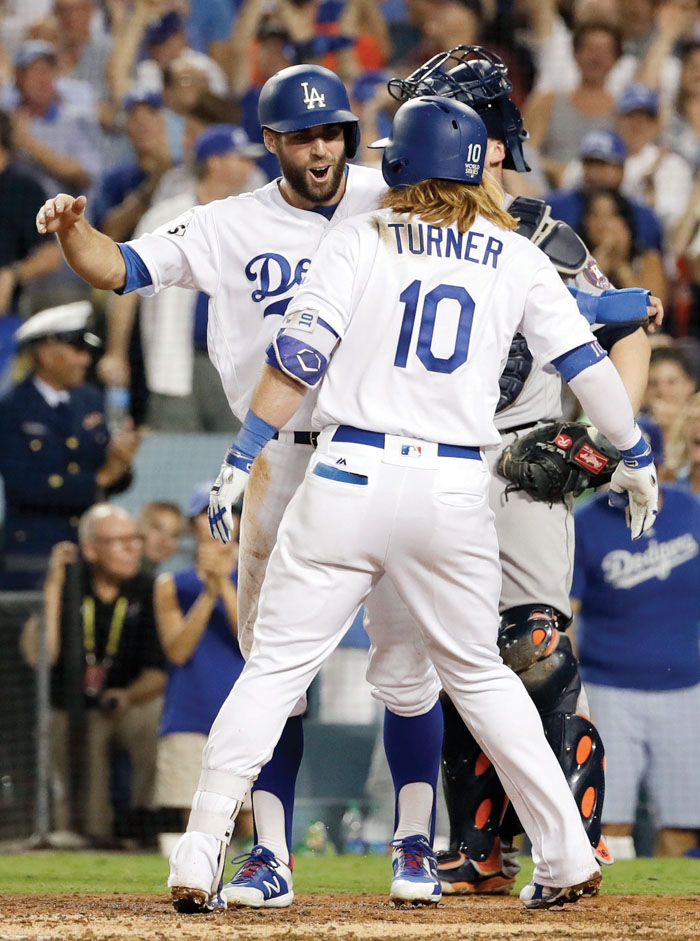 LOS ANGELES (AP) — Chris Taylor hit three homers and drove in six runs as the Los Angeles Dodgers broke loose at the plate to beat Atlanta 11-2 on Thursday night, cutting the Braves’ lead in the NL Championship Series to 3-2.

AJ Pollock had two home runs and four RBIs for the Dodgers, who have won seven straight postseason elimination games dating to last season. They also trailed 0-2 and 1-3 against Atlanta in the NLCS last year before rallying to win three straight games at a neutral site in Arlington, Texas.

Game 6 is Saturday back in Atlanta, where the Braves get two more chances to earn their first trip to the World Series since 1999.

After mustering just four hits in a 9-2 loss in Game 4 that pushed them to the brink of elimination, the desperate Dodgers rapped out eight hits by the third inning off Max Fried. They finished with 17, a club record for a postseason game.

The Dodgers got to Fried with four consecutive hits in the second. Pollock hit a tying homer and Taylor drove the first pitch he saw to left field, putting the Dodgers in front for good, 3-2.

Starting at third base in place of injured Justin Turner, Taylor became the second Dodgers player with a three-homer game in the postseason. Kiké Hernández also did it in Game 5 of the 2017 NLCS against the Chicago Cubs.

Taylor had an RBI single in the third to make it 4-2. He went deep in the fifth, sending an 0-2 pitch from Chris Martin to center field and extending the lead to 6-2.

Taylor homered again in the seventh, taking Dylan Lee out to left-center with two outs. The versatile veteran had an opportunity to match the major league mark of four home runs in game, but struck out swinging to end the eighth.

Albert Pujols wasn’t just hugging, he was hitting, too.

The 41-year-old slugger got on base three times, including a walk, and scored twice on Taylor’s homers. He notched two singles for his third and fourth hits of the postseason in his second start. He had two hits in the NL Division Series against San Francisco.

Pujols has taken to greeting his much younger teammates with bear hugs in the dugout after home runs, and they kept him busy.
Los Angeles got a clutch performance from its bullpen after opener Joe Kelly allowed a two-run homer to Freddie Freeman in the first and soon exited after 28 pitches with tightness in his right biceps.

Atlanta’s Eddie Rosario, who homered twice in his second four-hit game of the NLCS in Game 4, went 2 for 4 with a strikeout.

Pitching in his hometown, Fried gave up five runs and eight hits in 4 2/3 innings. The left-hander struck out three and walked two.
In the feast-or-famine nature of the Dodgers’ offense, Cody Bellinger went 3 for 4 with a strikeout and NL batting champion Trea Turner was 3 for 4 with an RBI single. But Mookie Betts and Corey Seager were a combined 2 for 10.

Braves: OF Jorge Soler was activated after being out following his positive COVID-19 test. He struck out swinging as a pinch-hitter in the eighth.

Dodgers: Turner was replaced on the NLCS roster by INF Andy Burns after straining his left hamstring while running to first in the seventh inning Wednesday. To make room on the 40-man roster, RHP Edwin Uceta was designated for assignment.

RHP Ian Anderson goes for the Braves in Game 6. RHP Max Scherzer starts for the Dodgers.