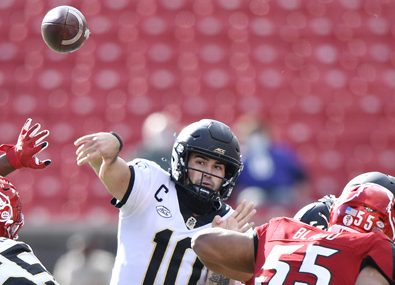 Coach Dave Clawson had talked earlier this week about wanting to see better offensive execution after an “uneven” performance in the season-opening win against Old Dominion. He largely got what he was looking for Saturday, as the Demon Deacons ran for 161 yards and had 413 total yards while dipping into their depth chart against the Championship Subdivision opponent.

“When you play these games and you have a physical advantage, you want to be efficient and you want to make explosive plays,” Clawson said. “It’s really hard to find any fault with what we did on offense other than when you put the 2s and the 3s in, you don’t want it to drop off as much as it did.”

Jaquarii Roberson had four catches for 97 yards for the Demon Deacons (2-0), including when he ran past the defense for Hartman’s deep ball for a 64-yard score on the first play of the second half. That marked his sixth straight game with a touchdown reception.

Christian Beal-Smith carried it nine times for 60 yards and ran for a first-half score along with Hartman and Turner — a Michigan transfer who reached the end zone for the first time with Wake Forest.

“We came out and did what we wanted to do,” Hartman said. “We ran the plays and executed. It was a pretty routine offensive affair. We didn’t really try to pull out a lot of bells and whistles and try to run our offense. I think we executed. From Week 1 to Week 2, I think it was a good say.”

Juwan Carter was 19-of-31 passing for 195 yards and two touchdowns for Norfolk State (0-2). Rayquan Smith and Anthony Williams each made one catch — both for touchdowns.

Norfolk State scored its second-most points against an FBS team — in its first game against an Atlantic Coast Conference opponent. The Mid-Eastern Athletic Conference program is 0-15 against Bowl Subdivision teams.

The Spartans didn’t play last season amid the COVID-19 pandemic and have gotten off to a rough start against a pair of FBS opponents, losing 49-10 at Toledo followed by this one.

The Demon Deacons have started with two lopsided wins and have now won 16 straight games against FCS opponents dating to 2000 and turns its attention to ACC play.

“We are where we need to be,” Clawson said. “When the schedule comes out, I think you look at it and say, ‘Hey you’ve got to get those first two.’ And now the rest of the way, it’s going to be a heavyweight fight every single week.”

The Demon Deacons host Florida State next Saturday in their league opener.

GREENVILLE, N.C. — The turnovers and penalties kept coming to put South Carolina in a 14-point hole. An aggressive defense, a stick-with-it running game and a clutch kick kept the Gamecocks from stumbling.

Damani Staley had a 63-yard interception return for a touchdown just before halftime to give the Gamecocks a needed spark after trailing 14-0 in a mistake-filled opening half. Former graduate assistant Zeb Noland also had a game-tying touchdown pass to Dakereon Joyner in the back of the end zone late in the third quarter.

It was the perfect outcome for Beamer: resilient enough for a win, with plenty of obvious deficiencies to improve.

“I just told the team in there I don’t think I’ve ever been more proud of a football team than that group right there,” Beamer said.

The Gamecocks (2-0) rode the legs of Juju McDowell — who gained 45 yards on six carries on South Carolina’s final 10-play drive — to set up White’s winner.

Tyler Snead hit on a 75-yard trick-play touchdown pass to Jsi Hatfield on the game’s first offensive snap for the Pirates (0-2), while Holton Ahlers also ran for a short touchdown for the 14-0 lead. But East Carolina struggled to generate consistent offense, with Ahlers completing 11 of 24 passes for just 77 yards and two interceptions.

The Pirates were hosting a Southeastern Conference team for the first time since South Carolina’s last visit here in 1997.

“The kids played their tails off,” ECU coach Mike Houston said. “I’m very proud of the way we competed, very proud of the physicality and intensity. They gave us a chance to win in the fourth quarter. I thought we had it. Just didn’t go our way.”

The Pirates play their first road game by visiting Marshall next Saturday.

No. 4 Oklahoma rolls past Western Carolina 76-0

Oklahoma matched its fifth-highest point total in school history. The Sooners led 62-0 after three quarters, and the fourth quarter was shortened to 12 minutes.

Rattler completed 20 of 26 passes for 243 yards before resting in the second half of Oklahoma’s 10th straight victory.

He joined Jason White as the only Sooners to pass for five touchdowns in a half.

Jadon Haselwood caught two touchdown passes and Jaden Knowles had 102 yards from scrimmage and ran for two touchdowns for the Sooners (2-0).

DAVIDSON (AP) — Coy Williams ran for 73 yards and two touchdowns to lead Davidson to a 28-26 victory over Division II-member Shaw on Saturday night.

Williams ran 20 times for 73 yards. Dylan Sparks added 70 yards rushing on 18 carries and a touchdown for Davidson (1-1). The Wildcats finished with 310 yards rushing.

Christian Peters was 19-of-31 passing for 196 yards and threw three touchdown passes to lead Shaw. Sidney Gibbs had 15 carries for 110 yards and a touchdown run.

Shaw scored a touchdown with 4:36 remaining but couldn’t convert the 2-point try.

Wells completed 31 of 40 passes for 318 yards and three touchdowns with one interception. He opened the scoring with a 10-yard run then threw touchdowns passes to Talik Keaton twice and another to Rasheen Ali as the Thundering Herd (2-0) took a 30-7 halftime lead.

The Eagles’ lone touchdown came on a 4-yard pass from Davius Richard to Mookie Collier in the second quarter. NC Central was held to 177 yards and just nine first downs.

Marshall’s 700 yards total offense came with 463 passing and another 237 rushing. The lofty total got a big boost from a 99-yard fourth-quarter touchdown drive after the Herd recovered a fumble at their own 1-yard line.

Ali, who scored four touchdowns in his freshman debut a week ago, added 45 yards on the ground.

Chris Reynolds scored two touchdowns and became Charlotte’s career passing leader in a 38-10 victory over Gardner-Webb. Reynolds was 10-of-17 passing for just 103 yards and two interceptions but he still finished the night with 5,469 career passing yards, eclipsing Matt Johnson (2013-16), who finished with 5,405.

In Buies Creek, Davis Cheek threw a pair of touchdown passes and Elon’s late defensive stop on a two-point conversion gave the Phoenix a 24-23 win over Campbell.