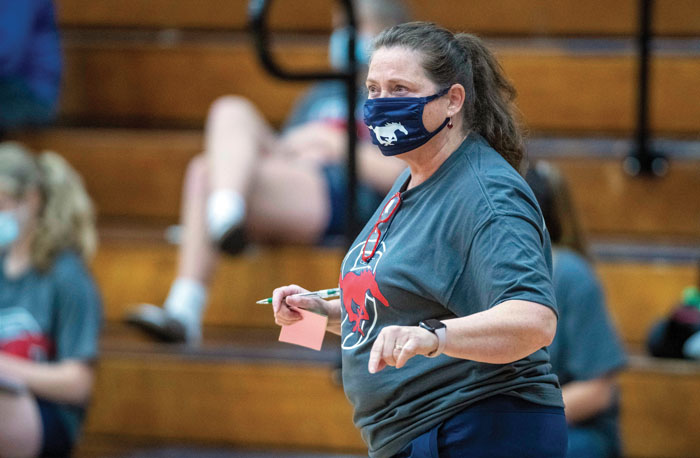 Third in a series of reports on local volleyball teams …

GRANITE QUARRY — When your best two players are juniors, it’s exciting for the future, but East Rowan head volleyball coach Sandy Lytton also hopes to win in the present.

Junior Leah Hinceman stands 6-foot-1 and is athletic. A potential beast, she should be one of the county’s most ferocious swingers, as she makes the transition from the middle to outside hitter.

“She plays for a big-time club team (Charlotte-based Carolina Union Volleyball Club) and she’s gotten better since the high school season,” Lytton said. “She’s really improved on her back-row defense. We’re hoping this is the year she puts it all together.”

Junior Riley Hill, should be as good as any libero around.

“She’s terrific already and she just keeps getting better,” Lytton said. “She makes very few mistakes. She’ll do some pretty incredible things when it comes to digs.”

How well East can fill in the gaps around those two will tell the story. East graduated three good seniors.

East made strides last season and could make some more. The new-look, eight-team 3A South Piedmont Conference should be challenging, but it offers more opportunities for conference wins than the Mustangs have seen in a long time. East has been playing in a vicious six-team league in which four different schools have been 3A state contenders.

Other seasoned players returning for the Mustangs are Anasty Faavesi, Dani Steelman and Kinsley Walker.

The 5-foot-8 Faavesi should be East’s second option as far as kills and she’ll rack up aces when she gets to the service line. She led the team in aces last season.

“She has a lot of power on her serve, but she still has amazing control of the spin that she can put on it,” Lytton said. “She’s athletic. She can jump.”

The 5-9 Steelman is a steady front-row player, while Walker is a back-row player. Walker’s contributions are going to come in the serve-receive and digs categories.

Setter is a vital position. That’s East’s least experienced area, so finding the right fit is going to be key.

Carrie Jo “CJ” Lytton, the coach’s daughter, a junior moving up from the jayvees, could be the setter. East is also taking a look at freshman setter Cameron Ostle, who has High Rock Volleyball Club experience.

Also joining the Mustangs this season is Caroline Snow, a freshman who has been at Gray Stone Day. She has a background as a setter and defensive specialist, so she’s another possibility to set.

Junior Erica Wagner will help as a hitter. It’s a junior-heavy team. Walker is the only senior.

Sophomores Jaeley Legg and Emma Schumacher could split time between the jayvee and varsity teams.

“We’re playing in a very good league, and it will be exciting to see how we stack up,” Coach Lytton said. “We’ve got power and we’ve added some control. We’re hoping to be one of the top teams. We feel like we can be.”