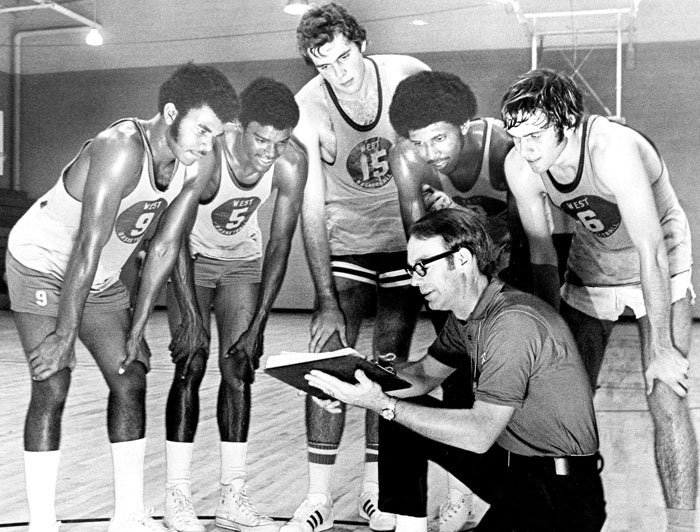 Salisbury Post file photo -- Harold Higgins coached at West Rowan starting in 1969. He was named West’s AD in the summer of 1971.

CHINA GROVE — In one of the more exciting girls championship games in the celebrated history of Catawba’s Christmas tournament, played on New Year’s Eve, Dec. 31, 1986, Central Cabarrus came back from 12 points down to take a 66-65 win against East Rowan.

A girl who made only one field goal all night — Dee Holland — made the decisive one for the Vikings. MVP Dana Boger had 23 points and eight steals.

Both teams, rivals in the South Piedmont Conference, entered that championship game undefeated. Central, which came in 9-0, won by forcing a strong East team into 36 turnovers with relentless fullcourt pressure. East, 10-0 entering the title game, was coached by Hall of Famer Jesse Watson, No. 1 on the all-time list for girls basketball victories in Rowan County. Central’s coach was a man named Harold Higgins, who rode a roller coaster through peaks and valleys during a long and resilient coaching career.

Higgins passed away on Tuesday at 86.

One of the bleakest periods for Higgins was his five seasons as the head coach of undermanned Catawba women’s teams (1979-84). Catawba was 24-88 during his tenure, but then he returned to Catawba’s Goodman Gym with the Central Cabarrus Vikings to claim one of his more memorable victories.

Higgins grew up deep in the North Carolina mountains, about 10 miles from the Tennessee border, and was quite an athlete at Mars Hill High.

Mars Hill was of the four small schools that would be consolidated into Madison County for the 1974-75 school year. Higgins stood out in basketball, football and baseball in high school, and while he led the basketball teams to conference championships, his best sport definitely was football. He went on to play quarterback at Western Carolina for three years, but he missed his senior year due to an auto accident. He earned his degree in education.

He arrived at Landis High in 1956 as assistant football coach and junior varsity basketball coach.

When South Rowan basketball head coach Jack Snyder resigned to take a college coaching job in Maryland, Higgins was elevated to that job. He coached a 12-13 season in 1967-68 (that team finished strong in a very strong league) and a rebuilding 3-15 squad in 1968-69.

When West Rowan head boys basketball coach Ted Garrett resigned to enter the business world, Higgins was hired in July 1969 to replace Garrett, while also assisting the Falcons in football and track. Higgins was named as West’s AD in the summer of 1971.

After a couple of rough basketball seasons in Mount Ulla, Higgins guided three fine clubs. The 1971-72 team was the breakthrough. With Clint Hall and Richard Ellis, the Falcons went 19-7 and won the North Piedmont Conference regular season and tournament championships.

The 1972-73 Falcons were 24-2, including 16-0 in the NPC and repeated as conference tournament champs. That team was one of the legendary ones in West history, with Paul Drechsler, Allen Simmons, Doug Wilson, Johnny Ellis and Phil Hogue doing most of the damage. West lost on opening night to A.L. Brown, then won 24 in a row before losing to Shelby in the semifinals of the Western North Car0lina High School Activities Association Tournament.

On Dec. 29, 1972, the Falcons rallied to beat East Rowan 53-48 in a thrilling Christmas tournament final. East led by six points with 4:25 left. With the score tied, Higgins had the Falcons in the UNC-inspired Four Corners and Simmons drove for the decisive bucket with 1:04 remaining.

The 1973-74 Falcons were still a solid, second-place team that went 15-9, but not long after the Falcons struggled to a losing season in 1974-75, Higgins resigned his coaching positions with West’s basketball, football and golf squads.

He wasn’t out of the game long, returning to guide Catawba’s women through some tough times.

His next stop was Central Cabarrus and that epic championship game  at Goodman Gym against East Rowan —  30 years after he had begun his coaching career in Landis.

That one-point victory made him the first coach in the history of the Christmas tourney to coach boys — and girls — teams to championships.

After retiring from the school system, Higgins devoted his athletic pursuits to golf and made four holes-in-one.

Higgins’ grandson Zach Overcash, unofficially set the record for charges taken during his career as a South Rowan basketball player. An assistant football coach and math teacher at Carson, Overcash was named Rowan County Teacher of the Year for 2018.

Higgins’ funeral was held in China Grove on Saturday.