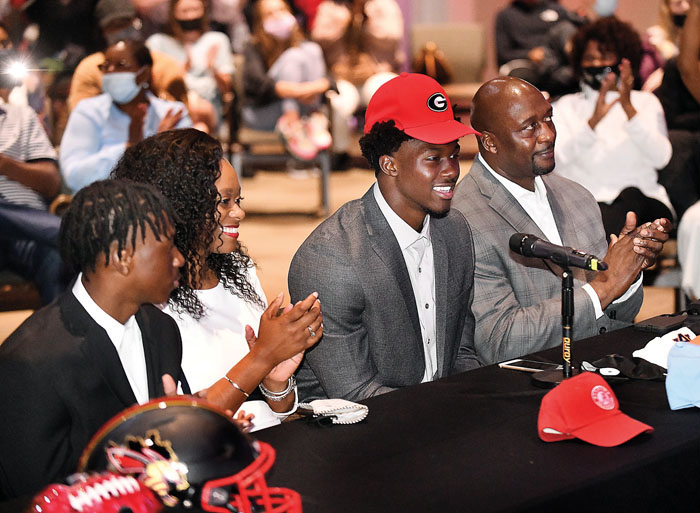 Wayne Hinshaw / for the Salisbury Post Salisbury star and national recruit Jalon Walker selects the University of Georgia and puts on the Georgia cap as his brother, Deuce, mother, LaSheka, and father, Curtis, smile and applaud with approval.

SALISBURY — Salisbury High junior linebacker Jalon Walker walked into a grocery story Monday and found out how much his life had changed since his commitment to the Georgia Bulldogs.

“A complete stranger yelled, ‘Go Dawgs!’ at me,” Walker recalled with a laugh. “I had to smile. It’s a relief that the recruiting decision is all over. I feel a whole lot better today than yesterday.”

A lot of Rowan County sports fans have become card-carrying members of Bulldog Nation since Walker announced his commitment. That’s because Walker isn’t just a superb high school football player — he’s the ultimate student-athlete, an ambassador for sports with a smile that could light up Times Square on New Year’s Eve.

The most heavily recruited athlete in Rowan County history, Walker made his college decision public on Sunday in a unique announcement ceremony at St. John’s Lutheran Church in downtown Salisbury.

The hardest part was calling the coaches that weren’t getting him an hour or so before the ceremony, but he did that as well because it was the classy thing to do.

Walker’s choice of Georgia surprised many people, but Georgia is building an unbelievable, defense-oriented recruiting class that rivals Ohio State’s as the nation’s best. Georgia has 12 commits in that class, most of them four-star recruits who were the Jalon Walkers of their respective high schools.

“It was fun to shock people with the Georgia announcement,” Walker said. “There were a lot of good reasons for it. The defensive coaches they have there, the recruits they’re signing and the commits they’re getting. Then there’s the town of Athens, where everything is just right there, and Sanford Stadium. It all fit together so well. I want to be great, and Georgia will give me the best opportunity to be great.” 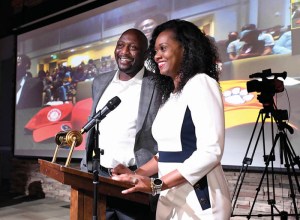 Curtis and LaSheka Walker speak during the presentation. Curtis, Jalon’s father, is head football coach at Catawba. photo by Wayne Hinshaw, for the Salisbury Post

Georgia, in other words, had a lot of pros, and no cons.

He made his decision more than a week before he made it public.

“Just sitting with my parents one night and conversing about all the pros and cons when my decision was finalized,” Walker said. “I went to my room and thought about it and I knew it had to be Georgia.”

While the burden of the recruiting fight was starting to wear even Walker down a bit at the end, he enjoyed the long process, enjoyed talking to famed coaches such as Alabama’s Nick Saban and he had the maturity to handle the pressure gracefully.

It was a recruiting struggle the likes of which Rowan County had never seen, not for national record-setting running back K.P. Parks. Not even for McDonald’s All-America basketball player Scooter Sherrill.

“He handled it all and handled it very, very well,” Salisbury head football coach Brian Hinson said. “I’m just happy for him. Obviously, he’s very blessed, but he’s taken the talent that he was given and he’s worked to make it better. Then he’s done all the right things off the field to be in position to use that talent. He’s reaping the rewards now, and he deserves it.”

The only recruiting battle locally that resembled Walker’s in scope in recent decades was the frenzied pursuit of A.L. Brown running back Nick Maddox, a two-time state player of the year and a first team USA Today and Parade All-America in 1998.

Maddox, who calmly handled his recruitment from the phone in the family kitchen, eventually picked the Florida State Seminoles over Georgia, Florida, North Carolina, Tennessee and Notre Dame.

With the rise of social media, it was a different world for Walker. There wasn’t much peace and calm. Thousands followed Walker’s recruiting journey and hung on his every tweet. 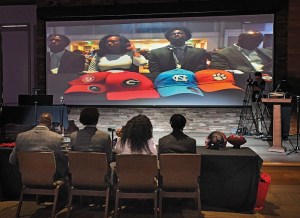 Why all the fuss?

He’s rated as the second-best prospect in North Carolina in the Class of 2022 and as the No. 4 outside linebacker in the country. With all positions considered, he’s rated as a top 40 player nationally in his class.

He’s basically an outside linebacker, and that’s what he’ll be in college, but the Hornets have used him at defensive end quite a bit. In high school, he can take away a whole side of the field and force everything back inside.

The Hornets even employed him at free safety recently to help shut down North Davidson’s passing game in the second half. His biggest asset is speed. Teams obviously run wherever he’s not, but he can still chase plays down.

In the North Davidson game, playing one-handed due to a heavy wrap to protect an injured finger, he logged an 80-yard fumble return and a 13-yard run for a first down on a faked punt.

It’s not an exaggeration to say Walker could play anywhere on defense — or offense. He proved last season that when he has two healthy hands he can catch touchdown passes.

Beyond the physical attributes, he brings all the intangibles to the field and to the locker room and to the classroom. The son of Catawba head football coach Curtis Walker, he’s been looked to as a leader since his first day on campus at Salisbury.

He was an all-conference and all-county basketball player this year despite being a non-shooter.

His rebounding and shot-blocking defied belief, at times. His rejection of a rim assault by North Davidson’s All-State player Jamarien Dalton — Walker was so high off the floor he was in the square — has become legendary. In track and field, he would have been a force sprinting and jumping last spring, but the Hornets only had one meet before COVID-19 shut down the season.

Hinson has said more than once that Walker isn’t just the best athlete in the school; he’s one of the best people and students in the school.

Walker trimmed a laundry list of schools, including nine SEC programs, down to 10 finalists back in August. He narrowed his choices to six schools in November, a who’s who of college football — Alabama, Auburn, Clemson, Georgia, North Carolina and Ohio State.

It came down to Georgia, Clemson and UNC.

“Definitely, that was the final trio,” Walker said. 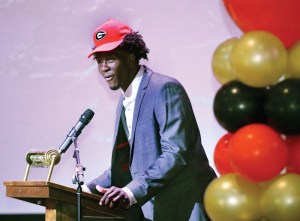 Jalon Walker addresses the audience after announcing that he will play football for the University of Georgia. photo by Wayne Hinsnaw, for the Salisbury Post

Walker always kept the Tar Heels on his short list because they were the first to offer him during the summer between his freshman and sophomore years.

The Tar Heels wanted him before he was a household name, before everyone started piling on. That meant a lot. Duke and Wake Forest offered shortly after UNC. Then it was a snowball of offers.

Walker’s ties with Clemson run deep. Clemson defensive end KJ Henry is a friend. Their fathers played together and coached together at Catawba. Walker attended Clemson’s football camp three straight summers, and he was considered a lock for the Tigers for a long time.

Right up until Sunday.

Clemson didn’t do anything wrong. Georgia just did a lot right.

Walker got to see UNC and Clemson play in person, both against Notre Dame. He saw Clemson beat the Fighting Irish in the ACC championship game in Charlotte.

The Georgia game he was scheduled to witness in person in December was canceled due to COVID-19, but the Walkers made the trip anyway to take a first-hand look at Athens. You can see it on a computer screen, but you can’t feel it. When he visited, Walker felt all the energy, all the positive vibes he wanted to feel.

He hasn’t shaken hands yet with the Georgia coaches, but there have been long Zoom and FaceTime sessions. He trusts them, feels like he knows them through their verbal exchanges. He loves that they’ve coached linebackers who are a presence on the national stage.

Those first handshakes with coaches will come in June when he finally gets to make an official visit to the Georgia campus.

“I can’t wait to get it all started,” Walker said. “I feel very comfortable with my decision.”

Georgia hasn’t won a national title since 1980 when another Walker, Herschel, was a freshman running back. Georgia hasn’t had a Heisman winner since Herschel took the coveted trophy as a junior in 1982.

But a new day for the Dawgs may be coming.

A young man from Salisbury, an athlete who’s been chosen for the 2022 Under Armour All-America Game, should be right in the middle of  Georgia’s push. Georgia was 8-2 in 2020, losing to Alabama and Florida, but winning a bowl game.

Walker already has turned recruiter. Travis Shaw, the (Greensboro) Grimsley defensive tackle who is the only high school player in North Carolina rated higher than Walker, is going to pick UNC, Clemson or Georgia. He’s friends with Walker, and Walker can be persuasive.

It’s easy to forget that Walker has another Salisbury Hornets football season ahead of him in the fall — hopefully, a full and normal season. The plan is to graduate early and enroll at Georgia and get started with class and football.

He’s a 4.0 GPA student who is eyeing a career in dentistry. He already realizes that football doesn’t last forever, not even for the most gifted.

It’s certainly possible that he’s going to have a lot of people, even complete strangers, yelling “Go Dawgs!”