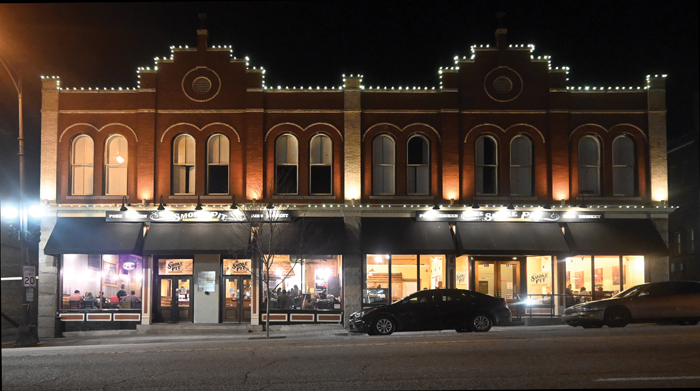 The Smoke Pit is moving from its downtown location to the building on Faith Road that was the former Wink’s BBQ restaurant. Photo by Andy Mooney, Salisbury Post.

SALISBURY — The Smoke Pit may be leaving downtown Salisbury, but fans of the restaurant’s barbecue won’t have to venture far to get a rack of ribs or burnt ends.

At the end of May, The Smoke Pit will move from its current location at 117 E. Innes St. to the building at 509 Faith Road that housed Wink’s BBQ from 2001 until the institution closed last summer. The primary motivation for the move, co-owner Devin Barbee said, was the desire to own a standalone building with more room.

“We’ll have our own parking,” Barbee said. “We’ll have a larger kitchen. We’ll be adding two more smokers to accommodate more catering. Catering and to-gos with COVID has become a norm so that will give us more flexibility with a bigger kitchen.”

Barbee said that he is currently overseeing a total overhaul of the old Wink’s building.

“We’re doing major renovations, basically starting with the four walls and rebuilding the whole interior and a lot in the kitchen to give that place a fresh look,” Barbee said.

Not only will having additional space allow The Smoke Pit to augment its catering business, but it will give the restaurant a chance to expand its menu.

“We’re hoping to expand our menu and have a little more variety since we have a bigger kitchen to operate in,” Barbee said. “We’ll probably have more healthy options as far as salads and bring back some old favorites.”

He mentioned that the restaurant’s popular cheeseburger might be one item that finds its way back on the menu.

The kitchen in the new Smoke Pit Location may be bigger, but the restaurant’s seating capacity will remain at roughly 180 customers.

The Smoke Pit opened its downtown Salisbury location in early 2017, three years after the restaurant’s three co-owners — Barbee, Joey Graham and Jeremy Beaver — opened the original location in Concord. The ever-expanding barbecue chain also has locations in Monroe and Gastonia.

The Salisbury Smoke Pit is the restaurant’s second-best performing location, Barbee said, and he hopes customers will make the move to Faith Road with them. Winning over some of the regulars who kept Wink’s in business for almost 70 years wouldn’t be bad either, he said.

“They are definitely one of the many within our downtown that help to make downtown Salisbury a destination,” Price said. “Great food, great place. To see them leave from our downtown is definitely sad.”

Price said that it’ll be important to quickly fill the void left by one of Salisbury’s most popular barbecue joints.

“With any city or when you’re traveling, you want to see activity,” Price said. “You don’t want to go to a place where everything is empty.”

Whenever a downtown business closes or leaves, Price said, she worries about neighboring businesses that benefit from foot traffic. However, she said that each restaurant or store has its own set of loyal customers that keep their business running.

Price pointed out that Downtown Salisbury lists available rental properties on its website in an effort to connect entrepreneurs with property owners.

While the organization plays a role in marketing open spaces, the ultimate responsibility of finding tenants is up to the property owners.

Michael Young, who owns the building The Smoke Pit has called home for the past four years, doesn’t think it will be too much of a challenge to fill the space.

Before he finds a new tenant, Young said that the first order of business will be to re-install the wall that was taken down when The Smoke Pit moved in. In order to double the restaurant’s square footage and add about 60 more seats, the restaurant’s owners rented the location next door and tore down the wall in between.

“We’re probably going to take it back to a 2,400-foot restaurant and put retail on the other side and put the wall back up,” said Young, who, along with his wife, Diane, owns several other properties downtown.

Even though the space will be smaller, Young said he doesn’t think he’ll have any trouble finding a new restaurant to move in.

“We’ve definitely demonstrated that a good restaurant with a good business plan and good product, good service, good price can work in that location,” Young said. “It’s a dynamite location.”

Young said that The Smoke Pit was a great tenant that simply outgrew its space.

“From the day they opened, they have been slammed,” Young said. “There have been people standing in the street waiting to get in and we just have no more real estate for them.”

Before The Smoke Pit, the space was occupied by a number of restaurants, including Romo’s Pizzeria, Chick N Ale and Uncle Bucks All American Pub & Grub.

Young pointed to the number of other restaurants in downtown Salisbury as another reason why a potential eatery would want to move into the space.

“At last count, there are 19 restaurants downtown,” Young said. “We are definitely a restaurant destination.”

The soon-to-be vacant location is also near a development at 201 E. Innes St. that will bring dozens of jobs and several apartments downtown.