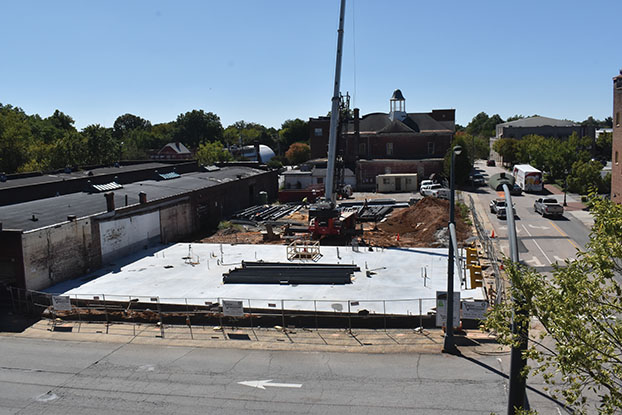 After being delayed by various obstacles, construction on the two-story building at 201 E. Innes St. is finally underway. Tangible process can be seen as concrete has been poured and steel beams have arrived. Ben Stansell/Salisbury Post

SALISBURY — The sights and sounds of construction can be seen and heard on East Innes Street near downtown as a long-planned project finally takes shape.

The sight of a soaring crane moving steel beams on the property is exciting for Pete Bogle, the lead architect of the project.

That project is a two-story building at 201 E. Innes St. set to house office space and apartments.

The building will be erected on the site where the old Bankett Station used to be and contain new offices for Healthcare Management Consultants on the first floor and five apartments on the second. The building is one of several projects Downtown Properties is undertaking that will transform the 200 block of East Innes, said Todd Dagenhart, a partner in Downtown Properties and the vice president and COO of Healthcare Management Consultants.

“I think it’s a great addition to that side of town,” Dagenhart said. “That whole block has been an eyesore. There have been really no tenants and very few businesses over the past 10-15 years. What we’re doing is going to be a great mesh between a new building and some old structures and historic structures that are really cool.”

Along with the two-story building, Downtown Properties is renovating the warehouse next door and has ambitions to build a near replica of the Bankett service station in a lot nearby. 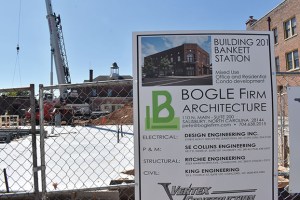 The two-story building at 201 E. Innes St. will house offices for Health Management Consultants on the first floor and five apartments on the second. The project is expected to be completed by August of 2021, if current weather and construction conditions persist. Ben Stansell/Salisbury Post

From almost the very beginning, the project to construct a building at 201 E. Innes St. faced several challenges.

When Bogle discovered that soil on the site was unsuitable for a three-story building, he and Downtown Properties were forced to pivot and plan for a building with only two floors. High material costs then sidelined the project for a short time in 2019. Despite those challenges, the project persisted and construction on the building began a few months ago.

“This one is moving forward,” Bogle said. “Construction timeline on this is right at a year. They’ve been at it for two months now, maybe. I’d say 10 or 11 months now, you’ll have a full building standing here.”

Downtown Properties also has big plans for the old warehouse next door.

With the help of Bogle, Downtown Properties hopes to transform the vacant space into three separate office parcels. Dagenhart said they have already secured two tenants for the warehouse, including a physical therapy clinic operated by Lane Fowler, who is also a partner in Downtown Properties, and a spa-type business that will occupy the middle parcel. Dagenhart is still working to find a tenant for the remaining 1,450 square-foot space at the front of the building.

“We’re hoping that maybe somebody with a small shop or I guess it could be an attorney or anyone who could use that space up front,” Dagenhart said. “You even have road frontage on Innes Street that maybe even a retail place would appreciate.”

Plans are still being finalized for the warehouse, but Dagenhart said that he anticipates contractors beginning work on the project as early as November.

In order to construct the new building at 201 E. Innes St., Downtown Properties had to disassemble the pink granite service station known as Bankett Station that was built on the property in the 1930s.

Dagenhart said that his development group wants to pay homage to that historic structure by recreating it on the empty parking lot at 219 E. Innes St. Dagenhart said that the new building will feature the same facade as the old one, including the iconic garage doors, and will even be the same width. However, the interior of the building will be constructed to fit the needs of the future tenant who moves in.

Dagenhart and his team are currently working on securing a tenant for that space.