Wink’s Barbecue calls it quits after 47 years under one family, 65 as an institution 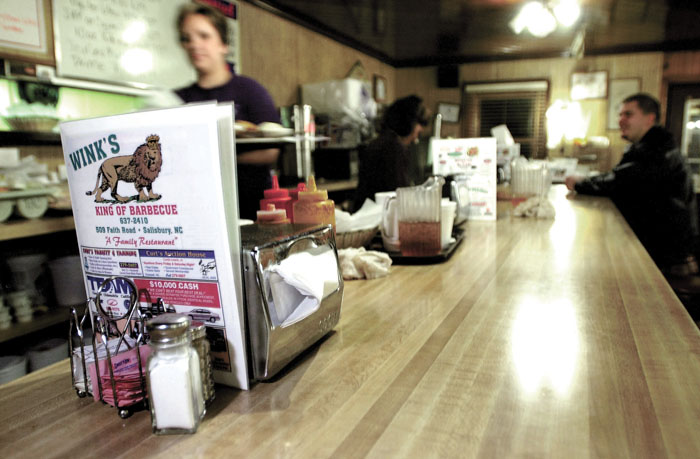 Jon C. Lakey / Salisbury Post file photo. A customer sits at the counter of the Wink’s Resturant location on East Innes Street in 2001.

SALISBURY — For personal and health reasons, the Martin family has decided to close the doors of Wink’s Barbecue after nearly five decades of service.

Byron Martin said the restaurant originally closed as a result of COVID-19 shutdowns and planned to come back when they were allowed to reopen normally, but those plans began to change a few weeks ago.

Martin had previously been diagnosed with multiple sclerosis, and the disease had already reduced his ability to work. When he took some time off from the restaurant, his symptoms improved significantly. His brother has suffered from back pain for years and saw his health issues improve as well.

Martin said his diagnosis held him back from working as hard as he used to, but his family knew he was still putting everything he had into the business.

“They knew my heart and they knew when I was there I was giving all I could give,” Martin said.

Martin said the recent two-week vacation was the longest he has ever taken. His family has devoted their lives to the restaurant. Their mother also had a recent health scare and spent a few weeks hospitalized as a result.

“If we are going to get out of this thing at some point, this would be it,” Martin said. “It’s very bittersweet.”

The restaurant originally opened in 1955 under different ownership and in another location on East Innes Street. In 2001, it moved to its final location.

Dwight and Iris Martin bought the restaurant in 1973. The restaurateurs went on to open Wink’s West on West Innes Street for a time in the 1970s. That location is now Hendrix Barbecue.

Wink’s made the announcement it was closing on its Facebook page on June 16. The post said the family could not adequately express their gratitude for being able to serve Salisbury.

The restaurant and business is for sale, but this may not totally be the end of the road for Wink’s. Byron Martin said he has purchased catering equipment over the years. He has smokers on trailers, deep fryers and charbroilers. He has tossed around the idea of doing some occasional catering with the help of his family, but he is in no hurry. There are other locations around the Southeast called Wink’s Barbecue, but he said they would work with the new owners on the name if the Martins do catering work.