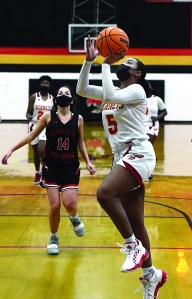 The Spartans were playing for the first time in 19 days and the opponent was Salisbury, a team that is tearing 2A competition to pieces.

But Salisbury outscored the home team 25-5 in the third quarter and won easily 78-38.

The Hornets (6-1, 4-0) have moved up to fourth in the MaxPreps 2A rankings. They’re stifling teams defensively, but they also can run and shoot.

They can punch out opponents in a lot of different ways.

Kyla Bryant made four 3-pointers and scored 22 points. She had six assists and three steals.

Rachel McCullough made three 3s and scored 13. She had five rebounds and five steals.

Natavia Taborn had four assists and is starting to score more. She made a 3-pointer and had seven points.

High school basketball: Another one bites the dust for…