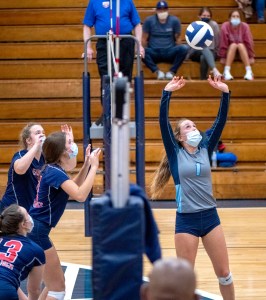 • The CCC tournament will begin on Jan. 4 with the better seeded teams hosting the first round.  Oak Grove will host the semifinals and championship.

West Rowan improved to 4-2 by beating East Rowan for the second time on Tuesday.

• In a loss to South Iredell on Friday, Kary Hales had 35 digs for Carson. Jaden Vaughn had 22 kills and Tate Barger had 36 assists.

Ella Trainor had four kills for the Hornets, with Alli Tuck getting three and Brooke Cunningham two.

Ellen Yang had nine assists and 11 digs. Trainor had nine digs. Madelyn Lawrence had seven digs, while Riley Peltz had five and Grace Blackwell had three.

Rowan County Championships are set for Wednesday afternoon on a new course at Dan Nicholas Park.

Each team has a maximum of seven runners.

North Rowan does not have teams this year.

Races will be run in waves due to COVID limitations.

Catawba’s men’s home game with Tusculum on Wednesday has been postponed.

Catawba now has a game scheduled at Lenoir-Rhyne on Saturday afternoon.

Weant and Teter tied for low gross score with 75s.

Weant won closest to the pin on No. 2, while Hammill made the longest putt on No. 9.

After four decades of working in college athletics, South Atlantic Conference Senior Associate Commissioner and Senior Woman Administrator Eliane Kebbe has decided to step away from the world of athletics.

Kebbe will retire from the SAC at the end of May 2021.