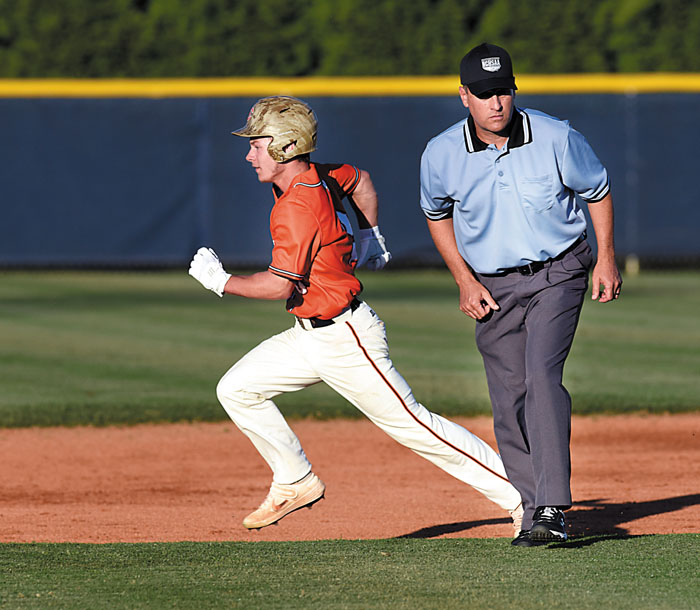 Carson's CP Pyle take off for second base. File photo by Wayne Hinshaw, for the Salisbury Post

SALISBURY — Carson senior Cameron “CP” Pyle made the catch of his life last summer in center field while competing in NC3 baseball.

Because of COVID-19 restrictions, very few fans got to witness it.

“It was hit to the right-center gap at Newman Park and I took off running at an angle toward the fence,” Pyle said. “I made a dive and caught it as I landed on the warning track. Defense is just as important as offense. If a ball is hit in the air, I’m going to do my best to try and get it. If you don’t let the other guys score, they can’t beat you.”

Pyle can really motor — coach Daniel Crosby says he’s the fastest person in Carson’s football program — and he brings gold-glove ability to center field. The bat has been up and down over the course of his career, but if Pyle gets his swing going on a consistent basis, he can be a special college player.

He has committed to play for Caldwell Community College and Technical Institute in Hudson, N.C.

The opportunity to play for the CCC&TI Cobras came about through several connections. Caldwell’s Cole Hales, a teammate of Pyle’s at Carson and on Rowan County American Legion and Rowan NC3 teams, talked up Pyle to Caldwell. Pyle also received a recommendation from Seth Graham, the West Rowan coach who has assisted head coach Jim Gantt with Legion and NC3.

Graham is good friends with CCC&TI head coach Frank Pait, the former Lenoir-Rhyne skipper. Graham made a phone call to Pait, who reminds some people of Gantt.

“He does remind me of Coach Gantt as far as his knowledge of the game,” Pyle said. “I don’t know yet if he’ll be like Coach Gantt on the field.”

Pyle made a splash as a touchdown-scoring running back at Southeast Middle School after his friends and coaches talked him into trying football.

Most of those Southeast boys headed to Carson, forming a large class of football players that was expected to boost the Cougars’ fortunes considerably.

Pyle starred as a jayvee running back as a freshman.

As a sophomore in the fall of 2018, Pyle had some good outings for the varsity. Joe Pinyan was still Carson’s head coach then, and the fullback was a key man in his offense. Pinyan installed Pyle as the fullback. Pyle carried 79 times for 391 yards — 5 yards per carry.

“I was pretty small for fullback,” said Pyle, who is still not very large at 5-foot-6 and 155 pounds.

“CP showed what a team-first guy he was,” Crosby said. “He’d always played running back and we moved him to safety and he never said a word. Then, midway through the season, we started using him at running back, and he was doing well. But then he got hurt.”

Pyle injured his ankle in the home game against North Iredell. Pyle tried a helicopter move, attempted to make a spinning airborne leap over a defender. It was exciting for a few seconds.

Pyle knows it will be his last fling with football. He’s known for a while that his small stature means he has a brighter future on baseball diamonds.

“I stopped growing early, so I realized baseball would be my best opportunity to keep playing in college,” Pyle said. “But I’ll miss football every single day. I’ll miss the guys that I’ve played with since middle school.”

Pyle’s baseball career has been no less interesting.

When he was a freshman, Carson head coach Chris Cauble installed him as the starting second baseman.

Pyle was excellent for a freshman, making the plays in the field, batting .294 and scoring 15 runs for a 24-6 team.

It was the summer between his freshman and sophomore seasons at Carson — the summer of 2018 — that sports fans really started to take notice of Pyle. He made an impact as a youngster with the 33-12 Rowan Legion team, batting .279 and scoring 25 runs. But he didn’t play second base. Gantt usually put him in the outfield.

“I remember Coach Gantt telling me that I was pretty fast and he asked me if I had any experience in the outfield,” Pyle said. “I told him I’d played some out there and I’d be willing to try it.”

That move opened doors for Pyle because his main tool is speed. He could showcase it a lot more frequently in the outfield, running down balls.

But next came a strange slump.

His sophomore season at Carson, Pyle batted .172. Cauble stuck with Pyle through it all, game after game, through thin and thinner, because his speed and defense were helping the Cougars win. Pyle usually hit high in the lineup for a 27-5 team, as Cauble gave him every chance to break out of it.

The mysterious batting famine carried over to Legion. Pyle didn’t get to play a ton in the summer of 2019. He batted .182.

“Baseball can be like that,” Pyle said. “There are going to be good days and bad days as a baseball player, and I had a stretch with a lot of bad days. I had some great coaches working with me, but the hits weren’t falling.”

But then, Pyle may have been the first person who was able to turn the pandemic into something positive.

“When the high school season stopped, it gave me a lot more time to think,” Pyle said. “We didn’t know then if we’d ever get to play again. We didn’t know if we’d have summer baseball. So when the opportunity came to play NC3 baseball, I was determined to make the most of every game.”

Pyle’s comeback during the NC3 baseball season this summer was quite a story. If fans had gotten to see it, it would’ve brought smiles to their faces. Pyle hit better than he’d ever hit before.

“He started to find his swing,” Gantt said. “There’s an awful lot to like about CP. Playing as much football as he has, he’s got a very competitive and hard-nosed approach to baseball. His speed gives him a chance to an exceptional outfielder. All he needsis more game experience. He could come into his own as a baseball player.”

For the NC3 summer, Pyle batted .343 with 24 RBIs. He drove in four runs in a game against Mocksville.

And there was the game at Stanly County in which Pyle pounded two homers.

“That didn’t just shock the world, it shocked me,” Pyle said. “When I hit those balls, I didn’t have any idea they were going out.”

Now Pyle just has to show he can keep hit bat hot with a junior college program. There are no questions about the way he can roam the outfield, and he’s also shown he can handle second base.

A lot of people want Pyle to succeed.

Pyle probably will seek a business degree in college, but his second career option is baseball coach.

He’s had a chance to play for some great ones.

They never gave up on him.

In the ACC, even without fans, there’s no place…