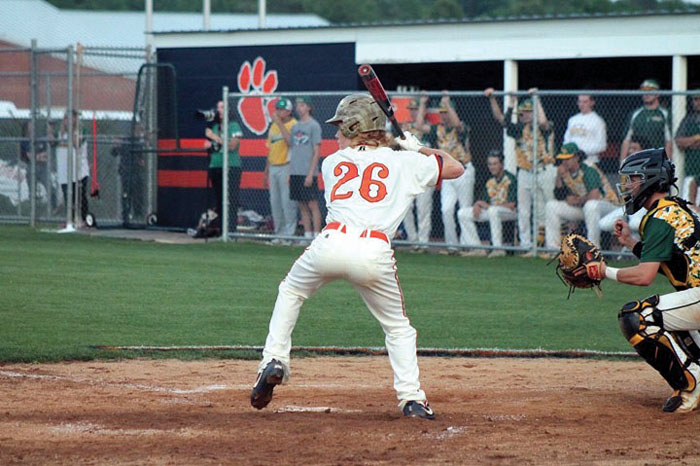 SALISBURY — Caden Hudson was one of the surprises of the NC3 league that stepped in as a temporary summer replacement for American Legion baseball.

He was a surprise of the pleasant sort for Rowan County NC3 coach Jim Gantt, who had never heard of Hudson when he filled out forms at a drive-through sign-up session.

“I didn’t know anything about him before the summer,” Gantt said. “But he has really good speed and a good arm. The potential is there for him to be a very good outfielder.”

Gantt wasn’t the only one who had limited knowledge of Hudson. Everyone who doesn’t follow the Carson jayvee program closely was in that same boat.

Hudson spent almost all of his sophomore season on the jayvees, logging just six at-bats with the varsity Cougars.

His junior year would’ve been his first serious chance to shine as a regular, but Carson’s 2020 season was stopped by COVID-19 after six games.

Hudson got just 14 at-bats, so he remained a mystery.

NC3 ball was a second chance for him. Rowan County had East grad Wayne Mize and North grad Jordan Goodine, plus Hudson’s Carson teammates CP Pyle and Dylan Driver to handle the outfield spots, so Hudson wasn’t expected to play a lot. He got his first chances to swing in the nightcaps of doubleheaders, but he made the most of his opportunities. He banged out 12 hits in his 30 at-bats. That’s easy math — a .400 batting average.

What really stood out is those dozen hits included six doubles and a homer.

“He has surprising power,” Gantt said. “He’s a power threat as well as a stolen-base threat.”

The homer came when Hudson served as the DH against Mocksville at Rich Park.

“I think I got lucky on the homer,” Hudson said modestly. “But I’m fast and I’ve always been able to hit the ball pretty well. I’ve been playing ball since I was 5 or 6. The best thing about this summer was playing for a college coach. Coach Gantt showed me what a college coach is going to expect from me.”

Hudson (5-11, 160) is primarily an outfielder, but he also has gotten some experience as a third baseman. He played quite a bit at that position as a sophomore.

“He’s a team player who does whatever is needed of him,” Carson head coach Chris Cauble said. “He’s a tremendous athlete who runs well, throws well and hits well.”

While he’s not big, Hudson also has played football for the Cougars in the past and used his speed to compete at a high level. He was one of Carson’s 2019 nominees for All-Rowan County as a defensive back. He had four interceptions, six pass breakups and 32 tackles.

He says he does not plan to participate in the shortened high school football season planned for the spring of 2021.

He’s going to focus instead on having a huge senior season in baseball.

“We’re counting on him as one of our top four hitters in the lineup and as a team leader,” Cauble said.

Hudson already knows he will get a chance to continue with baseball and his education after high school. In October, he made a verbal commitment to the Shelby-based Cleveland Community College baseball program. It’s a two-year junior college.

If you haven’t heard of that program yet, there’s a reason. The CCC Yetis — yes, the Yetis — will be making their baseball debut this spring. The school has been around a long time, since 1965, but it hasn’t taken the plunge into athletics until recently. The money was approved to build a baseball facility in 2019.

Chris Sherrill, who has served as a Carson assistant, will an assistant coach for CCC. That’s the connection that led to Hudson choosing CCC.

Hudson has continued to work on baseball since his surprise summer showing.

“He’s one of those guys who embraces the day-to-day effort required to be a good baseball player,” Gantt said.

Hudson played for a Carson fall league team that was a playoff semifinalist.

He also got experience playing for the Showtime Blue Jays, a travel team organized and coached by Davie County coach Bradley Rudisill. The Jays competed in three high-profile tournaments with a roster of under-the-radar players like Hudson. They went 6-3-1, won a tournament in the mountains and even edged a South Charlotte Panthers squad in Greensboro.

“It was good experience and a lot of fun playing with some of the kids from other schools who are usually rivals,” Hudson said.

Like everyone else, Hudson has been making adjustments in recent months.

He let his red hair grow for about two years, by his estimation. It used to flow out from under his batting helmet, but he’s had a significant trim. He says he just got tired of the long locks.

Gantt, one of his biggest fans, was pleased with the haircut.

“Caden is a ballplayer, and now he also looks like one,” Gantt said with a smile.

Cauble agrees that Hudson is a ballplayer.

“Junior college can be a springboard for him,” Cauble said. “He can land in a good program.”