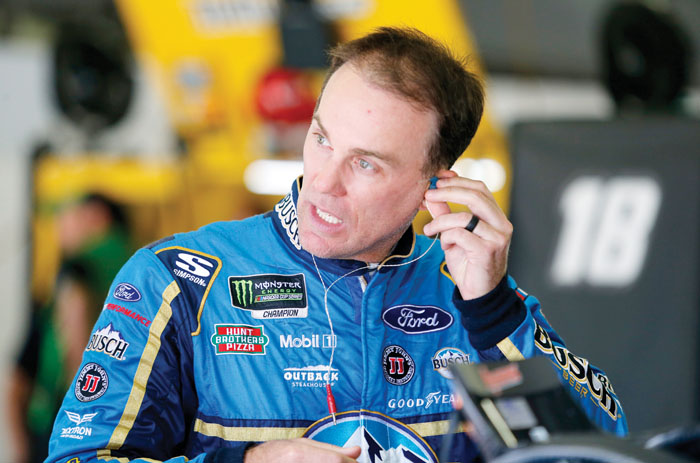 AVONDALE, Ariz. (AP) — Kevin Harvick was a sure bet to make the NASCAR finale and likely close out one of the most dominant seasons of the decade.

Instead, he’s been eliminated and the hyped head-to-head matchup between Harvick and Denny Hamlin has been scrapped. For better or worse, NASCAR’s title-deciding format knocked the strongest team this season from contention for Sunday’s winner-take-all final four at Phoenix Raceway.

“I’m not going to view if we win it any different whether he was in or out,” Hamlin said Thursday.

No one denies Harvick deserved a chance at the title. He won a series-high nine times, had a whopping 20 top-five finishes and led nearly every statistical category this year. It was a back-and-forth between Harvick and Hamlin that most assumed would go down to the finale.

But Harvick had a poor third round of the playoffs and his season collapsed. He’s out of the way and Hamlin will race Chase Elliott, Brad Keselowski and Joey Logano for the Cup Series championship.

It’s a much cleaner path to the title since Harvick is a nine-time winner at Phoenix, which is hosting NASCAR’s championship weekend for the first time.

Out of the mix for the title, he might still be in contention for the race win.

“They’ve got a chip on the shoulder and if they’ve got a fast car, they are going to give the guys in the championship a whole lot of trouble,” said NBC Sports analyst Dale Earnhardt Jr. “I think Harvick might hustle up in there and just not care.”

Hamlin, a seven-race winner this season, believes the champion has to win Sunday. But he also knows Harvick has nothing to lose.

“I still think I’m going to have to race him,” Hamlin said. “I would think they probably come loaded and ready to go out and show that they should be champions, right? I don’t expect him to waffle around and just kind of let all four of us go race for it.”

Hamlin has had conversations with Harvick and some of his Stewart-Haas Racing crew since Harvick’s dramatic elimination. Hamlin appreciates the season his rival has put together in the pandemic-altered season, when there was no practice or qualifying, and Harvick and crew were good every week with the car brought straight from the shop.

Harvick was so focused on winning a second Cup title that he
homeschooled his 8-year-old to minimize health risks. The No. 4 team was locked in on the championship and everyone expected them at Phoenix.

“In my mind he was deserving of racing for a championship, but didn’t earn it because of the system,” Hamlin said. “I understand their pain.”

There’s a balance, though, in commiserating with Harvick and exulting over the opportunity ahead. Keselowski won a series-high six races in 2014 but didn’t make it to the final four that season, the year Harvick won his only title.

Now Keselowski is in the championship round with a chance at his own second crown.

“It’s a helpless feeling. It’s a frustrating feeling. But it’s what the format is,” Keselowski said. “I do feel those sympathies for him. In a selfish way, I’m glad that I won’t have to compete against him.”

Logano raced his way into the finale as the only playoff driver with a third-round victory. Since clinching his berth three weeks ago, his Team Penske crew has been focused on a plan for Phoenix and doesn’t much care about Harvick’s fate.

“I honestly as a competitor don’t have many feelings for others,” Logano said. “When I’m competing, it’s about my team.”

Elliott, racing in the final four for the first time in his career, has somewhat shielded himself from the dramatics of the season and focused only on his Hendrick Motorsports effort. He’s taken a break from social media over the closing months of the season and didn’t focus on Harvick’s season.

“For us to sit here and talk about others, or the other three guys in it, or who’s not in it, who somebody thinks the favorite is or isn’t, is just very unproductive in my eyes,” Elliott said. “I’m just really thinking about us, being selfish in a lot of ways this week, trying to put emphasis on the things that are going to make us go fast. Me ranking Kevin’s season is not one of them.”

AVONDALE, Ariz. (AP) — The underappreciated Truck Series opens NASCAR’s championship weekend with an under-the-lights shootout tonight that could be the most entertaining event at Phoenix Raceway.

The path to the winner-take-all finale has been a flat-out demolition derby with two consecutive weeks of wild driving. Wrecks, both deliberately caused and the result of over-aggressive driving, have made the Truck Series race the one to watch.

This final four showdown for NASCAR’s feeder series pits a trio of drivers from GMS Racing against veteran Grant Enfinger, the lone driver from ThorSport Racing to advance. GMS Racing and Thorsport are stalwarts of the series that combine to field nine full-time entries.

Brett Moffitt is in the GMS group and looking for a second truck championship in three years.

Moffitt and GMS teammates Sheldon Creed, an X-Games gold medalist and two-time Stadium Super Trucks Series champion, and rookie Zane Smith are in Chevrolets. Enfinger is in a Ford, and the finalists have combined to win 11 of the 22 races this season.

All four drivers had to muscle their way into the championship race via racing that could be considered both daring and dumb. Smith likened last week’s elimination race at Martinsville Speedway to the chaos of a local track referred to as “The Madhouse,” and said Truck Series drivers are all hungry to climb NASCAR’s national ladder.

Charlene Greer, a volunteer with the organization for nearly a decade, beat three other finalists for the award that is presented annually to a
NASCAR fan who champions children’s causes. Greer, a Daytona Beach resident, volunteers nearly 120 hours each month at the Boys & Girls Clubs.

The $100,000 award will cover the costs of afterschool bus transportation for more than 1,400 children to the eight Boys & Girls clubs in the area surrounding NASCAR’s headquarters. The other three finalists received $25,000 donations.