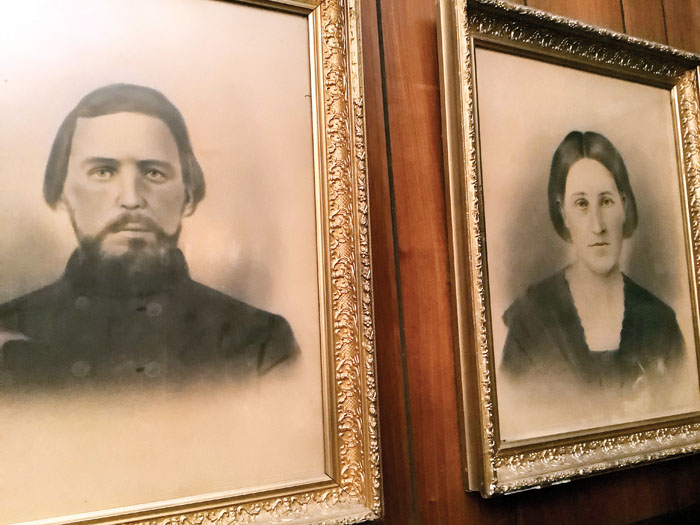 Samuel Sloan, brother of John Locke Sloan, and Sarah Cowan Sloan are the great-grandparents of Dr. Norman Sloop of Salisbury.

It’s always fun for me when I get a large amount of feedback on a column or a feature story. Almost always, the story has been fun to write in the first place. Such has been the case with the story of the 1850s Sloan Mill, the site of which has just been discovered adjacent to my farm and featured last week.

Always a history nut, I quickly realized that there were others who wanted to know more about the mill. Some communicated that they had long ago relatives who used the mill and others were longtime residents of the Mill Bridge area but knew nothing of the mill’s existence. “I never knew,” was a common statement as was, “Please share if you find out more.”

With that said, I have learned additional information. About the mill itself, the waterwheel power was the undershot style, meaning that the wheel had paddles on it and was driven by the passing water through a narrow area called by some the mill race. The wheel was built entirely of wood and was likely made of a mix of oak, pine and cypress. The wheel itself took constant maintenance.

Two massive stones turned by the power of the waterwheel were used to grind flour, cornmeal or livestock feed from the grain provided by local farmers. Other smaller stones were likely used to do specialized work.

The Post received a call from Dr. Norman Sloop of Salisbury who offered to help as a descendant of mill owner, John Locke Sloan. Sloan was Dr. Sloop’s great-great-uncle. I visited with Dr. Sloop, an authority on most things Mill Bridge and with the Sloop, Sloan and Bradshaw families. He has extensive records and shared some interesting information. Dr. Sloop shared Senate Bill No. 35 from 1863 which exempted millers, blacksmiths, foundry workers and others from service in the Confederate Army. Millers were exempt because their service was critical to the survival of people on the home front as well as supplying food for the army.

Since John Sloan did not have sons old enough to run the mill during the war, his brother Sam was exempted to help run the mill. Dr. Sloop was sure that John also continued the operation of the mill during the War Between the States as well. Both John and Sam were officers in the Home Guard, charged with home defense and arresting conscripts and deserters. The Home Guard was also required to drill at least once a month unless they were called into actual service to repel invasion, suppress insurrection or to execute laws of the state. One brother, Junius, died of disease in Richmond, Virginia, while serving with the 34th N.C. Regiment. Their other brother, Thomas, did not serve, probably because of poor health.

Mill owner John Sloan, called one of Mill Bridge’s leading citizens, was born in 1823 and died in 1901. His first wife, Mary Cowan, died in 1856 while his second wife, Selena Crowell, died in 1892. Sloan had three children with Mary and eight with Selena. Sam Sloan married Sarah Jane Cowan, so brothers married sisters. And finally, Sam and Sarah were Dr. Sloop’s great grandparents.

We’ve added Dr. Sloop to the Sloan Mill committee that is still in search of the elusive mill photo and what is buried along the Sloan Creek bank, as well any other existing information. We’ll share what we find along the way. And don’t be surprised that a few of us go tramping along the banks of Sloan Creek thinking of what used to be.

Library notes: What’s in my wallet? A state library…