Football: Lowe played in an era of rushing legends 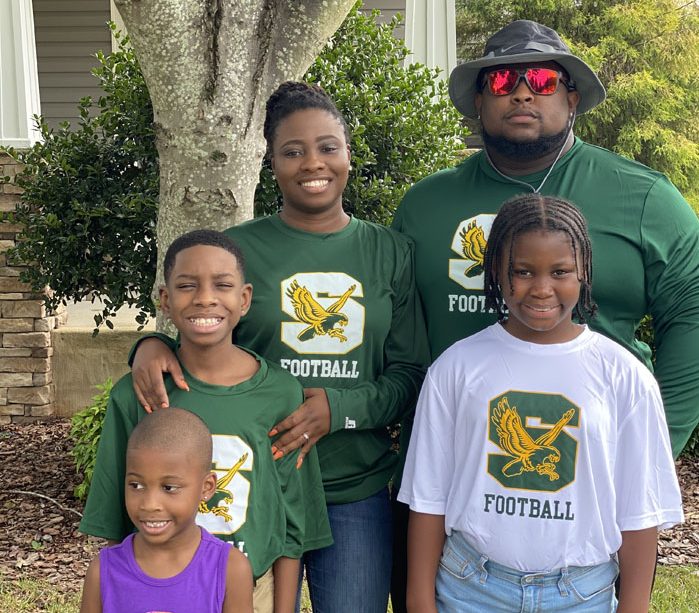 SALISBURY —  Thomas Lowe’s football career is a story of what might have been, but it’s also a story about what was.

He spent his freshman year on the East Rowan jayvees and played in only three games as a junior, but his two full varsity seasons were epic.  Lowe still ranks 11th on the county’s all-time rushing list with 3,471 yards.

Lowe obviously wasn’t the only factor on two good very teams, but he was a pivotal piece of the puzzle.

In an era in Rowan County in which running backs racked up more yards and more touchdowns and more headlines than in any other, Lowe was always part of the conversation, even though contemporaries and adversaries included the county’s all-time rusher and AP state player of the year (West Rowan’s KP Parks), the county’s No. 2 all-time rusher (Carson’s Shaun Warren) and a NCHSAA male athlete of the year (Salisbury’s Romar Morris).

That was daunting competition, to say the least, some of the best of all-time.

“You’d get the paper first thing on Saturday morning and see how all the other backs in the county did,” Lowe said. “We all had our own distinct styles, we all ran the ball differently, but I always felt like I was the best. It was important for me to feel that way. As a competitor, you have to believe in yourself. You can’t go out there thinking, ‘Well, I want to be the second-best guy.’ I had balance, I had speed, I had power, and I had vision. I wasn’t as shifty as some of those other guys, but I was a very good back.”

He had tremendous power in his legs. His weight-room squats were legendary.

Life often comes full circle, and that has been the case with Lowe. If he briefly got sidetracked his junior year in high school, he was able to pull himself together again as a senior. There were tough lessons that cut him deeply and bit a huge chunk out of his career stats and his place in Rowan football history, but the school of hard knocks also taught him well. He knows what adversity is and knows how to fight back from it.

Lowe is now a mental health professional with a master’s degree. He works at Daymark Recovery Services in Davidson County, helping people who are fighting addiction and substance abuse. He’s also been hired by an old friend to coach the running backs, handle quality control and guide the strength and conditioning efforts at Ben L. Smith High in Greensboro.

Ben L. Smith, the school from which five-time NBA all-star Bob McAdoo graduated in the late 1960s, is a 4A school with about 1,500 students.

“There are a lot of kids at Smith that a college scholarship would change their lives for the better,” Lowe said. “Football can be their saving grace.  I want to help them cope with everything they’re dealing with in these crazy times, help them make the right decisions.”

Lowe’s family has brought a lot to Rowan athletics.

Thomas’ uncle, Willie, who passed away in 2019, was one of the outstanding football players in East Rowan history, a defensive anchor on the unbeaten 1969 team. Thomas’ aunt, Marilyn, was a shot put champ for East. Thomas’ father, Greg, was a champion for East in the old Western North Carolina High School Activities Association in wrestling as well as in the shot put.

Lowe’s cousin, Darius Beaty, was an outstanding running back at South Rowan and put up huge numbers for the Raiders in 2004 and 2005.

Growing up in Granite Quarry, Lowe would become a good wrestler, but football was his favorite thing, right from the start.

“I was that little tot that was always running around with a football,” he said.

His freshman year at East Rowan, he probably could’ve bolstered the varsity, but his father preferred that he learn the ropes on the jayvees. It’s a big jump to varsity from middle school for anyone, so  Lowe suited up for just one varsity game in 2006 for coach Jim Crawley and played briefly.

“That was the South Rowan game,” Lowe said. “My father was teaching at Corriher-Lipe (in Landis) and I had gone to Corriher-Lipe as an eighth-grader, so he wanted me to play against South. I got my first varsity carry.”

His debut as a sophomore in 2007 for new coach Brian Hinson was far more spectacular. East rolled 42-21 against Salisbury in stunning fashion, with Lowe announcing his presence with authority. He accounted for 198 rushing yards and four touchdowns, and Rowan County had another star running back.

That Salisbury game was an emotional outing for a struggling program. East snapped a 20-game losing streak to Rowan opponents that night.

“That night we beat Salisbury was the first time I had ever seen my dad cry,” Lowe said.

The next week, Lowe had 127 rushing yards as East won against North Rowan for the first time in 16 years.

There was a game against South Rowan that season in which Lowe and his blockers produced one of the strongest rushing games in East history — 37 carries for 271 yards and four TDs in a 43-29 victory that ended the Mustangs’ long losing streak to the Raiders.

Lowe was expected to pick up right where he left off when the 2008 season began, but third-quarter cramps limited him to 120 yards on opening night, as Salisbury pummeled the Mustangs.

He got 151 tough yards on 32 carries to spark a win against North Rowan, but then East took it on the chin from West Iredell in the North Piedmont Conference opener, and a frustrated Lowe’s season was suddenly over.

“Circumstances happened and I was dismissed from the team,” Lowe said. “It was all unfortunate. I loved playing for Coach Hinson, but things happened.”

Lowe would transfer to South Rowan. He wouldn’t play again in 2008.

“I got pneumonia and was physically sick for several weeks in addition to being mentally sick about everything that happened,” Lowe said. “Football was everything to me, and now it was gone.”

East would flounder to a 1-10 record without him. Meanwhile, Lowe would start preparing himself mentally and physically for a 2009 comeback with South. He began a bonding process with new teammates that spring and that summer.

“I can’t say enough about Coach (Jason) Rollins and Coach (Steven) London at South,” Lowe said. “Beyond football, they cared about me as a student and a man.  I also learned a lot about conditioning from Coach (Jan) Dowling when I got to South. Things fell into place.  I got ready for a big senior year.”

South had the best collection of skill people it had boasted in many years in 2009, with D’Andre Harris teaming with Lowe in the backfield and Blake Houston throwing passes to B.J. Grant. South also had athletes on the defensive side of the ball such as future college players Mark McDaniel and Cadarreus Mason.

“I played my best football as a senior,” Lowe said. “I had packed on more muscle and weighed 205 pounds. I was smarter. As a young back, I just trusted my instincts whenever I carried the ball, but as a senior I knew how to read the defensive linemen and the linebackers. Maybe I’d get 4 yards on one play, but I’d go back to the huddle knowing I could get 30 on the next carry. I practiced hard that year. I practiced so hard, some of our defensive guys got mad at me.”

He didn’t have the workload he had at East. Harris was a good back and was going to get 10 or 12 carries a game, while Lowe would normally get 15 to 18. They became an efficient two-headed monster. Both were among the county’s top five rushers.

“I learned a lot about team and being a team player,” Lowe said. “No, I didn’t get the amount of carries I got at East, but I learned to be happy with it. I pushed myself and my coaches pushed me to make the most of every one of them.”

There was a four-game stretch in the North Piedmont Conference in which Lowe scored 12 touchdowns. Harris sat out the Statesville game with a hamstring injury, but Lowe had 13 carries for 182 yards and four touchdowns in a 76-22 destruction of the Greyhounds.

“We scored a lot of points that season,” Lowe said. “That was the year we beat A.L. Brown, but then we lost to Northwest Cabarrus the next week. As a team, we learned from every win and every loss.”

Lowe’s aborted junior season may have been a red flag for some college recruiters, although South coaches did everything they could. When recruiters came around, they lauded his efforts on and off the field. He drew interest from FCS programs such as North Carolina Central, North Carolina A&T and Howard.

“There was a coaching change and a lot of the freshmen lost their scholarships,” Lowe said. “They’d named an interim coach and he wanted to bring in his own guy, but then he ended up not getting the job, after all. I loved North Carolina Central and never wanted to leave, but I didn’t have much choice.”

He was on some rosters after that. He was at Wingate for a while. He even played in a Blue-White Spring Game for Catawba. But the opportunity to get meaningful carries never opened up.

“Then I made the decision to go back to North Carolina Central,” Lowe said. “I’d started college there, and that’s where I wanted to finish. I had some injury issues, but by then I had  figured out that getting a degree was the most important thing. I was on the team at North Carolina Central, and it was a good learning experience. I became a student of the game and started making a transition from player to coach.”

In June, Lowe agreed to help the man who had once recruited him. The plan is for Lowe to continue working in Lexington, and then travel on to Greensboro for football. At  least that will be the plan if things ever get back to normal.

It’s been a challenging beginning for Lowe at Ben L. Smith, to say the least.

With COVID-19 restrictions, the Ben L. Smith players haven’t been able to work out.  Lowe not only hasn’t been able to get them in the weight room yet, he still hasn’t met them, in person.

Lowe, like many coaches and administrators, believes that spring football is the most likely scenario for this school year.

“As a coach, you break down a lot of film and watch film, so I’m getting to know the kids I’ll be coaching that way,” Lowe said. “But I’m anxious to get to know them and to get them in the weight room. I’ve got some expertise to offer there.”

Lowe is married. He has a daughter and two step-sons. They live in Salisbury.

“Well, I’ve got two (video) gamers,” Lowe said with a laugh. “But I’ve also got a 4-year-old who sits and watches film with me. We got him a football a few weeks ago, and he hasn’t put it down yet.”