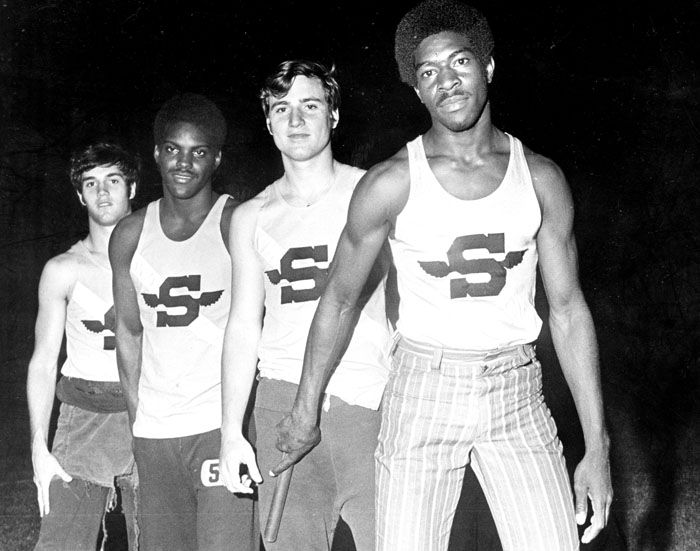 SALISBURY —Fifty years ago, a lot happened in the sports world in the merry month of May.

Down in Dallas, Jack Nicklaus beat Arnold Palmer in a playoff to take the Byron Nelson Golf Classic to the dismay of perhaps the most boisterous and animated gallery in golf history. South Carolina announced it would stay in the ACC (well, at least for a little while longer). Richard Petty experienced a terrible crash in the Rebel 400, but his harshest injury was a shoulder dislocation.

Locally, a large chunk of the sports news in May, 1970, was made by an extraordinary and versatile Boyden High athlete named Roger Jackson.

Jackson, a standout halfback for the football team, was smashing hurdles records, sprinting on winning relay teams and turning in solid jumps in 1970, and track and field was a huge deal then in Rowan County. The Post’s Ed Dupree, who averaged three track stories per week, and a group of Hall of Fame coaches, who were known mostly for football, labored long and hard to make it a huge deal.

Track and field became one of the main events in the old Western North Carolina High School Activities Association (WNCHSAA). That’s the defunct organization that schools such as East Rowan, West Rowan, North Rowan, South Rowan, A.L. Brown and Davie County belonged to for decades. It was an association of only four conferences, but they were large conferences. Those four conferences included many of the prime athletic schools in the Piedmont and foothills.

For years, Salisbury’s Boyden High remained at arm’s length from the rest of  Rowan County as a member of the state association (NCHSAA). In the 1966-67 school year, Boyden teams, known as the Yellow Jackets, were still tangling with the likes of Parkland, Page, West Forsyth, R.J. Reynolds and Greensboro Smith in the Central 4A Conference.

Prior to the 1967-68 school year, Boyden became a member of the WNCHSAA and the South Piedmont Conference. Economically, it was the only thing to do. It made a lot more sense to travel to Statesville and Concord than to Greensboro and Winston-Salem.

Track and field in the early years of the WNCHSAA was dominated by Shelby, Hickory and Statesville. But coach Burt Barger built a North Rowan program in the early 1960s that started winning league championships. Then in 1965, North became the first Rowan school to break through and take the WNCHSAA title in track and field. The Cavaliers repeated in 1966. They three-peated in 1967. Sprinter Donnie Jones and hurdlers David Chapman and Ricky Leonard were individual WNCHSAA champs in that era.

A.L. Brown ended North’s reign in 1968, with champion miler Terry Helms and an army of sprinters, including Haskel Stanback. Davie, which had Hubert West and Jingles Ijames, among others, grabbed the title in 1969.

Salisbury’s school for black students, J.C. Price was closed in the spring of 1969, which meant a fully integrated Boyden High for the 1969-70 school year. It was a transitional year for the school’s athletic program, which had been getting strong contributions from black athletes since the mid-1960s. In that 1969-70 school year, Boyden made the subtle, but socially important, mascot change from Yellow Jackets to Hornets. The full transition to Salisbury High Hornets was in progress.

A track meet in the spring of 1970 was similar to one in 2020, as far as the field events. The shot put, discus, pole vault, triple jump and high jump were all contested in 1970. So was the long jump, although it was usually referred to as the broad jump.

But on the track, all was different. American high school track was still governed by yards, not meters. That change wouldn’t come to Rowan County until 1980. A 1970 lap around the track was the 440-yard run. Two laps made it the 880-yard run. Four laps for the mile. A half-lap was the 220-yard dash. There also was a 100-yard dash.

The three relay events convered 440 yards, 880 yards and the mile. Hurdling events were the 120-yard high hurdles and the 180-yard low hurdles.

The Boyden Hornets had not won championships before but they were ready to make a push in the track and field world in the spring of 1970. Pete Stout, the school’s legendary football coach, performed double duty as the track coach, and he insisted that football players who weren’t playing baseball report for track workouts. He’d find events for them.

Boyden had plenty of athletes. Only a few months earlier, Boyden had won the WNCHSAA championship in boys basketball, with Kenny Holt, James Brown, Reggie Childers, David Fisher, James Partee and David Jones sparking a steamroller 26-0 team that limited Marion to 35 points in the title game.

Next was the North and South Piedmont Conference Championship Meet — a mingling of the two rival leagues in an event known as the Bi-Conference.

The Post’s Dupree carefully calculated the probable results of each of the 16 events in the meet and figured out exactly where each of the 496 points available in a 10-8-6-4-2-1 scoring system would fall. He predicted Boyden would hold off A.L. Brown for the title, 99-91, with defending champ Davie third and North Piedmont Conference champ East Rowan fourth.

Dupree knew his stuff. The Wonders scored 91.5 points for second place. Boyden did even better than he expected, winning the meet comfortably with 107.5 points.

Jackson won both hurdling events, dashed a leg on the winning 880 relay team and added a fourth in the triple jump.

Track and field is theoretically one of the more predictable sports.

After all, coaches know exactly how fast their athletes can run for a certain distance, exactly how far or how high they can jump, exactly how far they can throw. Track and field is a sport where every athlete can focus on his strengths. He competes in his specialty or specialties and his coaches put him in the events where he has the best chance to rack up points.

Boyden was unbeaten heading into the WNCHSAA Championships hosted by North Rowan. It was the last hurdle for a perfect season. It was supposed to be tight, with no margin for error. One ankle sprain or off day or dropped baton could make all the difference. Dupree’s system calculated the final results would be Boyden 80, Shelby 79.5, A.L. Brown 78.

Other athletes from other schools were sure to be heard from, including Crest’s David Thompson, who was the favorite in the triple jump. He would become one of the all-time great college basketball players two years later at N.C. State. Stanback, a future NFL back for the Atlanta Falcons, was still the model of speed and strength for A.L. Brown in 1970 and was favored to win his specialty, the 220. In the 100, Brown’s Tony Davis, another member of the football backfield, was even swifter than Stanback. Shelby had football hero Marcus Mauney ready for the sprints and jumps, while Davie still had Ijames in uniform.

A lot of things happened that shook up the point projections. Ijames competed, but he had a back issue and wasn’t his usual self. For whatever reason, Stanback didn’t place in the 220. Thompson only finished fourth in the triple (although he would win that event in 1971).

All the Hornets performed close to their peak or beyond it. The team set four meet records and tied one. The result was an overwhelming victory, a track blowout — Boyden 97, second-place Shelby 67.

Jackson was credited with 24.5 points. He won both hurdling events and broke the meet record with a 14.9 clocking in the 120 high hurdles and 20.7 in the 180 low hurdles. He ran on the winning 880 relay team and was fifth in the triple jump.

Boyden swept the relays, including a surprising win in the 440 relay, where the Hornets had been seeded fourth and hadn’t beaten A.L. Brown all season. That relay team was John Hanford, Dennis Brisson, Aubrey Childers and Mike Partee.

The mile relay team of Brisson, Childers, Gary Powers and sophomore Terry Beattie prevailed, as did the 880 relay team of Jackson, Powers, Childers and Hanford.

Childers, a star back on the football team, won the 100 in 9.9 seconds, tying the meet record.

Football star Robert Pulliam, who would later star on defense at Tennessee,  won the shot put with a mighty meet-record heave of 55 feet, 5 1/4 inches.

In the spring of 1971, the Hornets would repeat as WNCHSAA track and field champions. Jackson, who won five WNCHSAA hurdles championships in three seasons, would beat his own record in the high hurdles with a 14.6 clocking, while Childers would run another 9.9 100. Beattie would win the 200. The team would win two relays.

Salisbury three-peated in 1972 and would win its fourth WNCHSAA track and field title for Stout in 1976.

The WNCHSAA closed up shop shortly after its 1977 track and field championships. Davie won the last meet and three of the last four. After that, the WNCHSAA schools were absorbed by the NCHSAA.

The only WNCHSAA track and field championship meet for girls was held in 1977. North Gaston edged East Rowan, 78-76, to win it.

Boyden won its third WNCHSAA title of the auspicious spring of 1970  a few days after its track triumph. Charlie Isenhour led the Hornets’ golf team to the championship at Cowan’s Ford Golf Club.

If you’re wondering how the 1970 WNCHSAA track athletes would have stacked up had they competed in the state association, it’s possible none of them would have won an individual state championship, although they would’ve placed high. Jackson’s hurdling times were very strong, but not quite as quick as the ones being turned in by future East Carolina football star Carlester Crumpler of Wilson’s Fike High. NCHSAA athletes probably gained some advantage over their WNCHSAA counterparts by competing on the new tartan track surface at N.C. State.

Pulliam’s powerful shot put was still 4 inches short of the winning heave in the NCHSAA’s 3A/4A State Championships in 1970. Childress’ 9.9 100 was fast, but there were 9.8s run in the NCHSAA.

In some other events, the 1970 WNCHSAA winners weren’t as close to their NCHSAA rivals. South Mecklenburg’s Bobby Jones, the future UNC and NBA basketball star, high-jumped 6 feet, 6 inches to take the NCHSAA 3A/4A title. No one cleared 6 feet in the WNCHSAA meet.

Jackson was voted “Most Outstanding” for the 1970 WNCHSAA Championships.

That epic effort still may not have been the best day of his high school athletic career.

But the ensuing kickoff was fielded by Jackson. His 60-yard kickoff return to set up Boyden’s first touchdown may have been the key play of the game.

There are a lot of deserving people waiting at the door for entrance to the Salisbury-Rowan Sports Hall of Fame. Jackson, who is 67 now, is among them.

His nephew is already in the Hall. American Legion and East Rowan baseball and football star Cal Hayes Jr. was inducted in 2018.

gh at us that we’d have a two-hour Saturday practice,” Barrier said. “But we never had that practice.”

Stout also is proud of what his track teams accomplished. There were WNCHSAA championship teams in 1970, 1971, 1972 and 1976.
“Rowan County track was really good then at every school,” Stout said. “If you could win the county, you could win the state. We got our best athletes out there, and we did a good job of record-keeping. We kept stats and our runners always knew what records they were shooting for.”