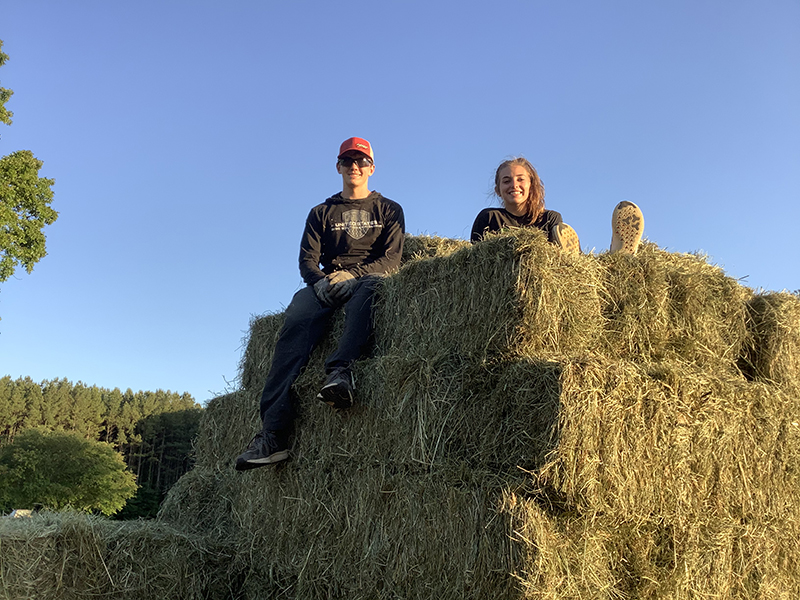 Photo by David Freeze - Lewis and Harrison take ceremonial ride atop the last load on the way to the barn.

Rowan and surrounding areas have been busy with a bumper spring hay crop for the last two weeks. Hay-making equipment has been running at a rapid rate to beat the next round of rainy weather.

Hay making has changed over the years from a labor-driven method that filled barn lofts with countless square bales perfect for handling by one person. Available labor has been scarce, forcing hay-making to shift emphasis to bales big enough to require movement by tractors instead of people. Farm fields and sheds across the country are usually filled with big round or rectangle shaped bales.

But there is still a significant market for the one-person sized bales, often for horses. Finding the labor to move hundreds of 50- to 60-pound bales by wagon and trailer loads to barns and sheds is nearly impossible nowadays.

Managing the field to barn process was Sam Freeze.

He said, “We’ve been partnering with the Hoffner family to get the hay in the last few years. They have the big equipment and we have the hay fields. We share the labor and time required to get it done, then split the hay.”

Freeze had two brand new workers in the field with him Friday afternoon as he hoped to get about 400 of the square bales in the barn by nightfall.

“Good help is almost impossible to find for this kind of work. The bales are heavy, the pace is fast, and it can be hot and dirty,” Freeze said. “Not many people want to do it.”

Adalie Harrison, an 18-year-old senior at East Rowan, wanted to challenge herself. She said,

“I wanted to see just how hard it would be,” Harrison said.

No stranger to physical achievement, Harrison has been an exceptional high school athlete and is headed to Lenoir-Rhyne University in Hickory on a basketball scholarship.

Joining Harrison was 19-year-old Clayton Lewis, who just finished his freshman year at Catawba College. Lewis is majoring in exercise science and he’s an avid disc golfer. Part of his motivation was getting in a good workout with the YMCA closed, but he also wanted to help.

With quality gloves and long sleeve shirts and pants, Harrison and Lewis got busy quickly. Hoffner baled the hay, dropping it on the ground. Harrison and Lewis picked up the bales and placed them on the hay wagon where Freeze stacked them.

“I got started the same way,” Freeze said. “Help was needed way back when I was 12, and I’m now 31. I knew right away that Harrison and Lewis were working hard. They picked up the bales faster than I could stack them. They hustled from bale to wagon and back for another. I haven’t seen enthusiasm like this in a long time.”

As Hoffner baled the hay, he watched the young group working.

“We have struggled to find help on our farm for years. Today’s youth just aren’t as dependable, and they don’t want tough working conditions,” Hoffner said. “I watched these two teens busting it to keep up a good pace and I couldn’t help but smile. They were working just like we were expected to when I was their age.”

The crew brought wagonload after wagonload to the barn where Harrison sent them up the hay conveyor to the loft. Lewis stacked them there. They kept up a steady pace, only stopping for water and, finally, impending darkness. About 400 bales filled the available loft space.

Hoffner called the teens’ work a certain rite of passage.

“They earned my praise with their work ethic,” he said. “Not many kids, or anyone, can do this anymore and these two excelled today. I offered both of them a future job on the spot.”

Harrison weighs 120 pounds and is 5 feet 1 inch tall, and said she loved the experienced.

“I used my knees to help lift the bales and kept it mostly out of my hair. That was important,” she said.

Lewis, 6 feet tall, 160 pounds and battling allergies, added, “I will do it again too, but definitely with my long sleeves and shirt tucked in. It was a great workout.”

Freeze summed up the effort by saying both youngsters learned something about themselves on Friday.

“For all of us, nothing’s prettier than an empty green field when all the hay is in the barn,” he said.