Teri Shaw closes out her 2019 in style 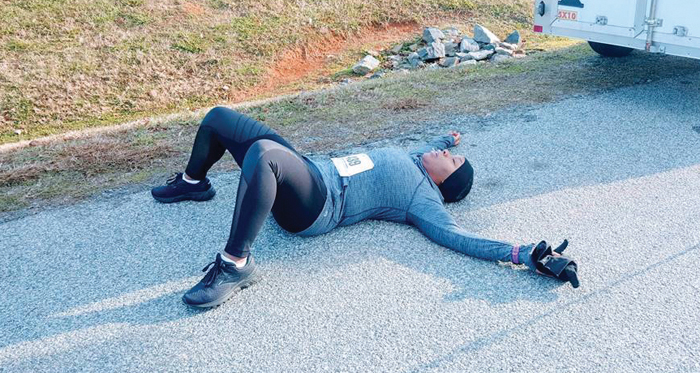 Teri Shaw just after finishing the Resolution Run 5K on Wednesday morning in a new personal best of 30:59 . Photo by Brooke Taylor.

On New Year’s Day, Teri Shaw had two goals. The first one was to race the Resolution Run 5K at The Forum and set a new personal best. The second one was to meet a specific weight loss goal. 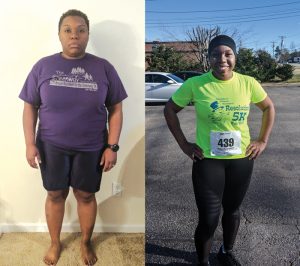 Teri Shaw, then and now.

Teri is a recreation coordinator for Salisbury Parks and Recreation where she manages the City Park Recreation Center. She sought me out late in 2018, asking if she could be considered for the Post’s wellness/fitness program. Teri had the right attitude and great reasons, and she got the spot.

Working on her goal of better fitness, Teri lost some things and gained others. One of the things she gained was the ability to see and feel her collar bone and Teri was most proud of that. Much bigger things happened along the way too.

On the list of things lost, gone is being controlled by food! Teri said, “Food, learning to eat better and understanding how food is fuel for the body and not just for taste. Tricking the taste buds at times to fight cravings, like eating some fruit to curb a sugar craving instead of eating a cookie that will leave me sluggish. This will be ongoing learning; there are so many foods I have really learned to like and others I don’t.”

I asked Teri about the biggest eye opener along the way.

She said, “The human body is amazing and we don’t give it enough credit. My body’s response in the beginning to doing more activity was to hurt, because I was not used to moving. Quickly, I began noticing it took less effort to do things and my breathing was better and I felt better overall. To feel good became my focus and goal and then I started seeing results in my weight.”

While looking backwards with all those extra pounds carried, Teri realized it was more than just “weight” but years of build-up with no release. She said, “I’m so glad I accepted this challenge, with one goal being weight loss, but not knowing how much more I would gain for a better life. Now I know this is just the beginning, I know what I’m made of without selling myself short anymore! Self-care is a must, not an option!

“I am most proud that my success came from my hard work and commitment. I didn’t do any fad diets or extreme workout plans. When asked over the year what I was doing, I think this response has shocked some people. What I am doing is sustainable and doesn’t cost me a lot of money. I pay in sweat and that is worth it!”

After her own successful Salisbury Post wellness journey with a weight loss of 51 pounds in 2017, Brooke Taylor was on hand to support Teri for her 5K and final weigh in. Brooke said, “It has been incredibly motivating to watch Teri’s fitness journey this year. She was determined to be a success and made up her mind right away to blow the roof off of this program. I am so proud of all that she has accomplished.”

The Forum General Manager Rayna Gardner agreed, “Teri’s transformation over this last year has been such a joy to witness. For sure, the physical transformation, but her light just keeps getting brighter and brighter. Her positive attitude rubs off on those around her and I hope she will be around here for a long, long time!” 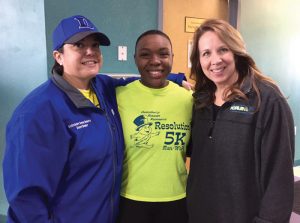 L-R, Brooke Taylor, Teri Shaw and Rayna Gardner at The Forum are all smiles for Teri’s final weigh-in. Photo by David Freeze

The final result for Teri is a weight loss of 60 pounds. The final weigh in placed Teri’s BMI at 30.23, just one pound short of dropping out of obesity. Just as telling is Teri’s improvement as a runner. Prior to starting this program, Teri had a best 5K of 48 minutes and 9 seconds. She lowered that to 30 minutes and 59 seconds, a pace of 9:58 per mile, at the Resolution 5K on Wednesday morning.

Philip Martin, who dropped out of the program about mid-year, does continue to exercise on a regular basis.

From my perspective, it was almost a magical year for Teri. She only missed one scheduled workout and that was due to a bus issue for her daughters. Always upbeat, Teri challenged herself at every workout and was gracious when others complimented her effort. Teri knew that others could be inspired by her success from the start and she made it happen. Congratulations Teri!!
The Forum and Rowan County YMCA, along with Novant Health, were other sponsors.

Teri’s final thoughts included, “I plan to keep up what I have started. I think the reality that I have to keep it going will hit me when I wake up on Monday and realize I don’t have to meet with David at 7:30 a.m. At that point I will remind myself, you may not have to meet, but you still have a very important appointment and obligation, so get moving!”