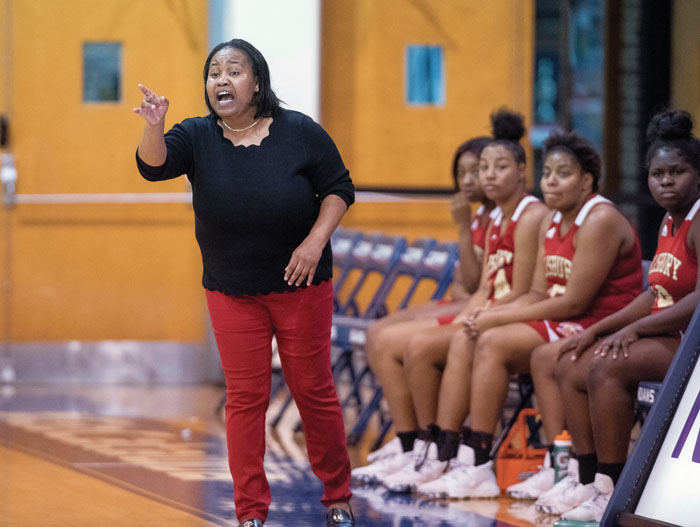 SALISBURY — Salisbury’s youth movement scored all but nine of the points and with some senior leadership mixed in, the Hornets presented head coach Lakai Brice with her 100th win, Saturday at Goodman Gym.

Brice’s Hornets defeated East Rowan, 50-41, in the girls consolation final of the Dale’s/Sam Moir Christmas Classic. In winning third place, Salisbury exits the tournament with a still shiny 9-1 record. Salisbury came into the event at 7-0 and after a first-round win, fell to West Rowan in Friday’s semifinal.

The Mustangs, meanwhile, were the No. 1 seed at 10-0, and defeated Davie County in Thursday’s first round. But coach Kevin Holland’s East team lost to Carson in the semifinals and after Saturday’s loss, exits at 11-2.

Salisbury freshman Kyla Bryant, Brice’s daughter, scored 15 points and two sophomores, Rachel McCullough and Jaleiah Gibson, followed with 12 and 8 points, respectively. But it was the steady ball-handing and late free-throw shooting of senior guard Anayia Fulson that put the game away.

After East had pulled to within 44-40 on a three-point play from 6-0 sophomore Mary Spry, Fulson and Bryant sank 6-of-8 foul shots down the stretch and even forced an crucial turnover by the Mustangs with 31 seconds left.

“East fought us all the way, but I’m proud of my girls for competing hard to the finish, too,” said Brice, who starred as a player at Catawba. Fittingly, her 100th coaching victory came on Goodman Gym’s Sam Moir Floor.

“I knew about it (100 wins), but it was the least thing on my mind,” added Brice. “I just wanted my girls to go out there and compete and play hard and they did, and got No. 100 for me. And what a way to get it, on the home court where I played myself. Third place is better than fourth, so we’ll take it.”

Saturday’s contest was all about the front-court pressure of Salisbury’s quick, physical defense. The Hornets forced nine first-quarter turnovers by the Mustangs, and while the period ended with the score at a competitive 9-6, the empty possessions kept potential points off the scoreboard for East.

“I usually do a full-court press, but this time, with playing three days straight, I decided to back it up and do a half-court, man-to-man and get after them,” said Brice. “They did turn it over some and we got them out of their sets.”

Holland, disappointed but not downcast, acknowledged that the early pressure by Salisbury “knocked” the Mustangs off their game for a while.

“The tougher team came out and they were really physical with us,” said Holland. “We didn’t respond well and were sloppy with the ball. Salisbury was really the tougher team all day. They really dug in and were active and aggressive and it took us the whole first half to get acclimated.

“In the second half, I thought we settled in a little bit and really turned it into a game,” continued Holland. “But our outside shooting wasn’t there all day and we missed some shots that could have really changed momentum. We missed that kind of shot, but Salisbury made some of those.”

After the 9-6 first quarter, Bryant took over the second period with 11 points, drilling four straight jumpers, three of which were from behind the 3-point arc. Bryant’s last 3-pointer came with just seconds left in the half, and Salisbury led at the break, 24-17.

East battled in the second half, but, as Holland said, lacked the hot streak that could have changed the flow of the game. The third and fourth quarters saw identical scores — Salisbury taking the frames, 13-12.

Bryant was 4-of-9 from the floor (3-of-3) on 3-point attempts and 4-of-5 at the foul line. McCullough was 4-of-7 from 3-point land, including a couple of “daggers,” when she buried two straight in the third period. Those buckets gave the Hornets a 30-23 advantage.

“Those 3s by Rachel really hurt their comeback try,” said Brice. “Rachel really came through for us, and played almost the entire game.”

Freshman Jamecia Huntley scored just five points (all free throws) but was a force inside for Salisbury and grabbed eight rebounds. She left the game in the fourth period with an apparent should injury, but returned three minutes later and finished the game.

Spry led East with 5-of-8 shooting and two foul shots for 12 points. She also pulled down a game-high 10 boards. Caroline Houpe, a senior, connected for East’s only two 3-pointers and finished with 10 points. As a team, the Mustangs were 2-of-14 from behind the arc.

Holland added: “The great thing about the Christmas tournament, while you want to be the champion, the season doesn’t end and we’re walking out of here with a winning record — with losses only to Carson and Salisbury, two of the best teams around.

“All you want is chance to be in it,” continued Holland. “This game was one you had to earn. Salisbury earned it and although we played hard, we didn’t play well enough for 32 minutes.”