Panthers may start rookie QB Will Grier in next game 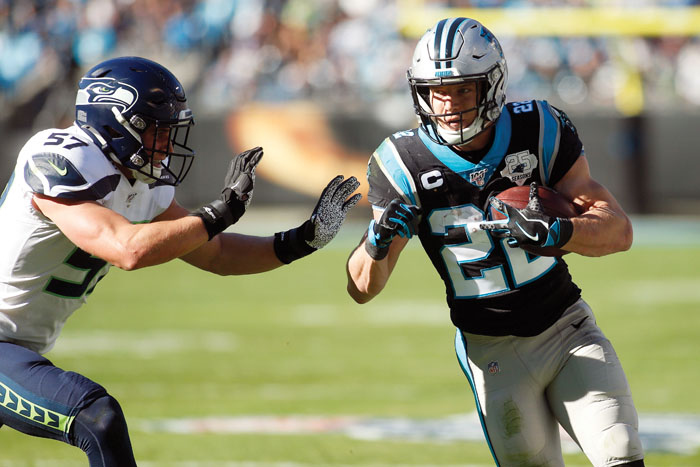 CHARLOTTE (AP) — It may be Will Grier time in Carolina.

Panthers interim coach Perry Fewell said he’s considering making a change at quarterback this week against the Indianapolis Colts. Fewell said he’ll decide Wednesday on whether to turn to Grier, a rookie third-round pick from West Virginia, or stick with the struggling Kyle Allen.

“Over the next two days we will continue to evaluate and you will know on Wednesday,” Fewell said Monday.

Allen had three interceptions in a 30-24 loss to the Seattle Seahawks on Sunday, resulting in Carolina’s sixth straight loss.

He has thrown 15 picks this season and turned it over seven times on fumbles. His 22 turnovers in just 12 starts are more than Cam Newton has had in any of his nine seasons in Carolina.

Fewell said he liked how Allen played in the fourth quarter against the Seahawks, rallying the Panthers to two touchdowns after falling behind 30-10.

But overall he said Allen missed some opportunities.

“I do believe there were plays out there to be made and at times he didn’t make those plays that needed to be made,” Fewell said. “And that goes along with the position of quarterback. … I thought he did some solid things and obviously some not-so good things.”

Allen questioned his own decision-making after the game.

“I put us in some bad positions today,” Allen said. “Didn’t play the way I needed to play to help us win the game. Stuff at the end doesn’t really matter because I just put us in bad positions. Turned the ball over too much. Just not helping this team win.”

Grier, who grew up in the Charlotte area, has not played in an NFL game after struggling at times in the preseason.

Former head coach Ron Rivera said earlier this season that Grier wasn’t quite ready to play and was still making the transition to the NFL game, although he had plenty of promise. Grier has mostly been taking reps with the scout team offense, so a decision would need to be made by Wednesday.

With two games remaining and nothing left to lose it would seem the Panthers would want to find out if Grier figures into their long-term plans at quarterback.

Christian McCaffrey. The third-year running back continues to have an MVP-type season leading the NFL in yards from scrimmage (2,121) and touchdowns (18). McCaffrey became the first Carolina player to reach 2,000 yards from scrimmage on Sunday, and needs 186 yards receiving over the next two games to join Roger Craig and Marshall Faulk as the only running backs in NFL history to have 1,000 yards rushing and receiving in the same season.

Injuries on the line have decimated the Panthers’ run defense, which wasn’t all that good to begin with. The loss of Kawann Short early in the season and an injury to Dontari Poe last month have left the Panthers without a stout run defender at the point of attack, forcing the coaching staff to gimmick up the defensive scheme to account for the lack of size. That has often resulted in teams regularly dominating the Panthers for big gains. Chris Carson became the latest running back to post a 100-yard game against Carolina and also scored twice on the ground. The Panthers are giving up more than 140 yards per game on the ground and have allowed a whopping 26 touchdowns rushing. To put that in perspective, no other team has allowed more than 19 touchdowns on the ground.

WR D.J. Moore. The Panthers’ second-year wide receiver is quietly having a solid season, making a strong case to be the team’s No. 1 wide receiver moving forward. Moore has 86 receptions for 1,174 yards and four touchdowns this season through 14 games. Over the past nine games, Moore has really stepped up his production, averaging nearly seven receptions and more than 101 yards receiving per game.

Panthers interim coach Perry Fewell. Fewell isn’t making much of a case to become the team’s full-time coach, not that he figures to be a primary candidate anyway. Panthers owner David Tepper has already indicated that he is leaning toward hiring an offensive-minded coach from the NFL ranks as the full-time replacement for Ron Rivera. Fewell’s background is on defense.

Panthers tight end Greg Olsen said he has been cleared from the concussion protocol and wants to play the final two games and finish out strong. Olsen said Monday he would prefer to be back with Carolina next season, but knows that decision may be out of his control. He is owed $11.8 million in 2020, the final year of his contract, but the Panthers could save $8.1 million by releasing him. Olsen said he still feels as if he can compete at a high level next season and would prefer to remain with the Panthers. It’s expected Olsen will also have offers in television broadcasting to weigh this offseason.

6 — Consecutive losses for the Panthers this season. If the season ended today, the Panthers would draft somewhere between seventh and 12th as six teams are currently tied at 5-9.

The Panthers play their final road game Sunday at Indianapolis and then finish up at home against the Saints.