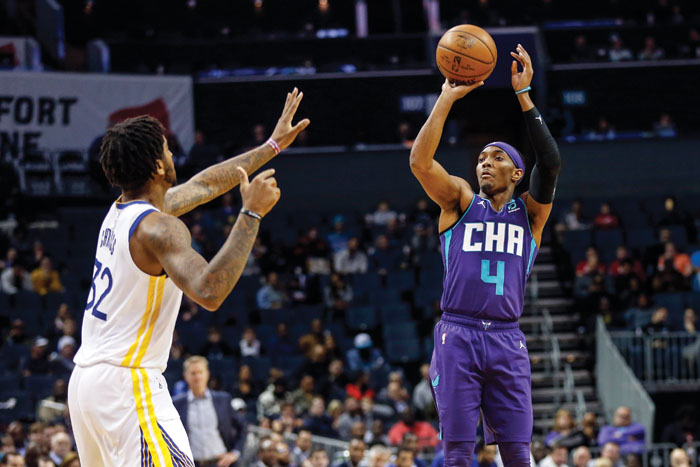 CHARLOTTE (AP) — Devonte Graham made 10 3-pointers and scored 33 points, and the Charlotte Hornets spoiled D’Angelo Russell’s return to the court with a 106-91 victory over the Golden State Warriors on Wednesday night.

Graham was 10 of 16 from beyond the arc and also dished out nine assists and had seven rebounds for the Hornets (9-14), who stopped a two-game slide.

Russell finished with 18 points on 7-of-13 shooting in 25 minutes after missing the last nine games with a right thumb sprain.

Russell did most of his damage in the first half, scoring 15 points.

He started to heat up in the second quarter, scoring eight points on three straight possessions. He beat Graham with a quick drive from the wing and drew a foul for a three-point play, knocked down a 3 from the top of the key and then scored on another drive down the middle of the lane to help the Warriors claw back to within four at halftime.

The Warriors (4-19) have lost four straight on their current road trip.

Warriors: Eric Paschall entered the game as the first Warriors rookie to score in double figures 11 straight games since Klay Thompson. He finished with 16 points. … Draymond Green played one night after having his jersey retired at Michigan State.

Hornets: Swept the two-game season series. … Graham has made at least three 3-pointers in 15 games this season. … Dwayne Bacon made his first 3-pointer since Nov. 18.

Warriors: Wrap up a five-game road trip Friday night against the Bulls.

Hornets: Back home Friday night to host the Nets.

DETROIT (AP) — Giannis Antetokounmpo scored 35 points to lift the Milwaukee Bucks to their 13th consecutive victory, 127-103 over the Detroit Pistons on Wednesday night.

The last time the Bucks had a longer winning streak than this was when they won 16 in a row spanning the end of the 1972-73 season and the beginning of 1973-74. They also had a 13-game run shortly after that 16-game streak ended.

Milwaukee had won its previous two games by 41 and 44 points, and the Pistons had won their previous two by 34 and 33. This one wasn’t close, either. The Bucks have dominated Detroit of late.

Milwaukee won all eight matchups with the Pistons last season — four in the regular season and four in the first round of the playoffs.

Jayson Tatum added 19 points to help Boston improve to 8-0 at home. Brown connected on a season-high six 3-pointers, and Walker had seven assists and four rebounds.

Jimmy Butler led the Heat with a season-high 37 points.

and had six rebounds and four assists. Former Celtic Kelly Olynyk added 12 points, and Duncan Robinson and Justise Winslow each had 10. Miami had won three in a row.

Heat coach Erik Spoelstra left the team in the morning, flying home to be with wife Nikki for the birth of their second son. Assistant coach Dan Craig ran the team.

Brown hit two 3-pointers and Semi Ojeleye had one — all coming from the left corner directly in front of the Heat bench just over a minute apart — during a 9-1 spurt that pushed Boston’s lead to 80-67 late in the third quarter. The Celtics led by 13 after three quarters.

Boston then scored the first seven points of the fourth, making it 89-69 on Carsen Edwards’ 3 from the right wing.

Heat: Craig spent his high school years living about 40 minutes away from TD Garden in Chelmsford and rooting for the Celtics. “It worked out kind of funny,” he said. “I’m back home and I’m going to coach this game. It’s pretty exciting.” Craig also ran the team in March of 2018 when Spoelstra was away for the birth of his first son. The Heat also lost that game.

Celtics: Guard Marcus Smart missed the game due to illness. Coach Brad Stevens said he would have been “doubtful” with a sore oblique, but “the illness knocked him out” of playing.

The Heat led by 11 points midway into the second quarter before the Celtics closed the half by scoring 26 of the final 33 points. Walker had nine of the points and Tatum eight in the spree over the final 7:09, including two shots from beyond the arc.