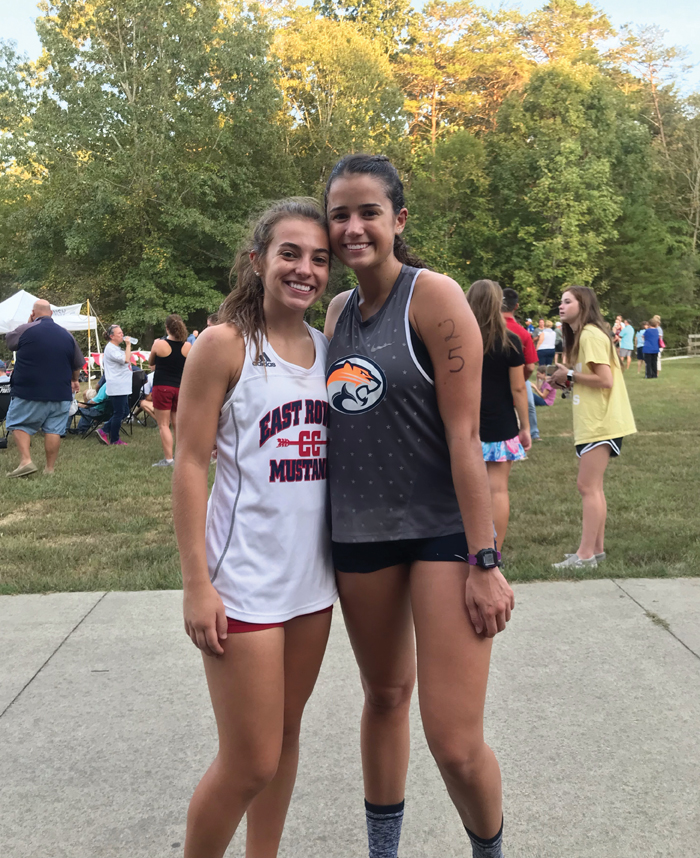 There is a recent Gatorade commercial out that suggests the best way to get better at a particular sport is to find a rival who pushes you. I had Ed Frye and Steve Staley, Larry Bird had Magic Johnson and now Adalie Harrison and Taylor Conrad have each other.

Both senior cross-country runners, they don’t agree on how they first met. Adalie said, “We first met in middle school through track, but we weren’t very familiar with each other until high school.”

Taylor had more. She said, “We first met in middle school basketball, 7th grade. Adalie went to Erwin, while I went to Southeast. We both were point guards and the leading scorers for our teams. Not really friends, more just acquaintances from playing basketball until the 8th grade basketball tournament. I fouled Adalie really bad and she took a hard fall. I helped her up, making sure she was okay. That’s where we became more than just acquaintances.”

She said, “I thought that the season would be back and forth from the start. I knew Adalie had trained more this past summer than last year, so I knew she would pose quite a challenge. I kept pushing myself every practice because I visualized what Adalie was doing over at East to prepare for the next race.”

Adalie, East’s best runner, said, “After the pre-county race I realized my competition was Taylor and where I stood. I knew I had to work hard to get where I wanted to be.”

Both girls had setbacks during earlier years. Adalie had an ankle injury as a freshman, then missed her sophomore season. Taylor dealt with a hip injury and then a dehydration issue in last year’s county meet. Both were healthy and fit as they entered the 2019 season. Taylor dominated the early season, then had a strong conference meet, crediting her summer training.

She said, “Consistency was a major positive about my senior season. A big part of that was confidence and drive. Running is so mental, and I was more mentally strong than last year. Adalie really pushed me to stay with her during the later races.”

Adalie dominated in the last two races and added, “My best races came with winning the county championship, and strong runs in the regional and state meets. My times generally improved as we went along, eventually running in the 20s.” Adalie had a best time of 20:39 while Taylor posted 20:51.

The rivalry doesn’t end with cross country. Both girls started playing for highly rated basketball teams this past week.

Adalie said, “Our team goals are high as we are currently ranked 3rd in the conference but I think we have a chance to be first, our biggest goal. For basketball my individual goals are to make all county, first team all-conference and score my 1,000 career points.”

Taylor said, “My individual goals for basketball are to be a leader for my team and to contribute in whatever ways are necessary; such as rebounds, taking charges, communication on the court, all the little things to make a difference. We are a very strong shooting team but small, so I will play post or small forward. Team goals include “three-peat” Christmas tournament champions, conference champions, and to be a contender in the state playoffs again.”

Both girls will play soccer and run track in the spring. Taylor is a long-time soccer player while Adalie will play for the first time.

I watched both girls push each other hard and then congratulate each other afterwards, the best kind of rivalry.

Adalie said, “We are better people because of the rivalry. We both work harder because we want the same thing. We are great friends before and after whatever we are competing in, always happy for one another. We are only rivals during the contests.”

Taylor said, “Our friendly rivalry made me better because I had to work hard enough to compete with Adalie. She really improved a lot during the season, pushing me to try to beat her, keep her in my sights, or stay close to her. We pushed each other to running a good time and also lifted each other up at the start/finish line.”

She continued, “I think our bond grew closer because of cross country. Without that bond, she would just have been a rival, instead of a friendly rival!”

But before that, both Adalie and Taylor plan to race in Salisbury’s largest 5K at The Forum’s Butterball 5K on Thanksgiving morning. Both will compete for Rowan’s fastest female runner. Look for it and other events at www.salisburyrowanrunners.org