Allen leads Nets to victory over Hornets; Warriors lose by 48 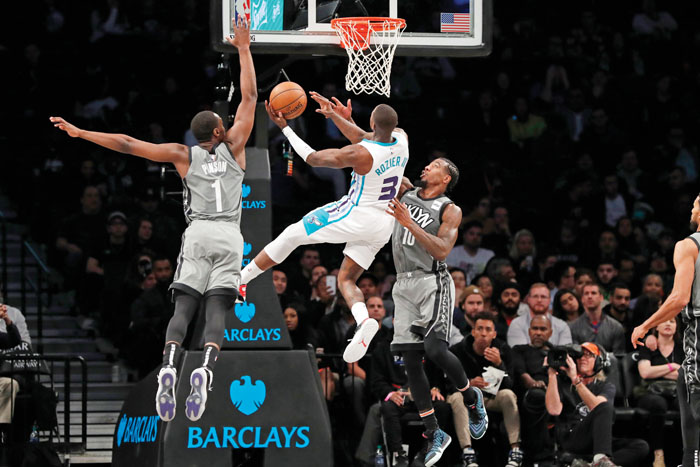 NEW YORK (AP) — Jarrett Allen had 22 points and 17 rebounds, and the Brooklyn Nets beat the Charlotte Hornets 101-91 on Wednesday night.

Taurean Prince and Spencer Dinwiddie added 20 points apiece for Brooklyn, which was without Kyrie Irving for the third straight game because of a right shoulder injury.

Terry Rozier had 18 points and Devonte’ Graham added 17 for Charlotte, which lost its second straight game.

Charlotte held the Nets to two points through the first five minutes of the fourth quarter to cut the deficit to 84-81. But the Nets regrouped. Prince’s driving layup gave the Nets a 95-86 lead with 3:28 remaining and they never looked back.

Brooklyn held the Hornets to 73 points, the fewest the Nets have allowed through three quarters this season, to take a nine-point lead into the fourth quarter. Allen led the Nets with 11 points in the third.

The Nets took a 56-51 lead into the locker room at the half as Prince and DeAndre Jordan led all scorers with 12 points each.

Both teams scored 26 apiece in the first quarter as Prince led the Nets with nine points and Bismack Biyombo scored eight for Charlotte.

Nets: Coach Kenny Atkinson on Irving’s injury status: “I don’t think it’s a long-term thing. I wouldn’t say we’re being overcautious. … Do I think it’s a long-term thing? No. I don’t think he can play through it right now quite honestly. That’s where we are. We’ll see where that goes.” … Caris LeVert (right thumb surgery) is also out for Brooklyn.

DALLAS (AP) — Luka Doncic scored 33 of his 35 points in the first half and had yet another triple-double to help the Dallas Mavericks rout the short-handed Golden State Warriors 142-94 on Wednesday night.

The second-year star from Slovenia had 22 points, five assists and five rebounds in the first quarter alone. He played only 25 minutes total, but still managed 10 rebounds and 11 assists.

Doncic was coming off a 40-point triple-double Monday night against San Antonio, and has an NBA-best seven triple-doubles in 14 games this season.

The Mavericks never trailed and tied a franchise record with 22 3-pointers while sending Golden State to its worst loss since a 1973 playoff game.

Tim Hardaway Jr. added 20 for Dallas. Kristaps Porzingis had 14 points and 10 rebounds for his fourth-straight double-double. Eric Paschall led the Warriors with 22 points.

PHILADELPHIA (AP) — Ben Simmons hit the first 3-pointer of his career and had 18 points and 13 assists to lead Philadelphia past New York.

Mike Scott’s fourth 3-pointer with 1:29 left stretched the Sixers’ lead to 99-95 and they held on after New York’s Marcus Morris hit a pair of 3s in the final 10 seconds. Joel Embiid had 23 points and 13 rebounds, and Scott scored 12 points.

Simmons did the improbable when he fired a 24-footer from the corner in front of the 76ers’ bench, sending the crowd into a frenzy. Simmons received a lengthy standing ovation for the first 3-pointer after 17 misses (and one more miss in the postseason).

Morris led the Knicks with 22 points.

MIAMI (AP) — Duncan Robinson set Miami records for 3-pointers in a quarter and a half on his way to 29 points and Miami beat Cleveland to remain unbeaten at home.

Playing in front of his college coach — the Cavs’ John Beilein, who had Robinson at Michigan — the second-year guard was 9 for 15 from the field, with all those shots coming from behind the arc. Robinson set team marks with seven 3-pointers in the second quarter and eight in the first half.

Antetokounmpo, the reigning NBA MVP, has had at least 30 points and 10 rebounds an NBA-best nine times this season. The Bucks have won nine of 10 and improved to an NBA-best 8-2 on the road.

Bogdanovic and Mitchell each hit three 3-pointers in the fourth quarter. Bogdanovic was 6 of 11 from 3-point range, and Mitchell 5 of 10 to help Utah rebound for a home loss to Minnesota on Monday night.

Andrew Wiggins had 22 points for Minnesota after missing three games because of personal reasons and an illness. Karl-Anthony Towns was held to 14 points and struggled with foul trouble most of the night.

Davis Bertans, acquired by Washington from San Antonio in the offseason, scored 21 points, and so did Ish Smith.

CHICAGO (AP) — Lauri Markkanen scored 24 points to bust out of a slump, Wendell Carter Jr. had 12 points and 15 rebounds and Chicago beat Detroit.

Derrick Rose had 18 points and Blake Griffin — in his third game of the season — added 16 for Detroit.