Clemson looks for another win over W. Forest 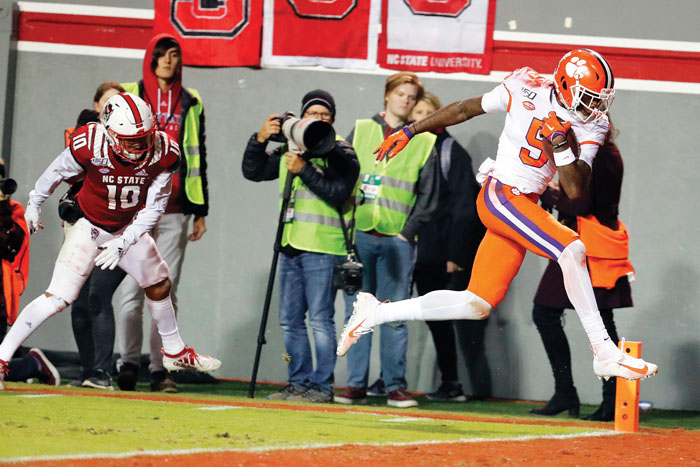 Clemson's Travis Etienne (9) breaks away from North Carolina State's Tanner Ingle (10) to score during the first half of an NCAA college football game in Raleigh, N.C., Saturday, Nov. 9, 2019. (AP Photo/Karl B DeBlaker)

Here are things to watch in the Atlantic Coast Conference in Week 12:

Wake Forest at No. 3 Clemson. Both teams might be better off if the Tigers (10-0, 7-0, No. 3 CFP) beat the Demon Deacons (7-2, 3-2). A Wake Forest win would almost certainly knock Clemson out of the playoff picture and put the Atlantic Division-champion Tigers on track for the Orange Bowl if they win the league title game. Wake Forest’s only shot at the Orange Bowl is for Clemson to make the playoff, leaving the Demon Deacons as league’s second-highest-ranked team. Wake Forest was eliminated from the division race with its loss last week at Virginia Tech.

Clemson: RB Travis Etienne. The defending ACC player of the year is making a bid for a second straight award. He leads all league runners with a nearly nine-yard a carry average and his 13 rushing TDs are tied for first in the league.

Clemson has won 10 straight in the series. In fact, Wake Forest’s last win in 2008 led to the ouster of former coach Tommy Bowden and elevation of Dabo Swinney as interim coach. … Wake Forest will be without receiver Sage Surratt, the ACC leader with 111 yards a game, who is out for the year with an unspecified injury that the school said will require surgery. … Along with its 25-game overall win streak, Clemson is seeking its 22nd straight victory at home to break the program record it tied two weeks ago when it beat Wofford at Memorial Stadium. … Clemson plans to honor 19 seniors playing for a final time at Death Valley. The honorees include former Clemson offensive lineman Zach Giella, who was suspended last December for testing positive for banned substance ostarine. Giella lost an appeal of his yearlong suspension and left the team since was in his final season. … Wake Forest’s senior class had had four winning seasons, the first time that’s happened in 71 years.

Georgia Tech offense vs. Virginia Tech defense. Slowly but steadily, the rebuilding Yellow Jackets have shown improvement with the ball, gaining at last 345 total yards in three of their last four games after barely topping 300 in their first five. That progress will be tested by a resurgent Virginia Tech team that has won four of five to vault into Coastal Division contention and held powerful Wake Forest to a season-low — by far — 301 total yards last week.

There’s still no clarity in the Coastal Division race, which is led by Virginia (7-3, 5-2) with Virginia Tech and Pittsburgh also at the two-loss mark and three others — Miami, North Carolina and Duke — each having three league losses. Ten league games involving at least one Coastal team remain, and according to the league, there remain 1,024 possible permutations for the seven teams in the final standings.

Could Syracuse keep it closer than the 10-point spread at Duke? The Orange (3-6, 0-5) are the only ACC team winless in league play and this week’s visit to Durham, North Carolina, might give them their best shot at a conference victory. They’ll have to find a way to keep the Blue Devils’ blitzers away from QB Tommy DeVito. Syracuse ranks last in the Bowl Subdivision, allowing 5 sacks per game.

Look for Florida State WR Tamorrion Terry to make some big plays and put up some big numbers this week against Alabama State of the FCS. Terry had career bests with seven catches for 156 yards in a victory over Boston College, and his 74-yard touchdown was his school-record fourth of at least 70 yards in his two-year career. He also has six grabs that have covered at least 60 yards apiece.

NASCAR’s final 4 in fun mode ahead of championship…