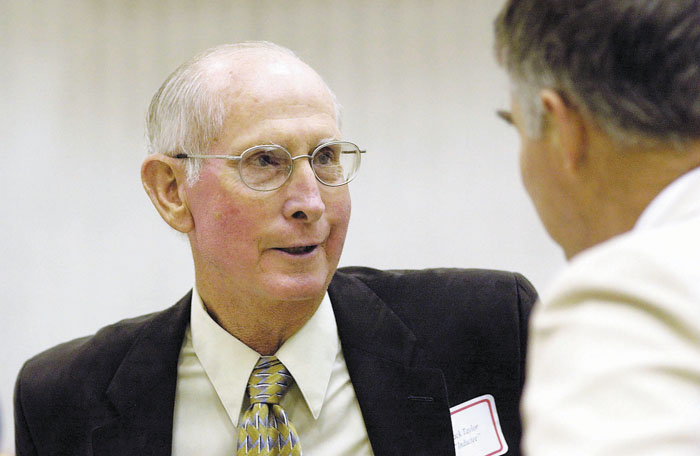 JON C. LAKEY/SALISBURY POST FILE PHOTO ... Byron “Jack” Taylor, at his induction into the Rowan -Salisbury Hall of Fame, on May 1, 2004. Taylor, also a member of the Catawba College Hall of Fame, was a great professional baseball pitcher, long-time business operator and a friend and mentor to local youth sports. He died last Saturday, at the age of 92.

ROCKWELL — He pitched against Whitey Ford and shared the diamond with Jackie Robinson.

He got Willie Stargell out, but Willie McCovey took him deep.

Local legend Jack Taylor, who died at 92 on Saturday, lived a remarkable life. Obviously, baseball was a major part of it.

Young people will remember Taylor as that bespectacled, sweet-natured guy who was a regular in the stands with his wife, Jackie, at Newman Park. Older people might remember him as a 6-foot-2, steel-armed pitcher who once dominated on the mound there.

Taylor is a member of the Salisbury-Rowan Hall of Fame. He was officially inducted in 2004 for his lifetime contributions to Rowan sports as a Little League coach in Rockwell (29 years, 10 championships), but before he became a patient, beloved coach, he was a special athlete. He entered the Catawba Sports Hall of Fame in 1985.

While he was universally known as “Jack,” he was named after his father, Byron Clay Taylor. He was born on Oct. 7, 1927.

He grew up in Landis. He chased foul balls for the town teams and pitched for the Boy Scouts. He’d frequently throw both games of doubleheaders. That’s how his right arm got so strong.

World War II provided a challenge for Catawba’s athletic programs. Most of the male students on campus played football. Taylor helped out the football and basketball teams, but he had come to Catawba for baseball and that’s the sport in which he shined for three seasons. They didn’t play nearly as many games then, but he went 18-3 from 1945-47. His career ERA of 1.74 is still the school record. In 1946, his ERA was 1.18.

Taylor’s college glory days took place long before Major League Baseball began drafting players in 1965. Taylor received pro offers from the Philadelphia Phillies and from the Atlanta Crackers, who were still a high-powered independent team in 1947. Taylor signed with the Crackers when they offered $2,500. His father had passed away, and that was a lot of money then.

The Crackers assigned Taylor to the Landis Millers. That was a dream come true, pitching for his hometown team in the Class D North Carolina State League. He was 19. He threw 200 innings and won 10 games.

Taylor’s pitching arsenal was simply a fastball and curveball, but he could deliver both from three different arm angles. That gave him an assortment of six pitches.

Taylor debuted with the Atlanta Crackers in 1949. When the Brooklyn Dodgers were heading north from Spring Training, they made a three-game stop in Atlanta to take on the Crackers.  Robinson’s appearance in Atlanta brought an overflow crowd of black fans to Ponce de Leon Park.  They saw Robinson steal home.

In 1950, Taylor pitched for the Denver Bears and won 12 games. He also received his draft notice from Uncle Sam.

The Korean War was raging, but Taylor was stationed stateside. When his platoon was sent to West Point to provide bridge-building instruction, he found himself in an exhibition game in Newburgh, N.Y., pitching against  a U.S. Army team stationed in New Jersey. His mound opponent was Ford, who also had been drafted in 1950.

The highest level of baseball Taylor reached was with the Double A Crackers in 1950. He returned to the Crackers in 1953 after he was discharged from the service, but he quickly realized he didn’t have quite the same stuff he’d had in 1950. He knew he wasn’t going to to make it to the big leagues.

He’d gotten married in the summer of 1952 to Jackie Bost, Catawba’s homecoming queen and the school’s award-winner as the most outstanding senior girl.

So Taylor was looking to settle down. Taylor’s, the “five and dime” variety store they opened in Rockwell in 1953, kept both Taylors busy.

Still, Taylor’s baseball career was far from over.

While he had a full-time day job, he still pitched at night. The Crackers had sold his contract to the High Point-Thomasville Hi-Toms of the Class B Carolina League.

Taylor worked fast, threw strikes, and his games at Finch Field were over quickly. He’d pitch nine innings and still make it home in time to watch the highlights of his game on the television in his living room.

The Hi-Toms played Danville, but the rest of their opponents were in North Carolina. There weren’t many overnight trips.

The Hi-Toms were affiliated with the Cincinnati Reds, so Taylor got a chance with the big-league Reds in Spring Training in 1956. He threw three shutout innings against the Chicago White Sox in a preseason game. He looked great against Brooklyn and even got a mention in the 1956 Street & Smith baseball edition as a promising rookie, but he didn’t make the opening day roster.

The Reds offered him a Triple-A contract, but that would’ve meant going to Seattle, and Taylor wasn’t interested in going that far from home. So he returned to High Point and, with the help of young center fielder Curt Flood, had his greatest season in the summer of 1956. McCovey, an 18-year-old who was doing some serious slugging for the Danville Leafs, homered off Taylor, but Taylor went 22-11, leading the league in wins and making the Carolina League all-star team.

In 1957, Taylor won 17 games and led the Carolina League with 24 complete games.

Taylor’s fantastic run with High Point ended in 1958 when he 19 wins, 21 complete games and a career-best 181 strikeouts. He won 85 games for the Hi-Toms in five seasons.

When the Hi-Toms folded, Taylor signed with Asheville and won 29 games in the South Atlantic League in 1959-60.

His final act in pro baseball came in 1961 when he was 33 years old. He won the Rawlings Silver Glove that season as the best fielding pitcher in the minor leagues. Pitching for the Charlotte Hornets, he went 17-12 with a 2.98 ERA. He retired the 21-year-old Stargell on a routine fly ball to close the 1961 South Atlantic League All-Star Game.

In his final game on a pro mound, Labor Day, 1961, Taylor pitched a one-hitter for the Hornets against Knoxville. It was quite a farewell to the game.

All told, he pitched in 452 minor league games, threw 2,797 innings and completed a remarkable 209 games.

He won 182 games in 13 minor league seasons. When you put that alongside his 18 Catawba wins, he had 200 victories at a high level.

When the birds started singing in the spring of 1962, baseball tugged at Taylor’s right arm and heart, as it always did, but this time he stayed home with growing businesses and a growing family.  There was another variety store, Noah’s in downtown Landis, to look after by then. Taylor and his wife operated Taylor’s and Noah’s until they retired in 1997.

Taylor began coaching Little League in the 1960s and was the pitching coach when East Rowan Little League won a state championship in 1990.

In 1995, he was honored with the Heroes Award from the Sporting Goods Manufacturers Association for his work with Little Leaguers.

In 2004, the Taylors established a scholarship at Catawba to provide financial assistance to one of the young men from Rowan County who carries on the baseball tradition at Newman Park.

Maybe the day will come when one of them break’s Taylor’s ERA record.

Visitation is at Powles Staton Funeral Home of Rockwell tonight from 6-8 p.m.

The funeral will be held at Rockwell’s Ursinus Church of Christ on Thursday at 2 p.m.