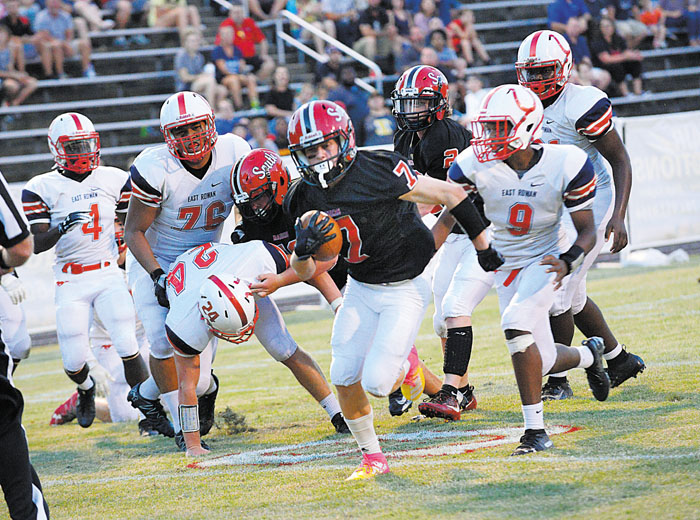 South Rowan's Nathan Chrismon (7), shown during an earlier game this season. The Raiders fell to Thomasville on Friday night, 57-7. ... File photo by Wayne Hinshaw, for the Salisbury Post

LANDIS — No matter how much grief this season dishes out, South Rowan’s football team keeps coming back for more.

The free-falling Raiders were administered another dose of Central Carolina Conference tough love Friday night, when they allowed eight touchdowns and dropped a 57-7 decision to visiting Thomasville.

“Our biggest problem right now is experience and age,” coach Daniel Yow said, moments after South (1-7, 1-5) lost its fifth straight league game and fell to 0-4 at home. “We have this mindset that we can take this play off, but win the next play. Football is not that giving. You take a play off and bad things happen to you on both sides of the ball.”

Thomasville (5-3, 4-2) marched for touchdowns on each of its first six possessions, then used a 21-yard TD run by backup quarterback C.J. Dickerson and a 71-yard pick-six by defensive back Jordan Williams to salt the game away in the fourth quarter.

“We expected a good effort from South,” said winning coach Doug Robertson. “We expected them to be a good football team. But I think our guys had more to do with this than they did.”

Thomasville’s best guy appeared to be starting quarterback Landon Johnson, a 180-pound junior who gutted the Raiders for 141 yards passing and another 107 on the ground. He ran for three touchdowns and completed a 40-yard TD strike to Jordan Williams on the Bulldogs’ third play from scrimmage.

“They were running that inverted veer,” said South nose guard Remington Steele, a grizzled veteran. “It created confusion, not knowing who had the ball. You’d think one person had it and find out he didn’t.”

There were a handful of positives for South, now skidding toward the season’s finish line. It’s offensive line — a human turnstile most of the year — allowed only two sacks and helped the Raiders amass a season-best 190 yards rushing. Given time to calculate, senior quarterback Drew Huffman directed the offense to the Thomasville 27-yard line on the game’s opening drive, a 30-yard advance that stalled when he fired an incomplete pass on fourth-and-6.

“We didn’t score but we took six minutes off the clock,” Yow noted. “That’s what we wanted to do — keep their offense off the field as much as possible. Our offensive line played well and we had a new fullback, Harrison Shell, that played lights out.”

South’s next two possessions ended with turnovers — it finished with four giveaways — before the Raiders finally solved Thomasville’s bend-but-don’t-break defense. On a scoring sequence that began late in the first period, Huffman orchestrated an impressive, 73-yard, 19-play drive that culminated more than six minutes later with his 3-yard sneak into the end zone. It trimmed SR’s deficit to 21-7.

“That was our whole game plan,” said slot back Nathan Chrismon. “Run right at them and get first down after first down.”

Shell, a 225-pound junior who switched from the offensive line, burrowed his way for 30 yards on eight carries. Teammates Brayden Garrett (69) and Chrismon (61) combined for 130 yards. That’s nothing to shout from the rooftops, but a sign of progress.

“I think they just had a hard time stopping us,” Robertson said after Thomasville secured its third straight triumph.

Williams, a senior DB with the gift of grab, had two interceptions for the Bulldogs, eliciting high praise from Robertson. “Jordan Williams is one of the best football players in this league,” he gushed.

Huffman and the Raiders had to agree. “We just didn’t have enough energy,” Chrismon said. “We didn’t come out to play. They weren’t better than us, but they played a better game.”

All of which makes next Friday’s game at last-place Lexington all the more intriguing.