Salisbury improves to 5-0 with another shutout 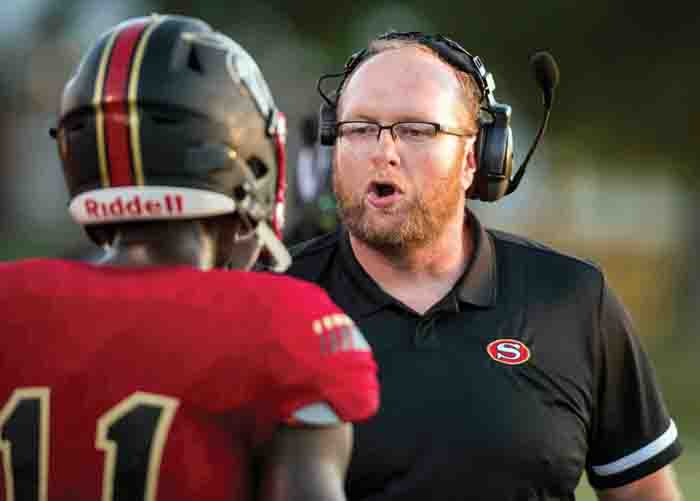 Or his team’s inability to generate much offense of any kind in a season — that has totaled just 30 points.

“The biggest hinderance is ourselves and that’s just part of teaching these young men right now,” said the veteran coach, who is in his first year atop the Jackets’ program. “They’ve just got to continue to believe in themselves and play for themselves. When you come into a program and try to change the culture, you’ve got to build relationships with these kids and earn their trust.

Salisbury was once again stingy on defense and showed enough flash on offense to run its record to 3-0 in the CCC and 5-0 overall.

And this one was over early after a lengthy lighting delay at the end of the third quarter, resulting in the game being stopped.

Four different Hornets scored in the visitors’ workman-like victory, and junior quarterback Vance Honeycutt was back on the field after being sidelined with an injury since the second week of the season.

“Yeah we won and we’re 5-0 and all that, but we’re not playing to the best of our ability,” said Hinson. “Tonight, I didn’t think we had much energy and I don’t think we had a good week of preparation. I am challenging our kids to be great because I think we can be. My job is to also coach better and harder.”

After two turnovers — one by each team — in the game’s first three plays from scrimmage, the Hornets eventually settled in to find the end zone first. Salisbury marched 84 yards in a whopping 18 plays, eating up nearly eight minutes off the clock, scoring on a six-yard run from freshman JyMikaah Wells.

The Hornets struck again with less than a minute to play before halftime on Jabril Norman’s 1-yard TD run. That short drive was setup by Patrick Taylor’s long punt return.

Then on the third play of the third quarter, Taylor was on the receiving end of a nicely thrown go route by Honeycutt that resulted in a 62-yard scoring strike, making it 21-0.

Honeycutt, who is a North Carolina baseball commit, shook off the rust in the third quarter to throw for 101 of his 117 total yards.

The Hornets later got a six-yard scoring scamper from Mike McLean, capping an 85-yard drive, making it 28-0.

The game was halted between the third and fourth quarters with Salisbury driving again at the Jackets’ 22-yard line.

Rahmel Ewart was the only Lexington player to generate any positive yardage, gaining 61 yards mostly from quarterback scrambles.

“I like Rahmel at quarterback, but we’ve just got to find a way to string some positive plays together,” said Holman, whose club is now 0-3 in the league, 1-4 overall. “At some point, things are going too click. Until then, we’ve got to keep working, practicing and getting better.”

NOTES: Salisbury has now won 16 of the last 17 meetings against Lexington, with the Jackets’ lone win during that period a 17-14 victory in 2015. … Jamani Wallace had an interception for Lexington, which travels to Ledford next Friday. … The Hornets host Central Davidson next Friday before traveling to Oak Grove and Ledford the following two weeks to determine CCC supremacy.

Panthers’ Newton says he needs ‘time away from game’…