North Davidson way too much for Raiders 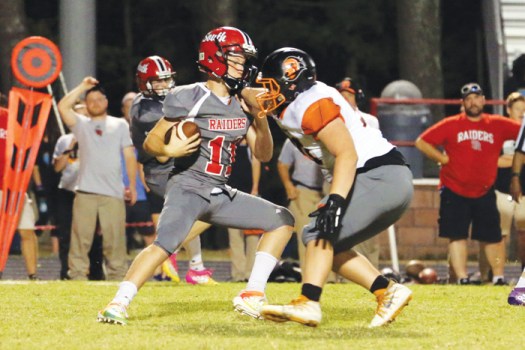 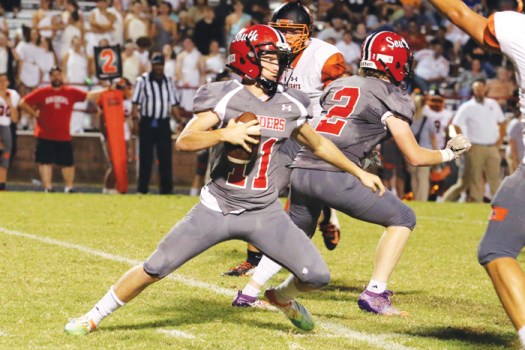 South Rowan QB #11 Drew Huffman has to pull the ball down and scramble against a tough North Davidson defense. James Sipes for the Salisbury Post 9/27/2019 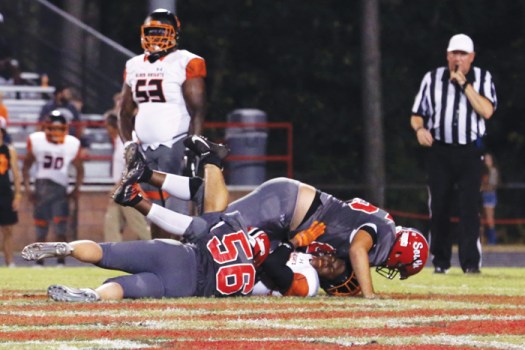 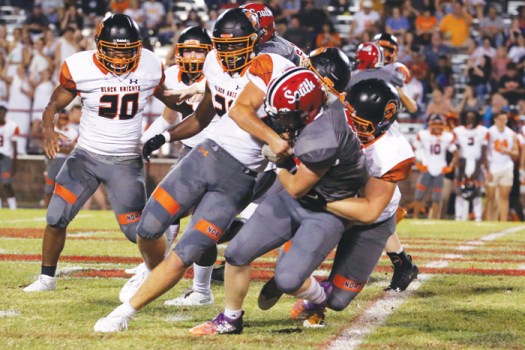 South Rowan running back #2 Brayden Garrett picks up 11 yards up the middle before being brought down. James Sipes for the Salisbury Post 9/27/19 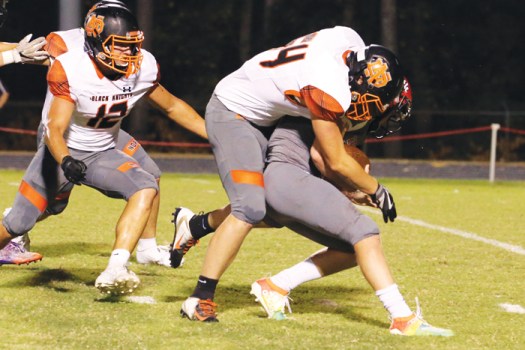 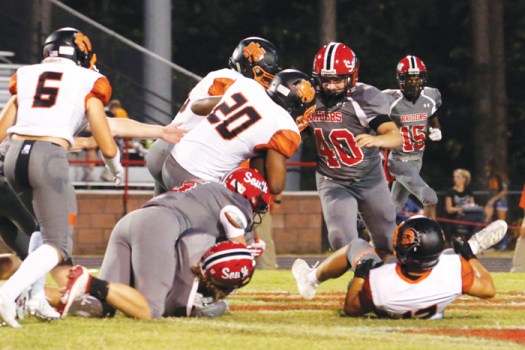 South Rowan’s #40 Andrew Watkins, tries to stop North Davidson’s #20 Darain Green from picking up a first down. James Sipes for the Salisbury Post 9/27/2019

LANDIS — Throw this one in the dumpster and forget it.

That was the message from coach Daniel Yow and the South Rowan football team after Friday night’s 52-14 Central Carolina Conference loss to visiting North Davidson.

“North Davidson is just better than us right now,” Yow said, moments after South (1-4, 1-2) was thrashed for the second straight week. “We’ve got a lot of work to do in the off-season and on the field to be able to compete with the teams in our conference. We’re not gonna let this game continue to beat us. We’ll look at film and let it go — and get ready for next week.”

South will limp forward with a porous offensive line and a backpedaling quarterback — senior Drew Huffman — who was sacked seven times and has spent more time on his back than Michelangelo. That makes 11 takedowns in two weeks.

“He’s my best friend,” senior center Dawson Mushala made it known. “I truly feel bad for him and bad that we can’t to give him more time back there. Our varsity line is very young, super young. So it comes down to hitting the weight room. They were bigger, stronger and faster than us. They’ve obviously hit the weight room more than we have.”

Huffman completed just three of 13 passes, but one was a 68-yard touchdown throw to wideout Nathan Chrismon in the first quarter. The sophomore found a seam in North’s secondary and scored on a runaway sprint down the middle, drawing South to within 14-7. Later, relief pitcher Jordan Eagle lofted a too-late-to-matter, 14-yard TD strike to Logan Perry, closing the scoring. Other than that, there was little for South’s faithful to applaud.

“I hate that this happened,” Yow said. “But I’m still proud of my guys for fighting all the way through. The scoreboard and our record doesn’t reflect how hard we’ve been working these last few weeks.”

North (2-3, 2-1) simply huffed and puffed and began blowing South’s house down in the opening quarter, when it scored on its first four possessions, to build a 28-7 margin. Lefty quarterback Tedric Jenkins — a Lexington transfer — went 7-for-7 for 176 yards and three touchdowns in first period.

“They were hard to defend,” said South linebacker Andrew Furr. “The quarterback threw a lot of slants that we just missed. He was very fast, very agile, made good reads and a lot of smart decisions.”

By halftime, Jenkins had 312 passing yards and the Black Knights owned a 45-7 lead. He finished 14-for-20 for 317 and added a second-quarter touchdown run. Following a 56-minute lightning delay, North defensive back Kendred Tetter picked off a Huffman pass and returned it 27 yards for a TD, triggering a running clock with 8:37 remaining in the third quarter.

“Their quarterback looked good. He looked sharp,” Yow said. “Their regular starter tore his ACL two weeks ago. (Jenkins) may have had some first-time jitters running the show for them last week, but he’s had two weeks to prepare and was ready to throw against us tonight.”

Furr — a 6-foot-2, 185-pound senior who called the loss “degrading” — said the Knights may have thrown South a curveball. “They ran an RPO (Run-Pass Offense) kind of thing,” he said. “But on film, they gave it to the running back a lot more. Tonight, we tried to take away the run but got beat on pass plays.”

Yow agreed. “They did a good job running their RPO system,” he said. “On our side the ball, we were just out of position too many times. It was nothing physical, nothing like that. We were just in the wrong spot at the wrong time.”

South is certainly in a difficult spot. It must quickly regroup for next Friday’s game at unbeaten Oak Grove.

“This was a good learning experience,” Mushala concluded. “And good practice for moving forward. But it’s mostly a game we we need to forget about.”

NOTES: South’s Mahleek Sprull recovered a fumble early in the second quarter, but the Raiders turned it right back over two snaps later. … South defensive lineman Harrison Shell was ejected following his second unsportsmanlike conduct penalty with 4:55 left in the second period. Teammate Jackson Deal, a receiver and punter, suffered a lower left ankle sprain with 3:27 remaining in the first half. … North finished with 404 yards total offense. South was limited to 205.