Rooney wants another trip to MLS playoffs before going home 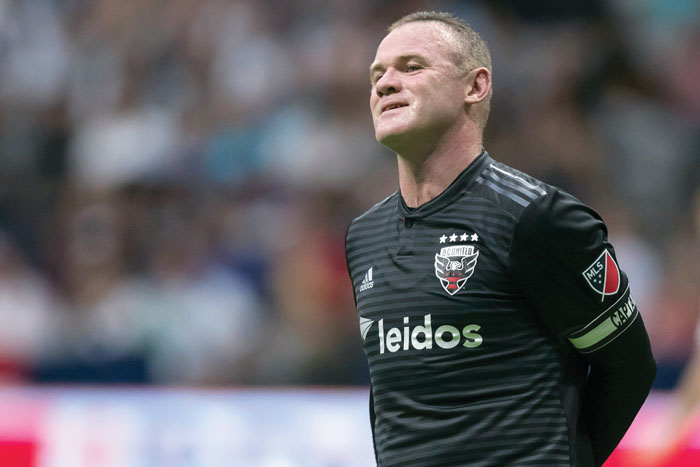 FILE - In this Aug. 17, 2019, file photo, D.C. United's Wayne Rooney reacts after putting a shot over top of the Vancouver Whitecaps' goal during the first half of an MLS soccer match in Vancouver, British Columbia. As his Major League Soccer career draws to a close and he prepares to return home, Wayne Rooney would like one more shot at the playoffs stateside. (Darryl Dyck/The Canadian Press via AP, File)

As his Major League Soccer career draws to a close and he prepares to return home to England, Wayne Rooney would like one more shot at the playoffs.

The longtime Manchester United and English national team striker is in the final regular-season stretch with D.C. United, which is 12-10-9 this season for fifth in the Eastern Conference. There are three games to go, including Sunday’s match at home against the Sounders.

“I know mathematically it doesn’t put us in a playoff spot just yet, but I think we have to lose every game and the teams outside the playoff spots have to win every game, and if that happens then we don’t deserve to be in it,” Rooney said.

Rooney is playing out the season with United before the next stop in his storied career: he’s taking over second-tier Championship team Derby County as a player-coach in January.

His return to England will end an MLS stint that began in June 2018 when he agreed to a deal with United worth a reported $13 million.

Rooney left Manchester United after 13 seasons in 2017 and spent a year with Everton, where he started his career. He is the all-time top scorer for England (53) and Manchester United (253).  He scored 208 goals in Premier League play, second only to Alan Shearer’s 260.

After winning just nine matches and finishing outside of the playoffs in 2017, United was sparked by Rooney’s addition midway through the 2018 season — as well as the opening of Audi Field — and wound up fourth in the East. The team’s playoff run was short, however, as United was eliminated on penalties after a 2-all draw with the Columbus Crew in the knockout round.

Currently NYCFC sits atop the East as the season winds down. Major League Soccer went to single-elimination playoff rounds this year and expanded the postseason to include 14 teams, seven from each conference. The all-knockout postseason replaces the two-legged format for the conference semifinals and finals that the league started using in 2003.

“I think we know we’re not the best football team in the league, we like to try to make games a bit scruffy at times and work hard and dig in and try and make the three points,” Rooney said. “That’s how we’ve won most of our games this season, so we all need to work together to do that. It will be tough, of course, but if we do that we’ll give ourselves a good chance.”

“Last year with the addition of the stadium, that brought a new energy to the fan base and community. Wayne doubled down on that and has energized the fan base, the team and the organization,” Olsen said. “He continues to be a big piece of this. He’s been a joy to manage so far and we’re looking forward to the little time we have left with him.”

The team is already building toward a future without Rooney. This week, Union announced the return of midfielder Yamil Asad for the 2020 season. Asad played for United in 2018 on loan from a first-division club in his native Argentina, and he had nine goals, including the team’s first goal in the opening game at Audi Field.

Rooney’s new job will present different challenges for the 33-year-old. Derby has been out of the Premier League since 2008 and lost a playoff final in May to return to the top division. His former England teammate, Frank Lampard, was in charge of Derby last season before moving to manage Chelsea.

Rooney said he’s relished his chance to play in MLS. He’s been getting cheers on the road for the past couple of weeks since he announced his move.

LISBON, Portugal (AP) — Portuguese prosecutors are bringing 154 charges against an alleged local hacker they believe is linked to the publication of internal documents that embarrassed top European clubs and soccer officials in the Football Leaks case.

A statement from the attorney general’s office Thursday said Rui Pinto, who is in custody in Lisbon after being extradited from Hungary, is accused of alleged crimes connected to the release of secret information about the financial dealings of clubs.

The accusations include illegal access to data and attempted extortion.

The statement says the Football Leaks website published confidential information about players’ and coaches’ contracts and transfer fees, among other things.

No trial date has been set.