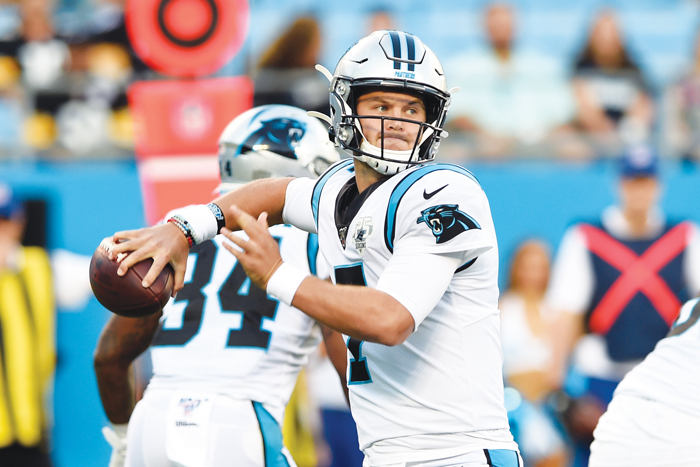 FILE - In this Aug. 29, 2019, file photo, Carolina Panthers quarterback Kyle Allen (7) passes against the Pittsburgh Steelers during the first half of an NFL preseason football game in Charlotte, N.C. With Cam Newton reaggravating his foot, the team is looking at the possibility of starting Kyle Allen on Sunday against Arizona, the first of four road games in the next five. Allen has just one career start. (AP Photo/Mike McCarn, File)

By STEVE REED AP Sports Writer
CHARLOTTE (AP) — Panthers coach Ron Rivera is confident backup quarterback Kyle Allen can get the job done if Cam Newton can’t play Sunday against the Cardinals, a scenario that seems increasingly likely each day.
Allen took reps with the first team again Wednesday after Newton missed his second straight day of practice with a mid-foot sprain. If Allen’s number is called, he would start Sunday against his former college teammate Kyler Murray and the Arizona Cardinals
“Kyle is a very bright quarterback who understands the game and grasps it very well,” Rivera said. “He’s got a good arm and he’s a good decision maker and he plays very fast. He has all of the intangibles you want in a quarterback.”
Rivera wasn’t ready to name Allen the starter, even though Newton remains in a boot after aggravating his foot injury last Thursday night in a 20-14 loss to the Buccaneers. He said Newton has still been involved in the quarterback meetings and is “doing all the things he needs to do.”
But all signs are pointing to Allen getting his second NFL start for the Panthers (0-2).
If that happens, it will mean a matchup between Allen and Murray, who split time at quarterback with Texas A&M in 2015.
Allen started the season and had the Aggies off to a 5-0 start but was benched after having three interceptions returned for touchdowns against Alabama and then struggling against Mississippi. Murray replaced him for three games before Allen returned as the starter to close the season.
After that season, both QBs transferred — Allen to Houston and Murray to Oklahoma.
“It’s wild,” Allen said of the prospect of facing Murray. “We were together at A&M for seven months there and then split and went different ways. Seeing his career and my career, they were two completely different paths.”
Allen went undrafted in 2018, while Murray was the No. 1 pick in the NFL draft earlier this year.
It would also be a homecoming for Allen, who grew up in Scottsdale, Arizona and attended several NFL and college games at the Cardinals’ home stadium, including when Newton led Auburn to a win over Oregon in the 2011 BCS national championship game. Also, Allen’s best friend is Cardinals wide receiver Christian Kirk, another former Aggies teammate.
The Panthers don’t have much film on Allen, but what they have they seem to like.
Allen led Carolina to a 33-14 win over the Saints in the 2018 regular season finale in his only NFL start. He had three touchdowns in that game — two passing and one rushing — before exiting in the fourth quarter with an injury. But he showed enough in that game to impress teammates and coaches with his confidence.
Allen said that game him immeasurable confidence and it carried over to this summer where he beat out rookie third-round draft pick Will Grier the No. 2 QB spot behind Newton.
Panthers veteran tight end Greg Olsen said Allen is incredibly confident, and nothing seems to faze him. He said that’s partly because the rollercoaster ride he experienced in college.
“You have those ups, you have those downs and you learn a lot about yourself,” Allen said. “Through all that crap that I went through in college, and even here, getting released last year, I think you build that resolve. You build that confidence. And no one can really take that from you.”
Said Olsen: “The biggest thing for him now is just gaining experience.”
He could get that with Newton sidelined indefinitely.
Olsen, who has known Newton as long as anyone in the Panthers locker room, said he knows Newton will be doing everything he can to get back on the field. He also said the 2015 league MVP gave him no indication that he’d reinjured his foot during the Bucs game, but said that doesn’t surprise him.
“Guys that play at a level like him, guys that play in this league a long time, you almost have to protect them from themselves sometimes,” Olsen said. “He’s going to play until you tell him otherwise. It’s just a credit to him and how he’s wired. You weren’t getting him off the field that game.”
NOTES: Panthers defensive tackle Kawann Short has missed the last two practices with a shoulder injury and outside linebacker Bruce Irvin remains sidelines after missing the first two games with a hamstring injury.
___
More AP NFL: https://apnews.com/NFL and https://twitter.com/AP_NFL

Charlotte is 41-point underdog at Clemson on Saturday