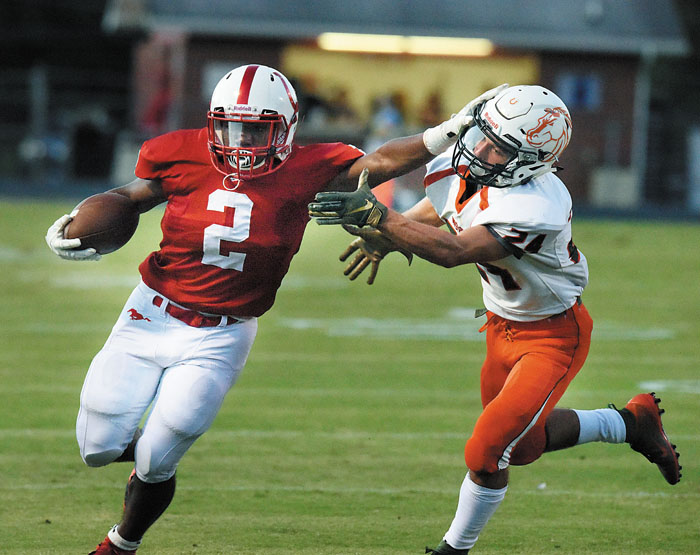 Wayne Hinshaw file photo/for the Salisbury Post ... East Rowan’s Sammy Pinckney (2) stiff arms East Lincoln’s Lucas McConnell (24), on his way to a gain, during a high school football game on Aug. 30. Pinckney is this week’s Friday Night Hero after a rushing for 277 yards against South Rowan.

GRANITE QUARRY — Ten years ago, a short back wearing a No. 2 jersey tore up the county and the state.

To put Parks’ ridiculous numbers in perspective, he rushed for almost 4,700 more yards than Nick Maddox, the dazzling A.L. Brown back who was a two-time state player of the year in the late 1990s. Maddox’s 114 career touchdowns were amazing, but Parks scored 44 more.

Now there’s another low-to-the-ground rusher who is proving a worthy wearer of the No. 2 jersey. East Rowan’s Sammy Pinckney (5-6, 170), the county’s leading rusher with 499 yards, is on his way to a banner junior season. If Pinckney can stay healthy, he’ll rewrite the record books — at least in Granite Quarry.

“I’m just playing the game,” Pinckney said. “I don’t have goals as far as numbers. My only individual goal is to reach my potential in high school.”

Pinckney played the game well on Friday. He rushed for 277 yards in East’s 42-14 victory against South Rowan. He could have gotten a lot more. He had 270 after three quarters and carried only once in the fourth. But the Mustangs (2-1) had the well game under control, and keeping Pinckney healthy for future outings easily took precedence over piling up bigger numbers.

Pinckney had a 46-yard touchdown on East’s fourth snap. He broke a 77-yarder in the second quarter to give the Mustangs the lead for good. Then he added a short scoring burst in the third quarter. Those were his first three TDs of the season.

“We prepared to play the best we could and our guys upfront (tight end Jacob Daubenmire and linemen Josh Samoa, Josh Teeter, Colby Lovingood, Dylan Goodnight and Dylan Courtney) did a great job of opening holes,” Pinckney said. “Those were big holes, and I was able to cut right through.”

When the dust settled, Pinckney, who has been getting varsity carries since he was a freshman, owned the third 200-yard game of his career. It was the third-biggest rushing night in East history, trailing only Cal Hayes Jr’s 344 yards against Robinson in 2001 and Max Wall’s 302 against Cox Mill in 2016.

Career-wise, Pinckney rolled past the 2,000-yard milestone against the Raiders. He’s only the eighth Mustang to break that barrier, and he has the rest of this season and 2020 ahead of him.

“Sammy spent the first couple of weeks last season trying to find himself, but he figured things out by our third game,” East head coach John Fitz said. “For a lot of running backs, it’s about getting into a rhythm, and against South Sammy got into a rhythm and our offensive line did, as well. And once we get a rhythm going, Sammy is hard to stop.”

Pinckney doesn’t look imposing at first glance — he’s not as thick as Parks nor a graceful as Maddox — but he has super-strong legs and unusually large hands and feet (size 12 1/2) for someone of his stature.

“He’s not only strong, he’s built low, and that low center of gravity makes him hard to tackle,” Fitz said. “And he has really good vision. Vision is a perishable skill. Backs can lose it in the offseason and it takes it a while to come back. He’s got it now.”

Pinckney rushed for 1,304 yards as a sophomore.

He carried 33 times — A Parks type of workload — in East’s opening win against North Stanly. He was held to 75 yards on 20 carries by an East Lincoln team that was better than anyone expected. But then he had the huge night against South to get back on track.

Pinckney has helped East find its identity.  The Mustangs are going to be a power-running team operating mostly between the tackles. They’re not going to throw it a lot, but they should be able to run it so well that they’re going to be able to throw it whenever they want to, not when they have to.

“We’ve got an offensive coordinator, Randy Kaiser, who has no ego,” Fitz said. “He’s a little different in that he gets a lot of input from our kids. He’ll ask them what do they think will work, what do they want to run. That’s part of why we’re running it as well as we are. We’ve got a system that  fit our kids well. We’re a blue-collar team, a down-hill running team.”

When coaches talk about running downhill, they’re not talking about playing on a slope. They’re talking about going forward, north and south, hitting holes hard between the tackles, rather than running east and west and trying to turn the corner.

Pinckney has the kind of speed that can create big plays and breakaways, but it all starts with his willingness to be physical inside.

Fitz encourages players to participate in multiple sports. Pinckney also plays basketball and runs track (for Fitz), endeavors which help keep him in shape for football.

But football definitely is his thing.

And while he’s not worried about the stats and record books, it appears he’s well on his way to a career that people will remember.

McCoy won’t allow himself to get overhyped against Bucs