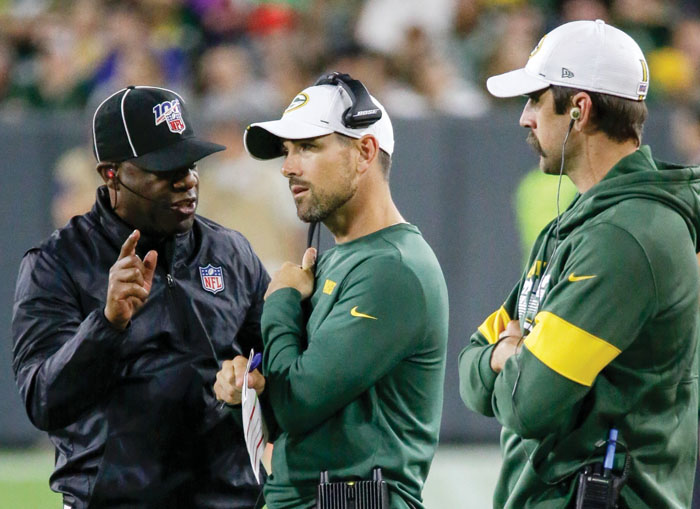 AP Photo/Mike Roemer... Green Bay Packers’ Aaron Rodgers watches as head coach Matt LaFleur talks to an official during a preseason NFL game against the Kansas City, last Thursday. The season starts for real on Thursday, as the Packers take on the Bears.

GREEN BAY, Wis. (AP) — How much freedom will Aaron Rodgers have in coach Matt LaFleur’s offense? Will he be able to change plays at the line of scrimmage?

LaFleur said Monday that Rodgers will have a “green light” to change plays in order to put the offense in the best position to succeed.

As the Rodgers audible-related questions continued Tuesday, LaFleur, visibly annoyed, looked to put an end to all the chatter.

“You guys just will not stop with this audible thing,” the first-year coach said. “It’s unbelievable. What do you guys want me to say?

“We’ve always had adjustments within our plays, it’s just we called it something different,” LaFleur said. “And the fact that I didn’t call it an audible, everyone’s running wild with it. It’s comical to me. But like I’ve said, I feel good with what we’ve got in our plan, how we’ve gotten to this point and I’m confident that he’s got a total command and control of what we’re trying to get done.”

The questions will likely be answered on the field Thursday night when LaFleur, Rodgers and the Packers open the regular season in Chicago.

Rodgers will face the same defense that forced him out of the game and into the locker room in the second quarter of the season opener last season.

After having his left knee evaluated, the two-time MVP returned in the second half and threw three touchdown passes to help the Packers overcame a 20-point deficit in a thrilling 24-23 win at Lambeau Field.

“That was an exciting game, one that ranks up there for me in all-time games and best experiences on the field,” Rodgers said on Sunday.

But that was last year.

This is a new year and a new offense.

“I think everybody needs to understand this is going to be the first iteration of our offense and because it’s a new scheme and there are new pieces, this is going to grow from this point,” Rodgers said. “I’m excited about the stuff we have in and the stuff we’ve been working on in camp. There’s going to be even more. I think that’s the exciting part.”

The crucial part for the Packers will be keeping Rodgers upright. Linebacker Khalil Mack and the Bears’ defense had four sacks in last season’s opener and another five when the teams squared off again in Week 15.

“And the thing is, it’s not just Mack,” LaFleur said. “They’ve got a couple guys that are like that. That’s what makes it so challenging. You focus on one guy and the next thing you know, you’ve got (linebacker Leonard) Floyd or (defensive tackle Akiem) Hicks in your backfield as well. They’ve got a lot of good pieces across their defense that you have to account for on each and every play.”

Chicago defeated Green Bay 24-17 in the December 2018 matchup and clinched the NFC North.

The Bears held Rodgers without a touchdown pass and put an end to his NFL-record streak without an interception in the rematch. Rodgers’ had thrown 402 passes before getting picked off by safety Eddie Jackson.

“Obviously it starts up front, being able to protect and try and control the line of scrimmage and slow those guys down,” Rodgers said.

“Obviously they added a great young linebacker to the mix last year in (Roquan) Smith, they’ve got a couple of Alabama boys in the back end with Eddie and now (safety) Ha Ha (Clinton-Dix) and very solid, solid corners who are veteran players now and we’ve played against them for a number of years now.”

Chicago signed Clinton-Dix to a one-year deal in March after the former Pro Bowler spent his first four-plus seasons as Rodgers’ teammate. Rodgers said the Bears having Clinton-Dix will definitely add a new wrinkle to the rivalry.

“He was a lot of fun to be in the locker room with, to go to battle with, and I’m sure he’s talking about different things with my eye control or eye movement or pocket movement — different things that I like to do,” Rodgers said. “But it’ll be fun to play against him.”

NOTES: The Packers placed TE Jace Sternberger on injured reserve. Sternberger had an ankle injury and was seen walking through the locker room on Tuesday with a boot on his left foot. … ILB Oren Burks (chest) and WR Darrius Shepherd (hamstring) did not participate in practice on Tuesday. … CB Ka’dar Hollman (neck) remained in a red, no-contact jersey and was limited. CB Tramon Williams (knee) was also limited.

PATRIOTS START SEASON AT NO. 1 IN AP PRO32 POLL

NEW YORK (AP) — The NFL’s final four teams at the end of last season will start off as the top four going into the start of the 2019 season.

Which is not all that surprising. Even less so is the team at the top: the defending champion New England Patriots. The Patriots received eight of the 12 first-place votes for 376 points in balloting Tuesday by media members who regularly cover the NFL.

The Patriots will begin their quest for a seventh Super Bowl on Sunday night when they host the Pittsburgh Steelers. The two teams are tied for the most with six.

“The defending champs have a chance to make it to three straight Super Bowls, and who’s going to say they don’t have a chance? Even with a 42-year-old quarterback and a 67-year-old coach,” Newsday’s Bob Glauber said of Tom Brady and Bill Belichick.

The Kansas City Chiefs, who lost to the Patriots at home in overtime of the AFC championship game, earned two first-place votes for 357 points.

“Did defensive coordinators come any closer in the offseason to figuring out how to stop Patrick Mahomes?” Charean Williams of Pro Football Talk asked of the reigning league MVP.

The New Orleans Saints and the Los Angeles Rams, who met in the NFC championship game, each received a first-place vote and were third and fourth, respectively.

“After two excruciating playoff setbacks, the Saints are poised to represent the NFC in Miami Feb. 2,” said Ira Kaufman of Fox 13 in Tampa, Florida.

Those two teams started a run of five consecutive teams from the NFC in the poll.

The Philadelphia Eagles and Chicago Bears, who faced off in a memorable NFC wild-card game last season, followed at Nos. 5 and 6, respectively. The Eagles advanced when Cody Parkey missed a 43-yard field goal in the final seconds. The Bears have Eddy Pineiro as their kicker now as they host the rival Green Bay Packers on Thursday night in the NFL’s regular-season opener.

“Secondary issues critical with (Vic) Fangio gone,” Fox Sports’ John Czarnecki said of the former Bears defensive coordinator who was hired in the offseason to be the head coach of the Denver Broncos.

The Seattle Seahawks follow at No. 7 after making a big trade for defensive lineman Jadeveon Clowney last weekend.

The Pittsburgh Steelers will have a different look on offense this season now that wide receiver Antonio Brown is with the Raiders and running back Le’Veon Bell with the New York Jets. They will start the season at No. 8.

The Los Angeles Chargers and the Dallas Cowboys, teams that both lost in the divisional round of the playoffs last season, are tied at No. 9 to round out the top 10 teams.

Great Escape: US gets past Turkey in World Cup