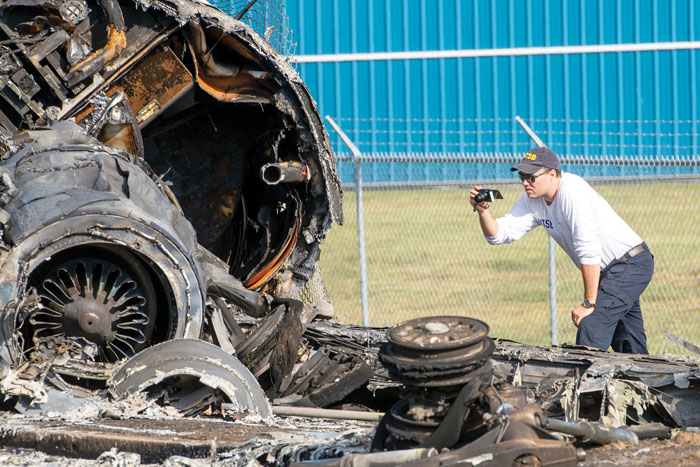 A member of the National Transportation Safety Board looks at the wreckage of a plane that Dale Earnhardt Jr., his wife and daughter and two pilots and a dog were on when it crash landed Thursday at the Elizabethton Municipal Airport in Elizabethton, Tenn., Friday, Aug. 16, 2019. Earnhardt Jr. will take the weekend off from broadcasting to be with his wife and daughter after the crash near Bristol Motor Speedway. (David Crigger/Bristol Herald Courier via AP)

Earnhardt Jr. posted his update on Twitter late Wednesday night, saying his lower back is sore and swollen. He’s receiving daily treatment “solely to get well to race.”

Earnhardt, his family and two pilots escaped a burning plane that veered off the runway at Elizabethton Municipal Airport in Tennessee last week.

Earnhardt won NASCAR’s most popular driver 15 straight times from 2003 through 2017. He retired two years ago and is an NBC racing analyst.

Darlington is Earnhardt’s one race this season.

Denny Hamlin was among those who saw the clip and then donated $5,000 to his fellow competitor. The gesture brought more attention to DiBenedetto’s plight and ultimately a partial sponsorship that helped him get through the 2018 season.

So there was a twinge of sadness for Hamlin after he chased down DiBenedetto in the closing laps of Saturday night’s race at Bristol Motor Speedway and denied the underdog an upset victory. DiBenedetto had learned four days before the race that Leavine Family Racing wasn’t bringing him back for a second season, and a Bristol victory would have been a tremendous résumé boost during free agency.

Hamlin, who immediately apologized to DiBenedetto and crew chief Mike Wheeler for beating them when he climbed out of his car, said later that he and DiBenedetto aren’t particularly close but his donation last year harkened back to Hamlin’s early racing days.

“I just thought to pay it forward. Someone gave me that opportunity, kept my career going,” Hamlin said. “I think a lot of people have a lot of respect for him. He’s humble. This is not a story of he’s just going to go away. This is only the beginning for him. He’s writing his résumé on TV every weekend.”

DiBenedetto was enjoying the best season of his career in his Toyota driving for a tiny team that has aligned itself with Joe Gibbs Racing. Wheeler, who won a Daytona 500 with Hamlin, is under contract to Gibbs. The team gets a ton of assistance from the Gibbs group, and Gibbs has too many drivers under contract and not enough Cup seats to keep everyone happy.

Someone had to go to make room for Christopher Bell’s promotion from the Xfinity Series next season, and DiBenedetto got the boot even though this is his best year statistically in every measurable category in his five full Cup seasons. His fight to keep a job at NASCAR’s top level has left a mark on Hamlin, who recalled the moment his career nearly ended in 2002 when his parents ran out of money to continue funding his late model racing.

“My parents said, ‘No, this is it. We’re about to lose everything, so this is it,’” Hamlin said. “I’m just going to work at my dad’s trailer shop.  That’s my future. That’s what I’m going to do for the rest of my life. I was content with it. I really was.”

An intervention came from a rival team owner who heard Hamlin wouldn’t be at the final race of the season and didn’t feel his drivers would have beaten the best if Hamlin was not in the field. He initially offered the financial assistance to get Hamlin’s team to the final race, but a twist of fate put Hamlin in the owner’s car and he wound up second.

“Anyway, he said, ‘Tell your family to go ahead and sell everything, you’re going to drive for me next year,’” Hamlin recalled. “I thought about that when I saw Matt’s video that the team didn’t have the finances.”

Hamlin and DiBenedetto shared a heartfelt moment roughly an hour after the race when DiBenedetto found Hamlin on the NBC Sports set. Hamlin was in the middle of a live interview — some of it spent chiding car owners for not giving DiBenedetto a job — when he put his microphone down and embraced the runner-up. The two had a brief chat, then Hamlin leaned into DiBenedetto’s ear and delivered a lengthy message he said was between the two drivers.

DiBenedetto, who led a race-high 93 laps, was near tears as the crowd drowned him in cheers during his interviews broadcast inside the track. The victory would have put him in the playoffs, albeit with a team not ready to compete for the title. The Bristol win would not have saved his job at Leavine, but if nothing else, it supported Hamlin’s argument that a car owner needs to hire DiBenedetto for next year.

First-round fireworks: Serena, Sharapova to meet at US Open