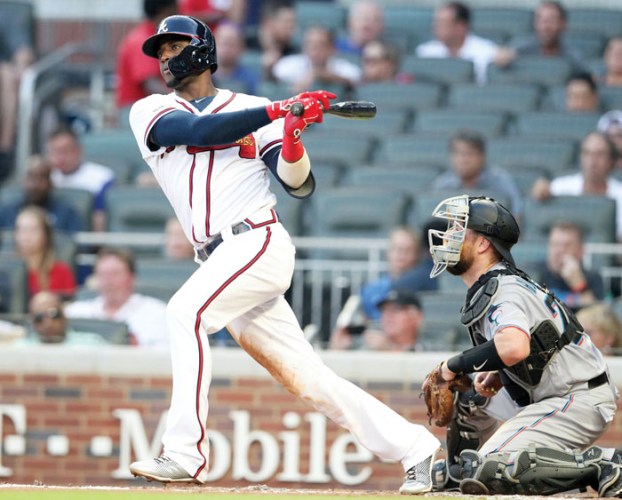 ATLANTA (AP) — Ronald Acuña Jr. hit an RBI single with two outs in the ninth inning and the Atlanta Braves won their fifth straight game, finishing off the Miami Marlins 3-2 on Thursday night.

Freddie Freeman hit a tying homer in the eighth and the Braves sent Miami to its 12th road loss in a row, the longest streak in the majors this year.

The NL East-leading Braves went 15-4 against the Marlins this year.

Adeiny Hechavarría opened the Atlanta ninth with a double and later scored on Acuña’s single off Ryne Stanek (0-3).

Freeman’s 34th homer, an opposite-field drive to left, came off Stanek, who lost his first decision since being acquired from Tampa Bay.

Mark Melancon (5-2) faced four batters in the ninth to earn the win.

Braves starter Mike Soroka hasn’t won a decision in seven straight starts. The 22-year-old All-Star was still hard to solve, allowing a single in the second and another in the sixth before Brian Anderson and Neil Walker singled in the seventh and both scored to make it 2-1 on Starlin Castro’s double.

Soroka, tied for the second-best ERA in the majors at 2.41, allowed no walks and struck out five in seven innings.

Alcantara took a shutout into the eighth inning of his last start against Atlanta on Aug. 10.

Marlins 1B Walker snared Rafael Ortega’s liner in the second to double up Hechavarría and prevent a runner from scoring from third.

Miami has allowed a homer in 23 straight games, the fourth-longest streak in major league history and three off the mark shared by Baltimore in 2017, Seattle in 2004 and Houston in 2001.

Braves: SS Dansby Swanson (right foot contusion) was 1 for 2 with an RBI through the first four innings of his first rehab game at Single-A Rome on Thursday. … LF Austin Riley (right knee sprain) ran without pain before the game and will report to Rome on Friday.

Braves: RHP Mike Foltynewicz (4-5, 6.09 ERA) will pitch the first game of a three-game series at the New York Mets. Foltynewicz has a 19.96 ERA and opponents are hitting .344 against him with runners in scoring position.

By Doug Ferguson AP Golf Writer ATLANTA (AP) — Xander Schauffele was six shots behind before he ever hit a... read more